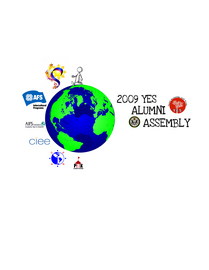 The Assembly – When YES Program started its operation in the Philippines in 2003, it drew together positive feedback hence came the success of the first batch of alumni —YES 2004-2005 participants. Since then, the returnees have been involved in volunteering both in their respective local communities and in the regional and national levels.

In the past three years, several YES Alumni have had the opportunity to attend trainings and congress meetings in the United States. These led to a series of plans to reiterate the skills and information acquired from each opportunity. Initially, a national YES Alumni assembly was planned for December of last year with proposed implementation by April of 2009. The pilot proposal was developed by Armieyah Ayob, Intejar Julkiram, and Rochelle Porras of YES batch 2004-2005 with Ridwan Landasan of YES batch 2005-2006 in General Santos City, Philippines.
The proposed assembly was put on hold when some of the YES Alumni took part in completion of their undergraduate academic duties.
However, the idea of the first national YES Alumni assembly is essential in pioneering the returnees’ involvement in significant operations of YES Program including addressing local and national issues. The national YES Alumni assembly core team sees that the skills and information acquired from their individual trainings are fundamental in enhancing awareness and promoting camaraderie amongst alumni members.
The national YES Alumni assembly will gear towards the empowerment of alumni members, encouraging them to become proficient and competent leaders willing and able to venture in the fields of volunteerism and service learning.
Text extracted from the 2009 National YES Alumni Assembly Proposal.
The aforementioned assembly is set to happen on October 27th to 30th of this year.
For more information, please contact Rochelle Porras, YES 2004 – 2005 Alumna and AFS Intercultural Programs Philippines Volunteer: roch.porras at yahoo.com.ph
Share: