ALAM in the Arts 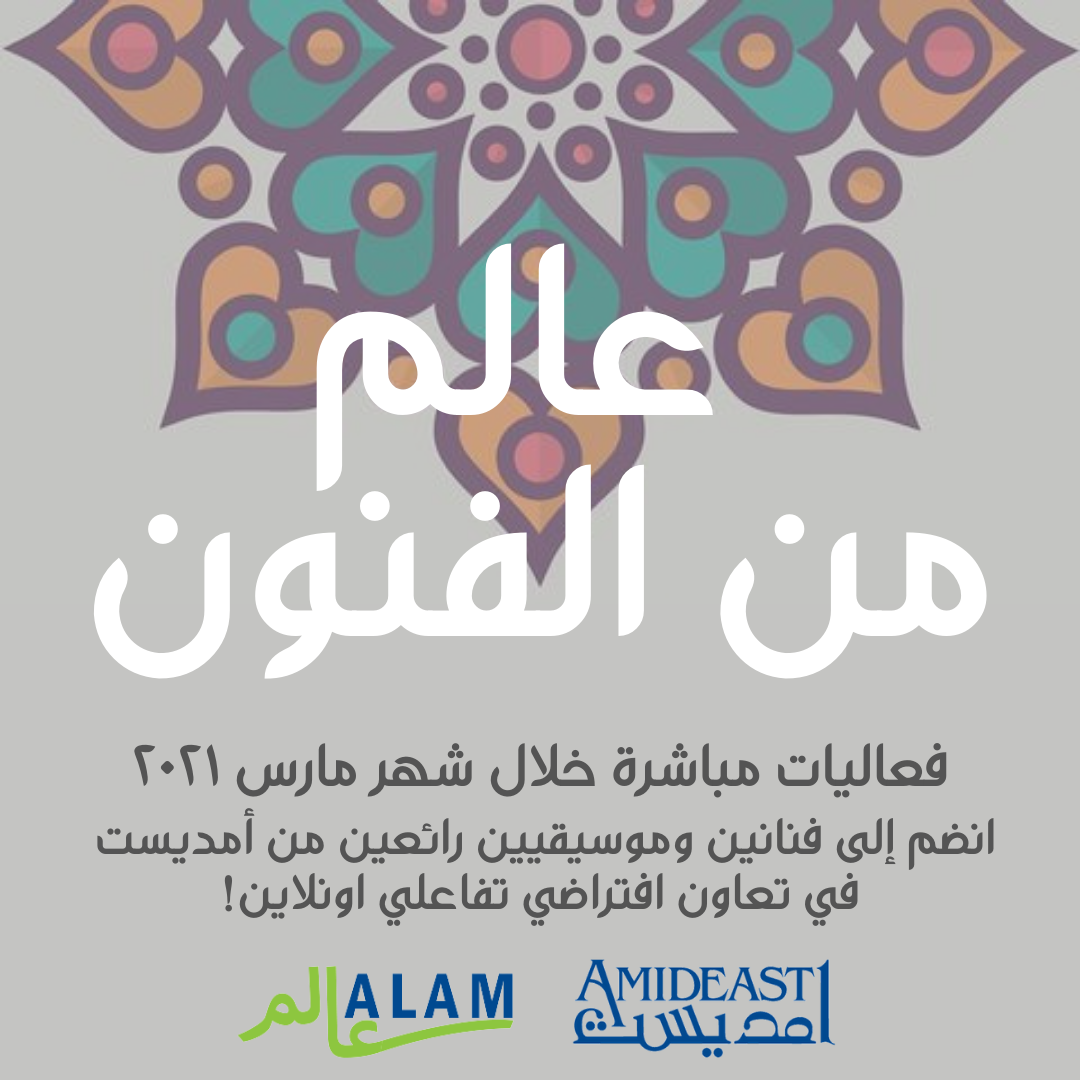 Throughout March, the AMIDEAST Leaders, Alumni, and Mentors (ALAM) network held a weekly online series showcasing artistic talent in the MENA region. The online series was called “ALAM in the Arts”, and it focused on four themes: Art for Personal Growth, Creative Writing and Poetry, Visual Arts, and Music. Read about the YES alumni who presented their artwork below:

On March 11, two YES alumni, Yahya Ashour from Gaza and Mohamed Ben Fredj from Tunisia, showcased their crafts in creative writing and poetry.

Yahya shared, “When I was a YES student, I tried to translate my poems from Arabic to English. Ironically, this exercise helped me become better at editing my writing in Arabic because I was able to see it from a different angle. My YES experience also allowed me to understand how societies function and influence people, which made me be better at writing about these observations.”

As a YES alumnus, Yahya led a project called “Write it Out”, where he trained ten young people from Gaza City to write poetry and then publish their poems online and in a print magazine. Yahya has also published his own work for various international magazines. Yahya is currently the main facilitator for an organization called Nawa for Culture and Arts, where he is responsible for organizing library activities. During his presentation for ALAM in the Arts, Yahya read two of his poems — one in English about loss, and another in Arabic.

To read more of Yahya’s writing, check out his website.

Mohamed Ben Fredj presented alongside Yahya in the Creative Writing and Poetry session, and began by explaining, “The way I define myself is not as a writer, not as a poet, but rather as a creative person playing at the intersection of arts and activism.” After his YES year, Mohamed delved deeper into his writing with his own poems and short stories. Mohamed is currently a first-year student at the American University of Beirut, where he is majoring in Media & Communications. Mohamed writes for American University of Beirut’s official publication, “Outlook Magazine”, and recently became the editor of the opinion section. He also writes for “Taleed”, an Arab youth magazine, as a staff writer.

When asked about the impact of his YES year, Mohamed said, “My year abroad with the YES program in West Virginia nourished my creative soul in all aspects. My deep involvement within the Bridgeport High School Theatre Department and Thespian Troupe 7549 jumpstarted my passion for acting and with it, my passion for writing. I find both passions of mine to be deeply interconnected, as my affinities for storytelling and vulnerability as a mediator between individuals that I learned as an actor are reflected in my writings.”

Take a look at Mohamed’s writing in his blog on Medium where he shares poems and even a pilot for a TV show!

On March 18, Sima Sweidat from Jordan and Wajdi Hemissi from Tunisia showcased their crafts in the "ALAM in the Arts" session on visual arts.

Wajdi’s passion for photography started when he was a YES student in Colorado. The first time he used a camera was during his exchange year. On the first day at his host school, the photography teacher chose Wajdi to join the class, even though he had no prior experience. The photography teacher taught Wajdi all the basics, and then encouraged him to take pictures at school. Wajdi’s teacher was impressed with his photos, and from there Wajdi discovered his new talent. After his YES year, Wajdi continued developing his photography skills with various projects with the American University in Beirut and fashion companies. During his presentation for ALAM in the Arts, Wajdi shared several of his favorite photos from his portfolio.

You can find Wajdi’s photography on his Instagram page here.

Sima started her own small business in jewelry called “Jalag.Jo”. “Each earring has a different story and showcases who you are,” Sima explained during ALAM in the Arts. Sima has enjoyed creating jewelry from a young age and draws inspiration from fashion, Pinterest boards, and other Instagram pages. Her creative process includes taking screenshots from movies and TV shows to analyze a character’s wardrobe and to see how she could recreate the look with the accessories that she makes. One of her more recent creations is an olive branch necklace that reflects one of Jordan’s most iconic trees.

To look at more of Sima’s jewelry, be sure to look at her Instagram page!

On March 23, Hafedh Luqman from Yemen and Selima Terras from Tunisia showcased their crafts in music.

Hafedh shared that his passion for music started out as a prank. “It was basically to get on a stage, and have something to say on the open mic,” he explained, “and then it just kind of got out of hand. I’m not a professional musician, but I try my best to use this hobby to express myself in this crazy life.” Hafedh shared performances of several of his songs during the "ALAM in the Arts" session.

Even though Hafedh didn’t spend much time focusing on music during his YES year, he explained, “I spent half of my YES program in Wisconsin, and the second half was in Michigan. I had a very interesting experience; it wasn’t static…To be honest, I think the YES program was the best thing that ever happened to me because it really unlocked my understanding of myself. It provided me a foundation to start building my character.”

Selima opened her portion of the Music event for "ALAM in the Arts" with an original song called “I’m 17”, which is about her struggle about what she wants to do in life. Afterward, Selima explained her creative process. “Basically, my idea is that I write songs in times of crisis. So, writing songs is kind of a coping mechanism. It started out with memorizing chemistry and then mini mid-life crises at the age of 17, and then so much writing during the pandemic. It’s basically a way for me to put things out and make fun of the situation. I think it’s a nice way to realize that it’s not that deep at the end of the day, and we’ll be ok.”

Selima also shared that her sister first introduced her to her love of music. Later, Selima studied music formally at her local conservatory, and now she plays in a music band called “Sforzando” with some of her peers. Selima noted one special music project that she did with her YES alumni community in Tunisia, called Tounes Alwen.

When discussing her time on the YES program, Selima explained, “I spent a year in the States, and I was in Bedford, NY. Luckily, I had a wonderful host family who had a piano…that experience was interesting because I always loved improvising, but it was then that I realized that I could make endless pieces just by what I enjoy.” Selima shared that sometimes after dinner she would play the piano and recreate a song that someone was humming in the background and incorporate Tunisian notes. For an exchange student talent show, Selima wrote her first song called “You’re So Cool”, which was about the struggles of being an exchange student.

To hear more of Selima’s music, visit her YouTube channel.