Alumni have been busy raising money to conduct several different types of community events. They set up booths to solicit funds at Mecca, Abdoun, and Arabella Malls, and have received donations from additional sources. As a result of their efforts, several charitable events were organized.

On Thursday, September 2nd, the YES Charity Meal 2010 event was held at Al Tazaj restaurant in Amman. During this event, Al Tazaj provided meals for 30 amazing children from a local orphanage outside of the capitol. Another event held was the YES School Bags 2010 campaign, which took place on September 8th. For the School Bags event, alumni canvassed the entire town of Ghor Al Mazra, going door-to-door to greet community members and to hand out school items. Ghor Al Mazra is one of the poorest communities in Jordan. Alumni distributed school bags and other supplies to over one hundred students to help them begin their academic year. 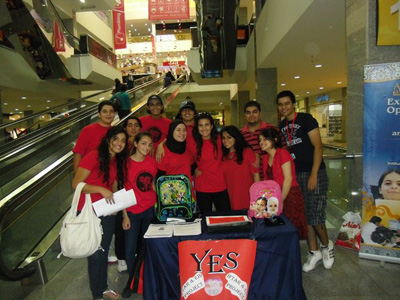 Next up was the YES Toys Drive 2010 event, where alumni distributed toys and gifts to children at Al Basheer and Al Jama'a hospitals. This was followed by the YES Childcare event, where alumni painted the nursery at Ain Jaloot Secondary School. The goal was to make the nursery more child friendly, which was successfully accomplished.