On Saturday October 10th the hall of SMA Negeri 2 school in Makassar, Indonesia was filled by about 70 students who attended the USA presentation that I held. They were so excited and enthusiastic for the presentation.  I was supported by other YES alumni and also: two current exchange students to Indonesia from Germany and Japan and an American native speaker from New Jersey!  Most of the audiences are the students in 1st grade which is one of our purposes in order to encourage and motivate them to be an exchange student.

The materials of the presentations consisted of general information about the USA: School life, people, stereotypes, traditions and Southern culture. I heard several stereotypes that were delivered by people in the audience. They were surprised that actually not all parts of the United States have a lot of skyscrapers and are developed with hi-technology like the images people have seen on television or other media. They got to know that the United States and Indonesia have the same national motto which is Bhinneka Tunggal Ika and E pluribus Unum. Both of them mean the same thing. That is, united in diversity.  I also delivered some positive values I got from my exchange experience in the US which I hope could encourage audiences to apply for the program as well. 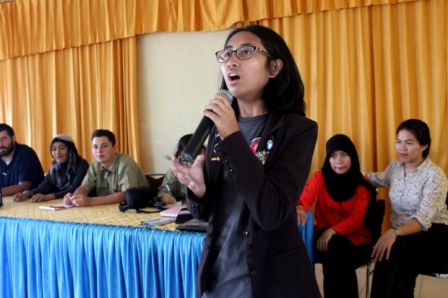 I was hosted in South Carolina and found that Uncle Sam’s country has many accents and different customs. It was such a pleasure to introduce my experience of US Southern culture!  A couple of the students volunteered and challenged to pronounce some of the English words in Southern accents and idioms. Overall, this session was the most fun one because they just learned and listened to the different pronunciations. Such as “ Did you like it?” sounds like “Jawlaikit” and “Something” sounds like “Sum’t ”.

In the end of the presentation, we threw some questions to the students and gave out US postcards to those who could correctly answer questions about US states. Delightfully, a lot of them raised their hands and were so eager to answer those questions. 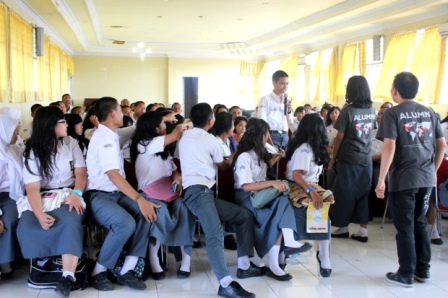 Last but not least, I feel so honored and excited to do more presentations in a creative way to contribute to building the bridge of mutual understanding for both countries.

Top Photo: Ika, YES alumni, exchange students from Japan, Germany and the US