The opportunity to get out of Sarajevo and see the rest of Bosnia and Herzegovina was a really exciting one for me. In fact, it was so exciting that I was willing to arrive at the train station by 6:30am in order to get tickets and seats. Yesterday, all five of we YES Abroad students in Bosnia and Herzgovina (Katie, Savannah, Emma, Helena and me, Anna) and Selma (our coordinator) traveled to Mostar by train. Mostar is the largest city in Herzegovina (about 100,000 people live there). It’s across the Dinaric Alps from Sarajevo, so on the train ride we passed over a lot of mountains and through a lot of tunnels. The leaves are still hanging on the trees, so there were a lot of gorgeous colors throughout the trip.

After about a two-and-a-half hour train ride, we arrived in Mostar. We walked to meet Luljeta and Sarah (the Regional Director for Southeastern Europe at American Councils) at a hotel and had coffee (or in my case, hot chocolate). Afterwards, we went into the Karadjoz-Beg Mosque and climbed the minaret for a stunning view of the city. We wandered towards the Old Town, and stopped behind a 16th century mosque for an optimal view of the Old Bridge.  We also climbed that minaret (even though it was a lot higher). We kept walking towards the bridge, but stopped in at a shop to watch the owner make designs on copper, and at a museum to learn about the bridge’s destruction during the war and reconstruction. I also met some tourists from Singapore and took their picture. 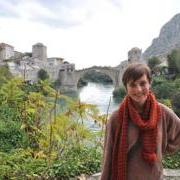 We eventually got to the bridge, which is what I had been wanting to see for a very long time. It was gorgeous. Also, when we got to it, a biker who was dressed like Oliver Twist leaned his bike against a wall, pulled an accordion off of his bike, and started to play a really beautiful, slow piece in a minor key. We walked across and walked down to the Neretva river to see it from another angle. Then we continued on our sight-seeing adventures and meandered towards the Crooked Bridge, which looks like the Old Bridge but is a lot smaller. It’s over a small, gushing stream that feeds into the larger river. It’s also quite beautiful, and there weren’t any other tourists around so we got the opportunity to take funny pictures together.

We then went and found lunch. Savannah and I split the “National Plate,” which had a sampling of different traditional foods. After lunch we were “set free” to wander around the Old Town, and a Canadian woman, Kiley, came and introduced herself to us. She had just graduated from college and was travelling the world - she’d already been to Kenya, Poland, Bratislava, Sarajevo, Vienna, and Budapest among other places. She was very friendly and fun to talk to, but also was hungry and so left in search of an affordable restaurant. Next we saw our friend Abedin, a YES program alumnus. It was pure coincidence: he also lives in Sarajevo, but happened to be visiting Mostar with his dad on the same day as us. We chatted for a little bit and then Savannah and I wandered off to explore some streets.

Before our train ride home in the evening, we went to the mall and…bought chocolate shakes at McDonald’s. Then we got on the train, nabbed a compartment before anyone else could, and I slept. When we got back around 9:30 pm, I walked with Emma and Helena to the trolley bus stop and then walked home from there.

I mentioned above that the Old Bridge was destroyed in the war. This is an important piece of history that is crucial for understanding the tensions that still exist today. Initially, Mostar was under attack from Serbs during the war in the ’90s and Muslims and Croats fought together to defend their city. However, the politics changed and the Croats began to attack the Muslims with help from Croatia. The Croats targeted the bridge in their attacks, and on  September 9th, 1993 it was shelled repeatedly. It had already sustained considerable damage and fell into the river. The bridge had stood for 429 years. It has since been rebuilt with assistance from UNESCO. As much of the original stone as possible was used in the reconstruction, and it was built in the same manner as it had been originally erected. Now, it once again spans the Neretva River.

Today, Mostar is a very divided town. Although about half of its people are Muslim and about half Croat, Croats live almost exclusively on the west side of the city. Since the war, they have erected a church tower so tall that it doesn’t have adequate support and is predicted to eventually fall. There is also an enormous cross on top of a mountain overlooking the city. Mostar has one of the “Two Schools Under One Roof,” a school in which the Bosniak and Croat kids are segregated, have a different curriculum, and actually learn a different history.
Much like the rest of my experience in Bosnia-Herzegovina, my trip to Mostar was an incredible visit to a beautiful place, but there was an underlying tension which was disturbing. It served as a reminder to how serious issues like nationalism and intolerance are today.