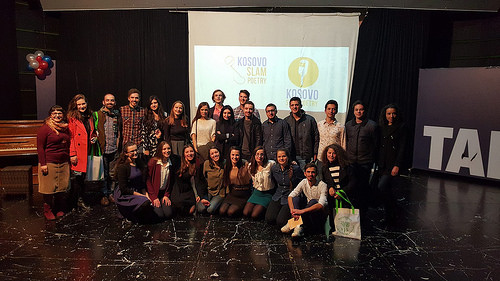 Kosovo, a country located in the south of the Balkan, has suffered from oppression for years. At first we were oppressed by war but although now there is no war happening, there is still oppression going on for certain groups: children's rights, women's rights, LGBT rights etc. YES Alumni in Kosovo knew other people's concerns on these matters so they decided to help them express those thoughts and problems.

After a lot of preparations, donations, hard work and excitement, on October 24th about 13 young people gathered together to recite their poems to the audience. These young people were full of life but they all had problems that were closely tied to the community. We heard poems about depression, and how the community affects people to go through such a phase. We heard poems about war and how it has still affected people in our country, even though we're not in war anymore. We heard about how it feels to be LGBT in a community that despises such people, just because they're different. We heard about how it feels to be closed in a box full of judgment, and not being able to get out.

Listening to those people made us realize that poetry and art in general is much more than we thought it is. Art connects people in a way that we had never imagined it would. Art lets you express feelings whether they're bad or good, in a fascinating way. We can destroy barriers through art.