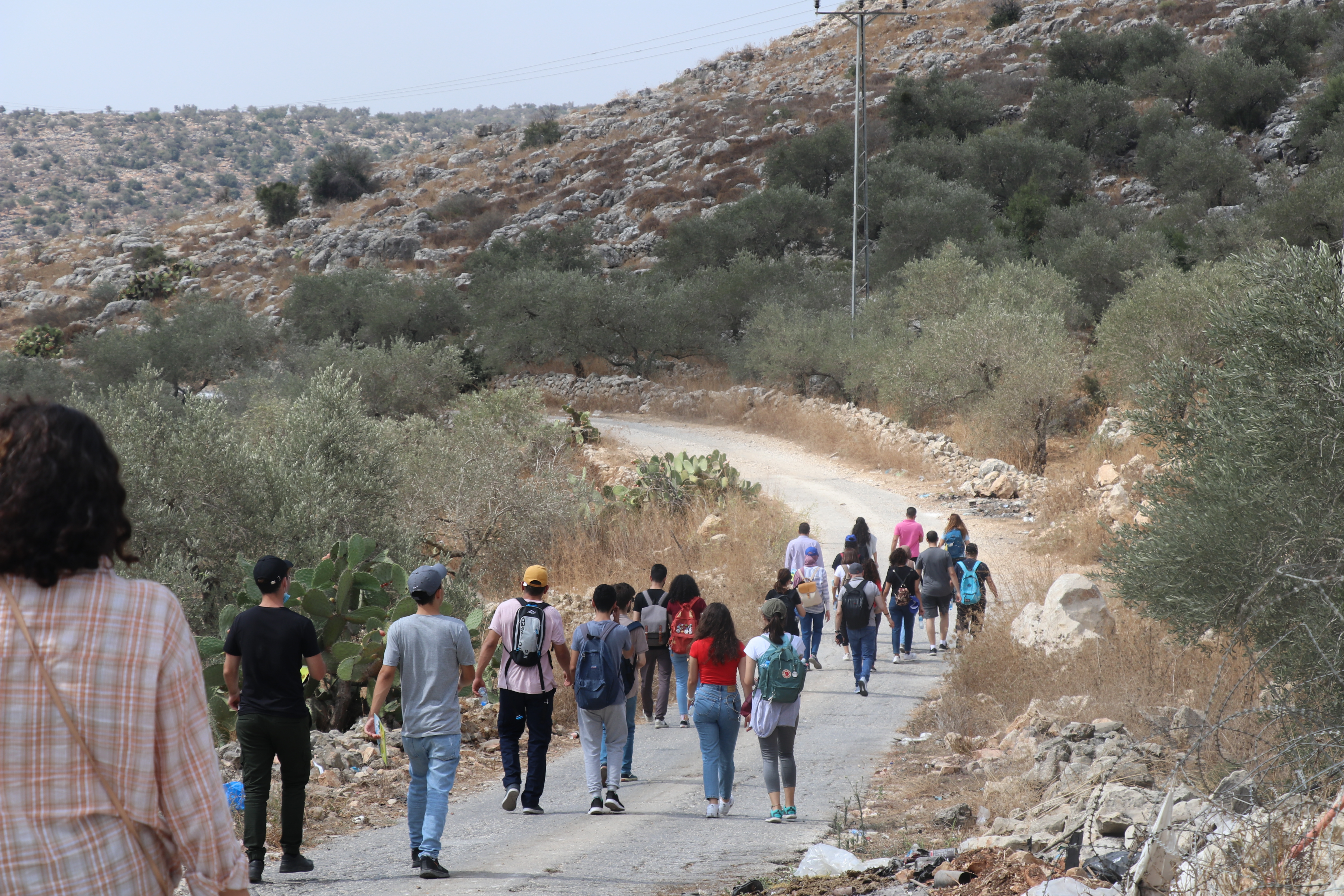 On September 10, 33 alumni of the YES and English Access Microscholarship (Access) Programs went on a hike to Aboud, a village located in the Ramallah and Al-Bireh Governorate. The U.S. Palestinian Affairs Unit and Amideast organized this excursion for the YES and Access alumni.

Aboud lies northwest of Ramallah and Jerusalem. It is also called the “City of Flowers.” The village has a beautiful mountain landscape filled with olive trees. In addition to its rich nature, Aboud is also rich in history. Aboud has several churches, monasteries, and mosques dating back to the Byzantine and Ottoman empires. 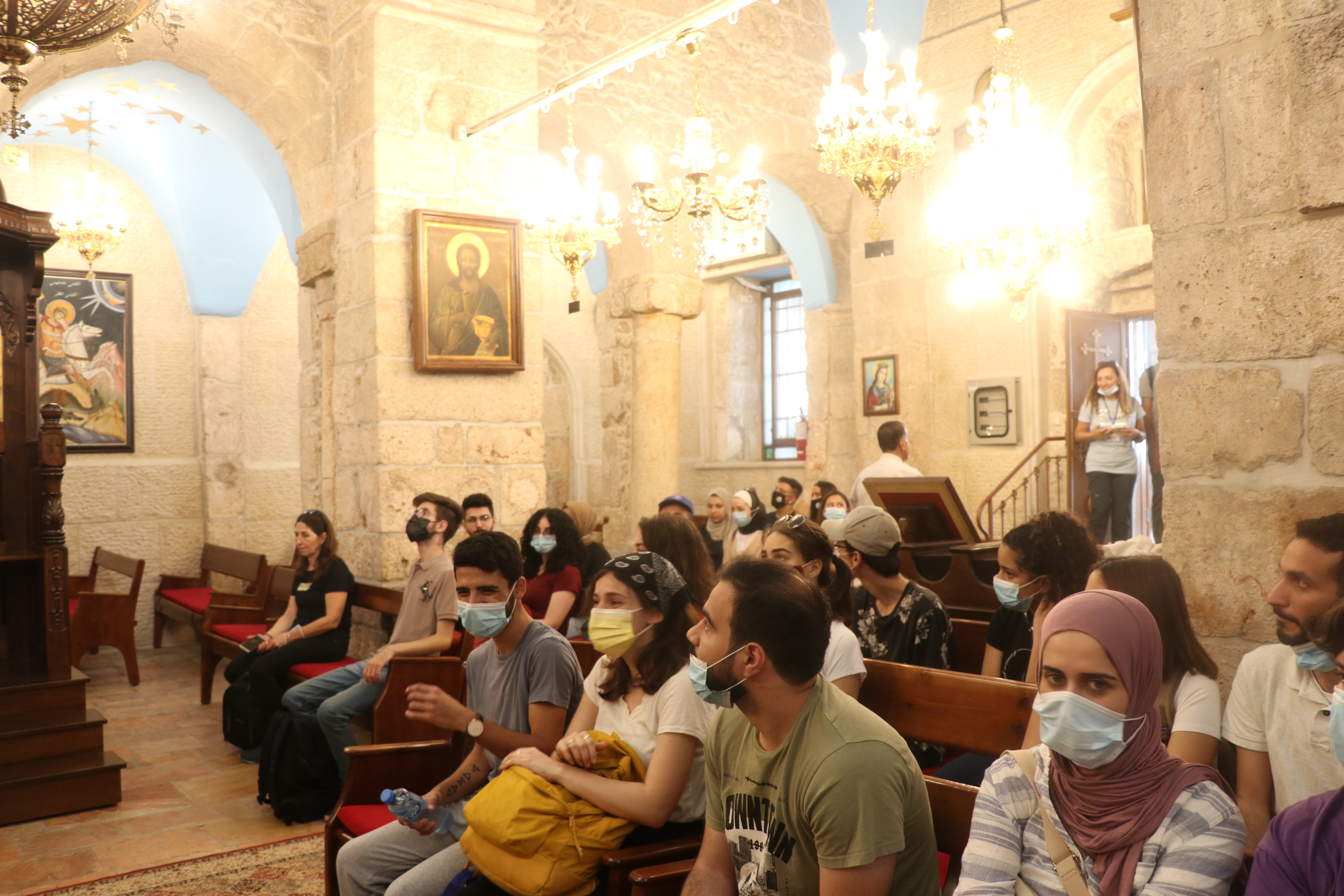 Early in the morning, the alumni met at the Amideast office in Ramallah and then left for Aboud together. Upon arrival, a local tourist guide introduced the alumni to Aboud’s history and most important sites. The alumni began their tour at the Church of the Dormition of Virgin Mary, also known as Al Aboudiya in local dialect. Then, the alumni ate a traditional breakfast arranged by local women from the village which included tea and a traditional dish called “manakeesh” which is comprised of freshly baked bread topped with olive oil and zaatar, a spice mixture. YES alumnus Omar Daghlas says, “The hike was very exciting! It felt amazing to do such activities with such amazing people after the quarantine we’ve been through. We learned a lot about the history and nature in Aboud. My favorite part was eating ‘manakeesh’ prepared by women from the village.” 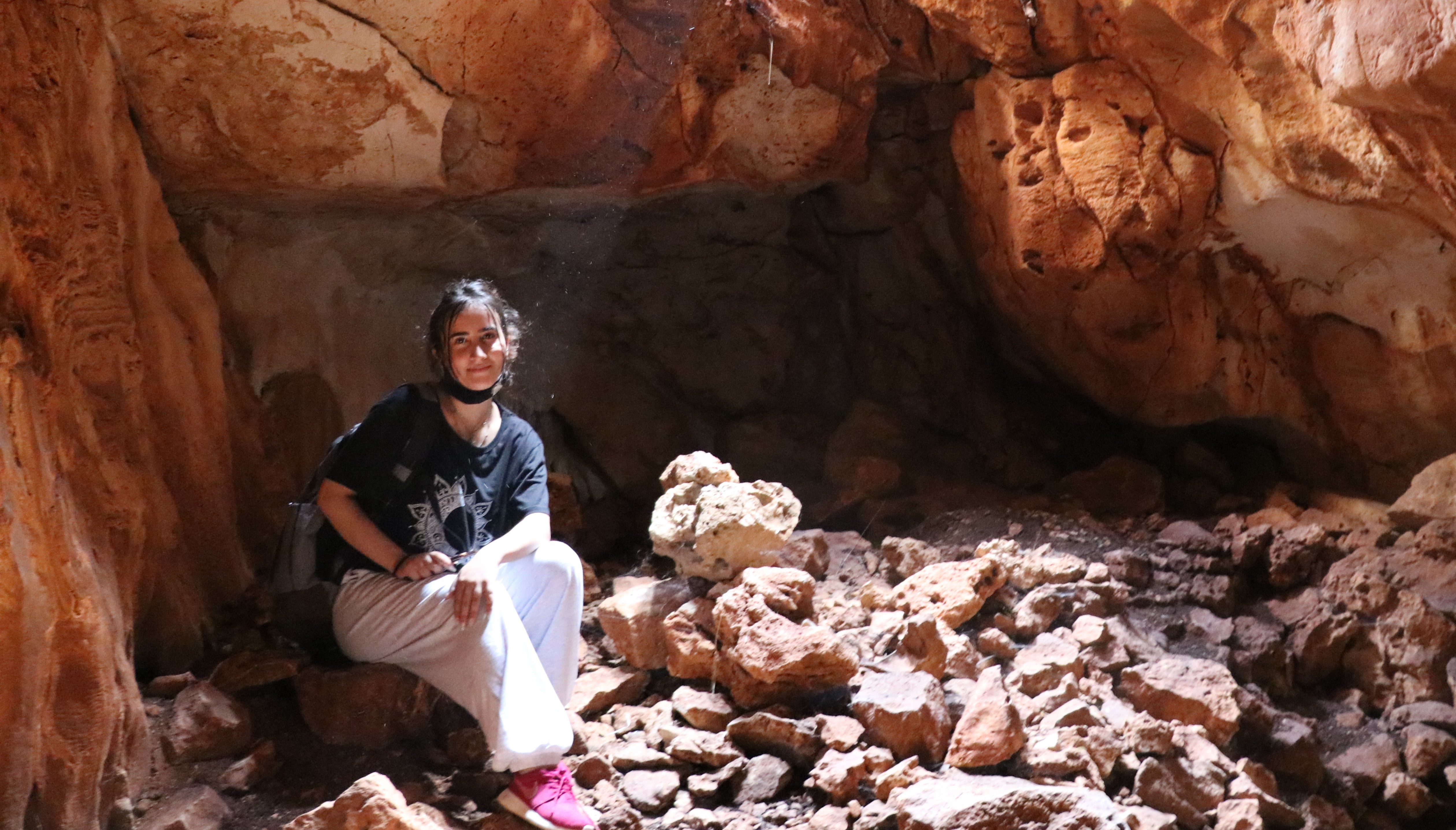 After breakfast, alumni hiked all the way up to a mountain cave. It was the first time many of the alumni ever visited a cave. Upon reaching the mountain peak, the view was refreshing and very suitable for a short break and taking pictures. The trail was filled with historical sites such as St. Barbara’s Grotto, a Roman burial site, and a rock quarry. The last stop was to the lemon valley, where most of Aboud’s water is collected. After the hike, the alumni took the bus to the Qatrawani Shrine. The alumni then had another traditional meal prepared by the village’s locals. At the end of the day, the alumni took a group picture and thanked the people of Aboud for their hospitality. 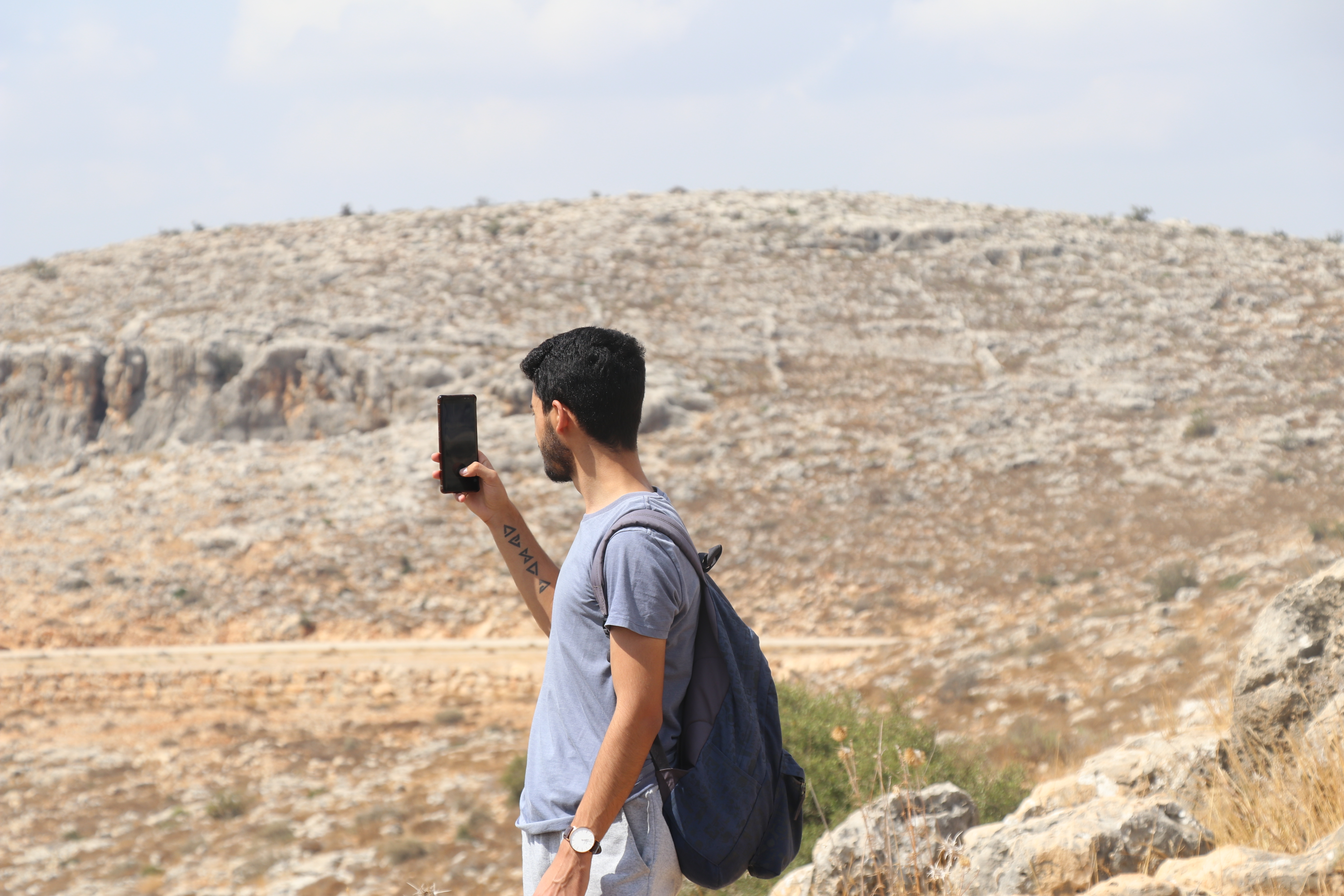 YES alumnus Omar Daqah says, “This is my first time visiting Aboud, and I didn’t think such a small village could hold that many historic and religious places. Hiking in the mountains of Aboud was refreshing and it was a nice educational experience to learn more about Palestine.” 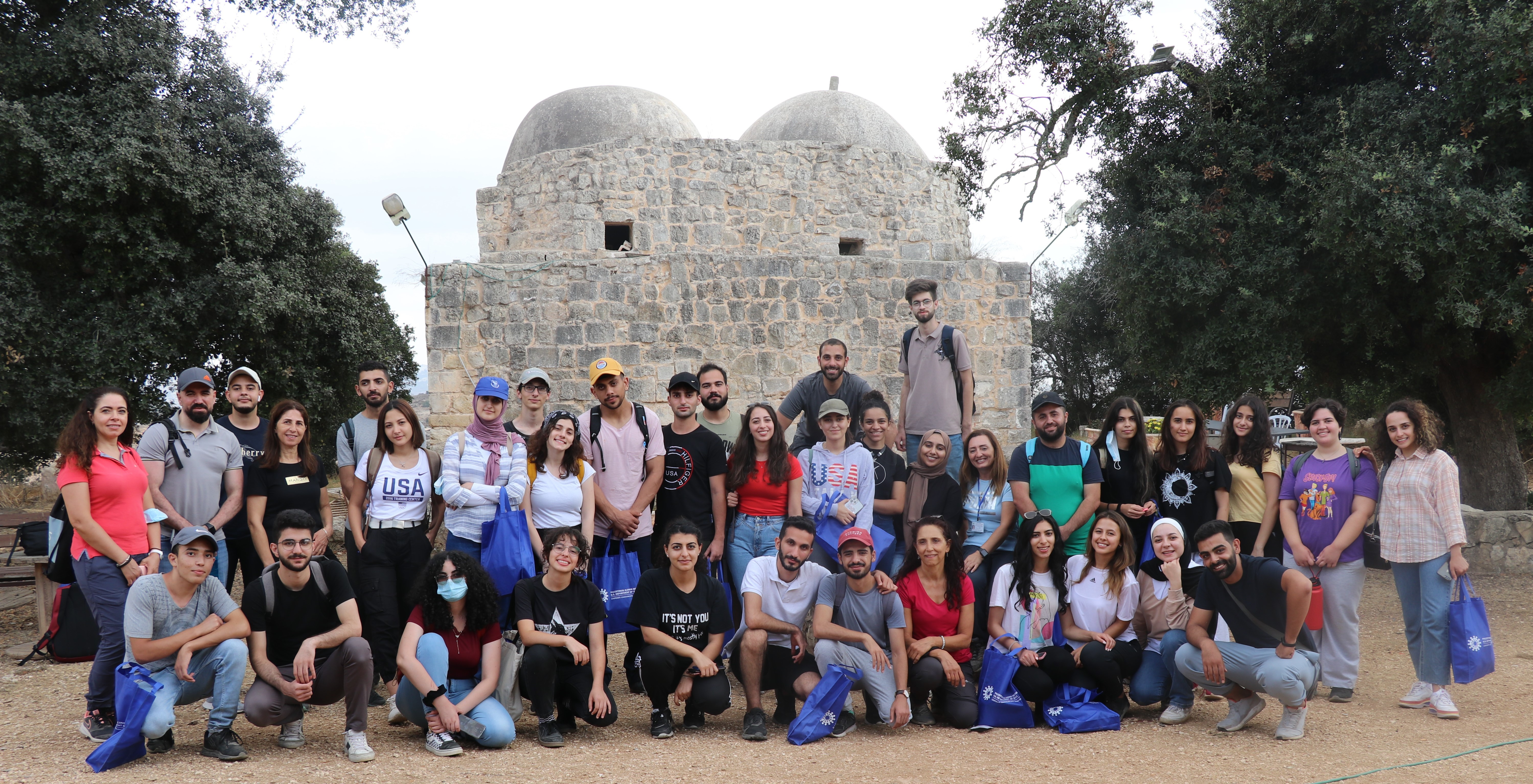