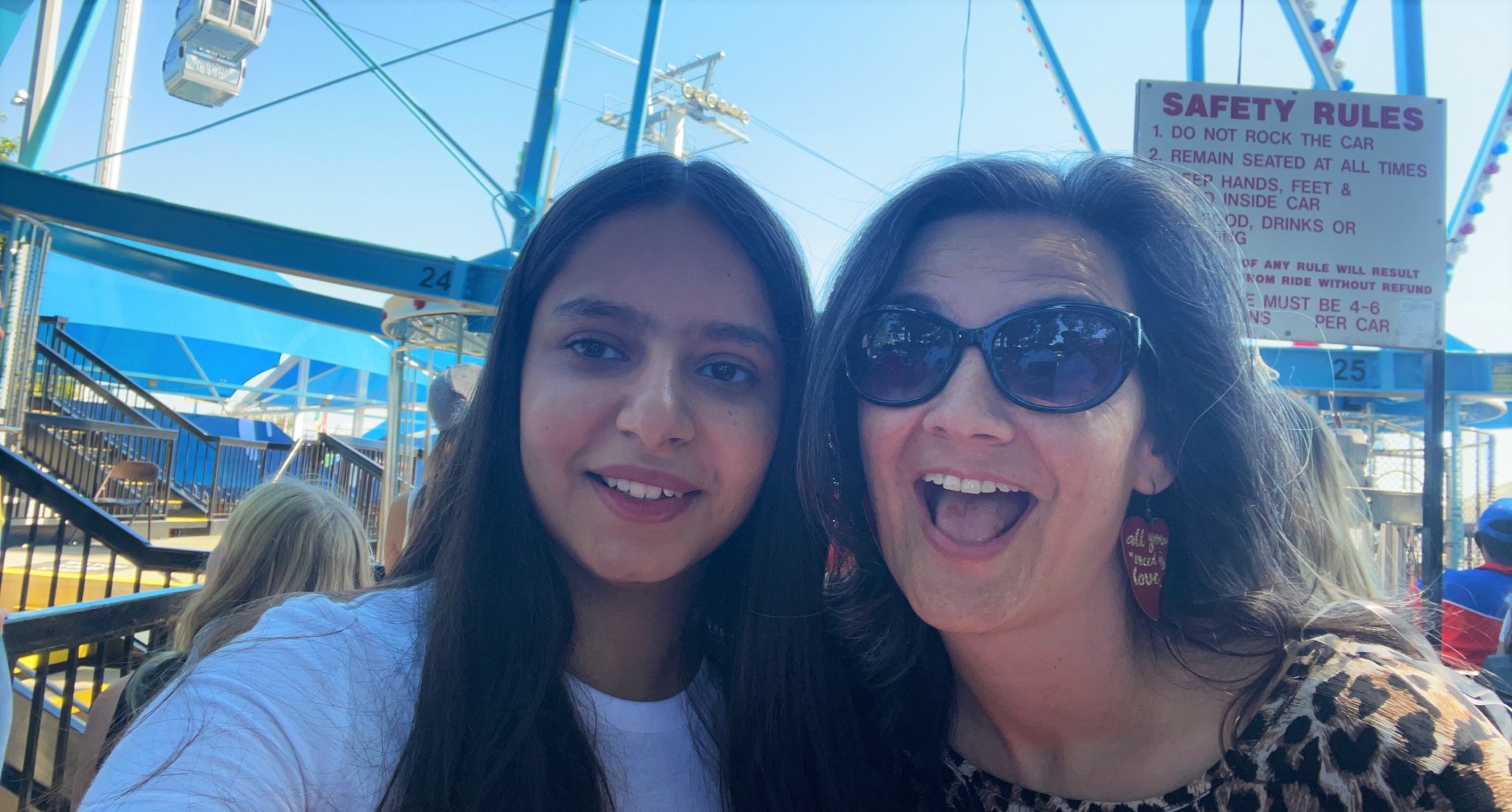 We are pleased to announce the December YES Student of the Month, Rumaisa Mughal, from Pakistan. Rumaisa is placed by CIEE and hosted in Hillsboro, Texas.

Rumaisa has already found many ways to serve her community. On her second day after arriving in the United States, Rumaisa helped assemble care packets for children in need. Since then, she has volunteered at a food distribution center, contributed to recycling efforts, worked a fund-raising concession stand, and served as a docent and gift-shop clerk at a paleontological museum.

Proud to share her culture, she overcame her fear of public speaking to give a presentation on Pakistan at the Hillsboro Rotary Club. She was featured in the local Hillsboro Reporter newspaper, interviewed by Waco’s CBS-TV affiliate, and received a certificate of achievement, presented by a member of the Texas House of Representatives. 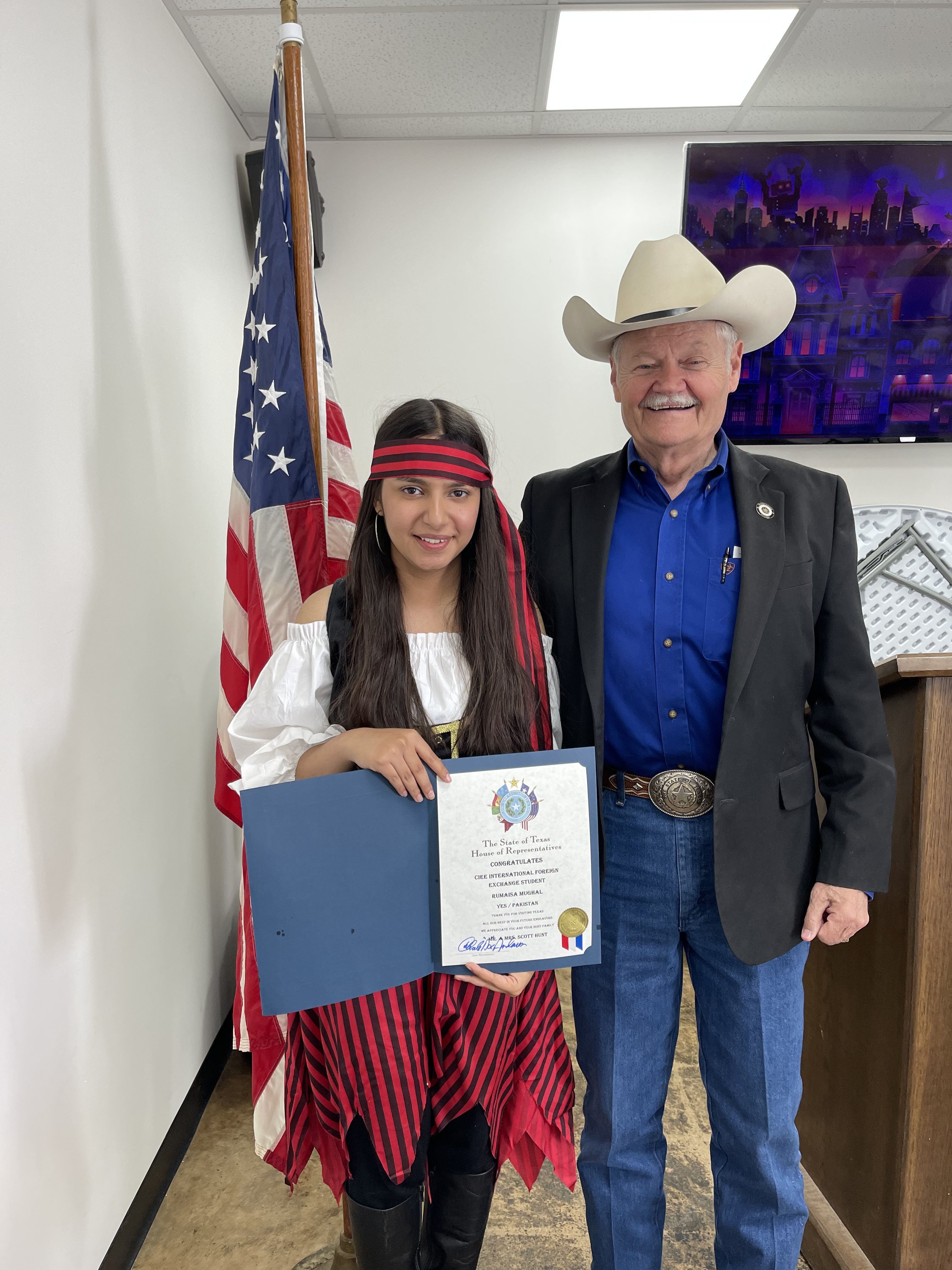 Rumaisa receiving a certificate of achievement.

During International Education Week, Rumaisa continued to build her self-confidence as she gave seven presentations about Pakistan to junior high school classes, cleared up misconceptions about her country, taught her audiences a traditional dance, and distributed “kheer,” a typical Pakistani dessert, to her classmates. She also gave a presentation at the Lions Club.

Rumaisa not only excels academically but stays active socially and has flourished in her role as yearbook editor. At home, thanks to piano lessons from her host father, she is learning a style of music she never knew existed. She also loves attending church with her host family. “I have met the nicest people there, including kids my age,” Rumaisa, a devout Muslim, says. “And church lets me see another side of American culture. I now understand that no matter our differences, we are basically the same. We all pray for world peace.”

Rumaisa’s willingness to step out of her comfort zone is impressive. Although heights make her queasy, she rode a colossal Ferris wheel at the State Fair of Texas and says she is now ready for a roller coaster. She visited her first haunted house in the days leading up to Halloween, not least because all proceeds went to charity. Next up on Rumaisa's conquer-her-fears to-do list is snow skiing. She plans to tackle the slopes of Utah in January — and said she feels “a little scared but also excited” about the trip.

When asked to reflect on the impact of her exchange experience, Rumaisa shared that when she first arrived, school was her main concern, but the experience of preparing care packages for underprivileged children at church on her second day after arrival had a big impact: “I had no idea how that one experience would change me. But it did. Two months later, I am telling you that giving back to my community is the part of this program that gives me the most joy. Some may see it as work, but I see it as a great opportunity to connect with others and become more immersed in American culture. I think all leaders should have a real soft place in their heart for the people they serve. And that is what community service has provided me. The more I give, the more I get back."