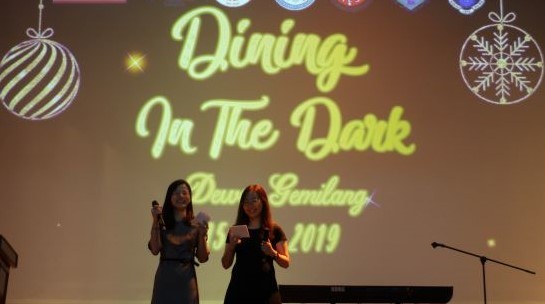 “Dining in the Dark” is the brainchild of the YES Alumni Malaysia Think Tank which took place earlier this year and aims to foster understanding and acceptance of the visually impaired community.
We had 30 or so participants dine in a near pitch black environment for them to experience losing their sight and having to rely heavily on other senses to finish their meal. There were also opportunities for them to learn how to use braille machines to make bookmarks, discover how the blind identify notes and coins, check out assistive technologies, watch videos, and find out what University of Malaya is doing to raise awareness on people with disabilities.

We would like to thank visually impaired #YESalumni, Ernest Teoh (YES '18), for contributing to the videos that were played as well as guest speakers Puan Noor Liana bt Ismail and Muhammad Faiz bin Zainuddin who shared their experiences teaching the visually impaired and being a visually impaired tertiary-level student respectively.

We'd finally like to say thank you to all participants and volunteers involved. We hope to continue playing a role in raising awareness for persons with disabilities in the future! Here one of the alumni participants shares his experience:

When talking about visual impairment, what is the first thing that comes to your mind? Someone who is fully blind and cannot see a thing? Someone who cannot fulfill his or her daily needs without assistance? Someone who is not as skillful or reliable compared to the general public? If these thoughts ever crossed your mind, then it is time to set things straight.

On the 15th of December 2019, I was able to attend Dining In The Dark event hosted by YES Alumni Malaysia in collaboration with Kolej Kediaman Raja Dr. Nazrin Shah of University of Malaya. Held at Dewan Gemilang, University Malaya, Dining In The Dark was an event organised with the aim of raising awareness on the visually impaired community. The event kick-started with attendees given time to move around the hall. There were a few booths present. The first booth that I went to was where YES alumni explained to us about devices and software created to aid visually impaired people, of which some I knew existed but had never bothered to check how they work. An example of these assistive technology is the pre-installed voice aid in iPhones which reads out loud whatever texts are on the screen. Another booth that I remembered going to was one where I got to learn how to write in Braille. 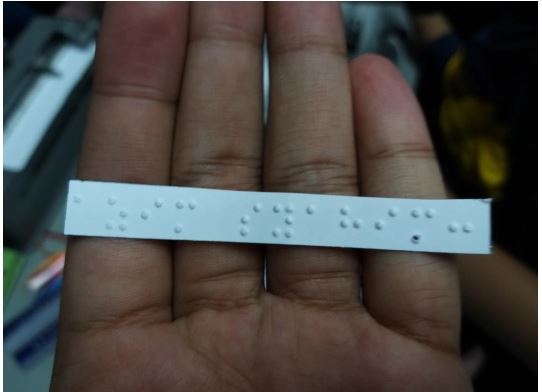 The event continued with food. It’s time for dinner! However, as the name of the event goes, we were going to be dining in the dark. Before the emcees let us go to the food tray, the lights were all switched off. To grasp how the visually impaired would experience their daily lives, we are expected to eat in the dark. No vision, we have to figure out what we wanted and how to eat using our other senses. A few YES alumni were present at the food tray to guide us on what food was available. It was dark but we were still able to see a bit so I remember getting confused over papaya and orange. They were both in the sane tray so they both looked the same.

While eating, we were accompanied by the dim electric candles on our table and entertained by a performance by our YES alumni Shaun Yeoh (YES ’18) and Umi Nabila (YES’ 17). They performed Christmas songs which I really enjoyed. Then, they premiered a video about Ernest Teoh, a YES ’18 alumnus who is visually impaired and how he does his daily activities. Also, he knows how to play the violin very well. Shaun and Ernest had recorded a heart-moving rendition of “You Raise Me Up” with Shaun putting a blindfold on while accompanying on the piano to understand how Ernest felt like being a blind musician. It was really beautiful and touching.

We also got to hear more from Ernest where in the video, he talked about himself, how his exchange journey went, about Braille and many other things. There was also one part where Ernest touched on visual impairments. Not everyone who is visually impaired is totally blind. Different people have different degrees of vision. And then one thing that stood out was that when Ernest said to not see people like him and pity them. Treat them like how we would treat any other person because they are as capable as us. “We don’t see things as they are, we see them as we are,” – Anais Nin. A quote that I will always remember. They are equal to us only if we see them as equal. 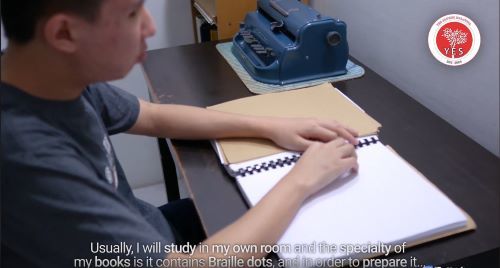 Through this event, I learned that disability does not make someone less of a person. Instead, it could very well be an ability. Thing is, that’s what we don’t see. We put low expectations on them. We pity them.  I hope things can change in our society, where the first step towards change is awareness and the second step is acceptance.