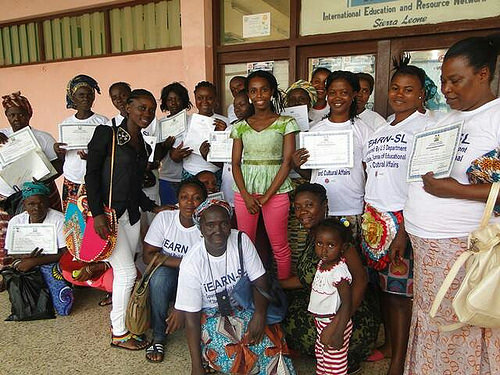 I am Isha Haja Bangura. I was a YES student from 2012-2013 and was hosted by the Guthery family in Springfield, Missouri, where I attended Glendale High School. The Kennedy-Lugar Youth Exchange and Study (YES) program is one that has changed my life for the better; I met different people from different parts of the world with different cultural backgrounds and lifestyles. I was empowered and was shown the importance of community service. The YES program showed me the real meaning of being a leader. Being a leader is not all about being successful, but helping others in their communities.

We all have different problems in our communities that need to be faced. The African-American writer James Baldwin wrote, ˝Not everything that has changed can be faced, but nothing can be changed until it is faced.” The YES program has enabled me to think about issues and problems in my beloved country Sierra Leone, face them, and find and implement solutions.

Sierra Leone, located on the west coast of Africa, is blessed with beaches full of golden sand, fertile soil, mountains, rivers, a natural harbor, and beautiful people who are very accommodating and full of laughter and hope. I’m proud of the fact that as a country, we believe in unity, freedom, and justice for all. However in my community, women's empowerment and children's education are being affected due to poverty. Women find it very difficult to engage themselves in activities that will sustain their well-being. Children lack essential school materials, which makes the education standard very poor; some are not even going to school because their parents can’t afford it. As the saying goes, ˝education is the key to successˮ and children are the future leaders; therefore, they deserve quality education.

The outbreak of the Ebola virus in Sierra Leone during 2014 and early 2015 made the problems in my community worse. The majority of the sick women also were responsible for providing their children with basic necessities, but unfortunately they weren’t able to do so because they contracted the disease. These women are now finding it very difficult to adapt back into society, because misinformation about the disease has caused people to fear and discriminate against Ebola survivors. As women are now the breadwinners of their households, they are also finding it difficult to earn enough money to provide food, education, and medical support for their families. This deadly disease has devastated my country’s economy and has left most survivors very poor. As a YES alumna, I thought that one way to tackle the issues of female empowerment and education for children was to provide livelihood support and business training for female survivors. Business training will enable the women to sustain themselves and their families, and also allow them to send their children back to school. 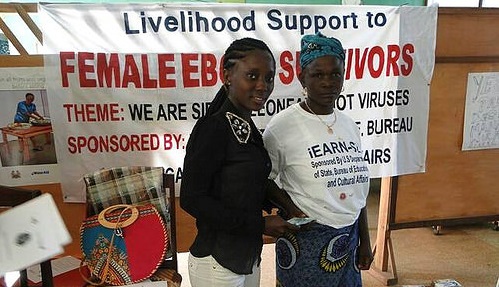 I wrote a grant proposal and received funding from the YES Alumni Grants Program.  My project ensured that 20 female survivors from different parts of the capitol, Freetown, would be provided with startup capital and business training to ensure their success in the informal economy.

I selected the participants with the help of my team members and local authorities from various communities. We went door-to-door to select the participants so that we would know who truly needed support. Twenty women were selected from the communities of Aberdeen, Gbendebu, Goderich, Rokupa, and Porty, communities located in the Eastern and Western parts of Freetown. My team and I went to these communities and interviewed the women with the help of the community councilors, local leaders who have the records of all the survivors in their areas. The women also provided their Ebola survivor certificates to show that they had the disease. During our house visits, we asked the women questions like: How did you contract the disease? Do you have children? If yes, how many? Do you have a husband? If no, are you the breadwinner of the house? What is your source of livelihood? We concluded that 90% of the women interviewed are the breadwinners of their households.

The training was held at the offices of iEARN Sierra Leone in early December 2015. The training included sessions on start-up strategies, profit making, and basic marketing principles. Mr. Milton Dumbuya, an entrepreneur and the finance manager at Source of Hope Sierra Leone, a microfinance organization, was the subject matter expert. Mr. Dumbuya graduated with a Bachelors of Science in Applied Accounting from the Institute of Public Administration and Management and holds certification in business and entrepreneurship. Source of Hope Sierra Leone is a government-registered, not-for-profit organization, established in 2013 with the aim of improving the lives of the economically active poor in society and building a better community for all. One way that Source of Hope addresses this goal is by providing business and microfinance training to women in both rural and urban areas of the country. The trainings focus on business and entrepreneurship, career development, marketing and sales strategies, and accounting literacy.

During the training, Mr. Dumbuya asked the women whether they had engaged in any sort of business before. We learned that before the Ebola outbreak most of the women had been engaged in small businesses, which are part of the informal economy. For example, many operated stands selling agricultural products, fish, spices, or even cooked meals. However, when they returned home from the health centers after recovering from Ebola, their businesses had fallen apart and the women could not revive them for various reasons, including lack of capital funds. 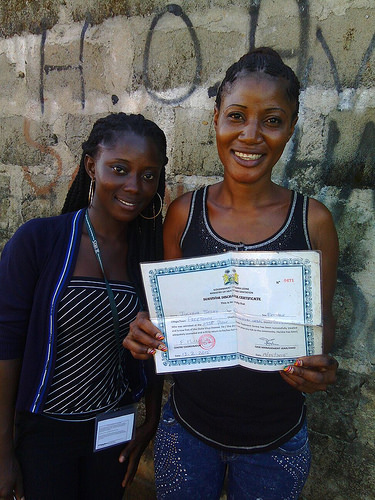 During the training, they revealed that they did know a good deal about business already and were ready to work towards being better businesswomen. The trainer worked with each of them to develop a plan to revamp or start a new business idea. Most of this consulting was done through discussion, as many of the women had not received an education and are not literate. At the end of the training each participant received a small amount of capital to begin their startup business. Their business ideas included selling fish, rice, palm oil, and spices. Some businesses, such as kiosks for cold drinks, involve refrigeration, which can be a challenge. Some women will make clothes and sell them, while others have cottage industries of cooking foods, such as sauces, and selling them as take away foods.

These women felt lucky and blessed to have such an opportunity out of thousands of survivors. The eldest of them, Iye Kargbo, said, “Thanks for showing us love. Most people in our communities discriminate against us because we are survivors and they think we might infect them, but this love you have shown us today has given us life and rekindled our hopes for the future. You gave us a sense of belonging. We will take this business support seriously.”

Fatmata Bangali, a participant whose husband died from the disease, shed tears, saying: “I’m now the breadwinner of the house as my husband is no more. One of the most essential things that I need right now is a business that I can engage myself in to support my family and me. I had a business but I lost everything when I was taken to the health centre due to the disease that I contracted, but I was left with absolutely nothing when my daughter and I were cured. Thank you for giving us hopes again. I assure you this grant will change our lives for the better.”

I am sure that the training had a positive impact, as these women proved to be very hardworking and were ready for a positive change. The team and I have a monthly monitoring plan to observe and track the progress of their businesses and how their standard of living is improving. It has really been a pleasure to work with these women, and I have also developed my leadership skills. My team is full of inspiring people who care about the lives of people around them. The project was challenging, but in the process of implementing it, I learned that when one has a dream, he/she must work relentlessly to bring it to reality. People who might have failed in fulfilling their dreams will always tell you that you can’t do it; however, all you have to do as leader is to believe in what you stand for. Thanks to YES for transforming me into a leader, one that seeks a positive change. A big thank you to the U.S. Department of State Bureau of Educational and Cultural Affairs for funding my project and making it come true. And lastly, thank you to my team members: Ms. Jane Peters, Mrs. Massah Mary Kanu, and Mr. Umarr Kamara from iEARN; YES alumnus Amadu G. Kabia (YES ’11); Alpha Kamara and Sophie, and our expert trainer Mr. Milton Dumbuya. 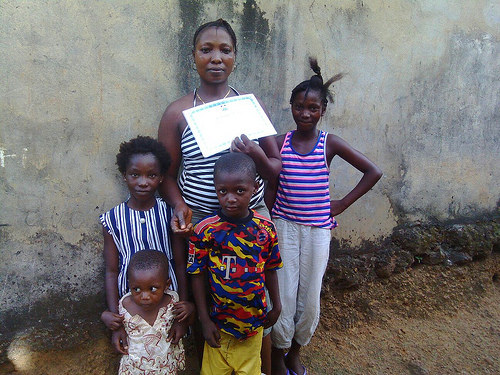