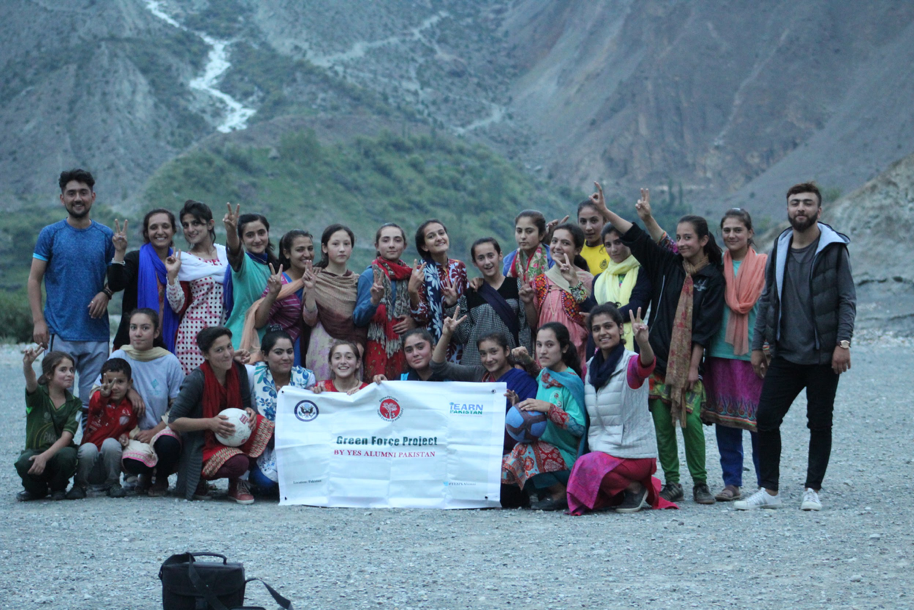 We are Shehnaz and Zainab, two athletes from Hunza, Pakistan. We are highly enthusiastic about sports and we believe that everyone regardless of his/her gender should have the right to follow the passion for sports. There is no doubt in saying that we are very lucky to be part of a region where education is given a top priority and people enjoy the freedom of living their dreams without any fear of being judged. However, the people haven’t been yet able to use that freedom in sports. It is because they don’t have any opportunities available to practice their athletic potentials. Therefore, this summer we organized sports camps in Lower Hunza. With the help of YES program, we organized football and volleyball sports camp for girls in four different villages of Lower Hunza. The aim of this camp was to provide a platform for girls to practice and embrace their athletic skills. Apart from giving the opportunity for girls to excel in sports, we also focussed on helping them to positively utilize their teenage energy.

As being athletes ourselves and the opportunities we saw for girls in sports during our exchange year is U.S., inspired us to carry out this initiative. We saw that in U.S., girls have a lot of opportunities to participate in sports. There are organized sports in school as well as in the community. Alas! That's not the case in Pakistan, and Hunza being at the edge of Pakistan doesn't has these privileges. So we decided to organize a sports camp followed by a mini tournament. This was done to encourage girls to participate in sports. We also formed football and volleyball clubs in Lower Hunza, the first of their kind. 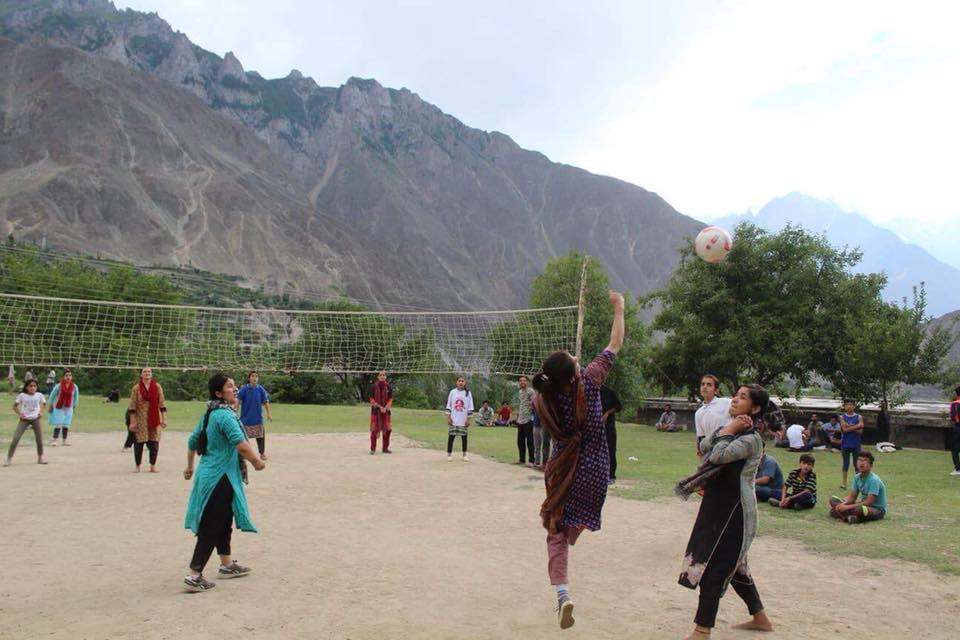 As we are both athletes - Shehnaz being in the school’s volleyball team and Zainab in the National Alpine Ski team, we realized a worldly known fact; the gender inequality in sports. So we decided to work on it. We know that our little project is not going to have a huge impact on eliminating gender inequality in sports, but as being female athletes we believe that we have a responsibility towards promoting sports. In Lower Hunza, the literacy rate is 100% but girls don’t have the opportunity to play sports. As being student athletes, we believe that a healthy mind should have a healthy body. Therefore, we decided to initiate sports camps in Lower Hunza, so girls can focus on sports while going to school. We are not going to see the full impact now but in a couple of years, if the camps happen every year then there will be a sports boom in Lower Hunza.

Although, each moment we have spent in the camp is memorable. However, the best part was the turnout of the girls. So many girls showed up for the camp. But apart from that almost whoever we met in the villages, they all told us that we have introduced Naya (new, a political term used by the new ruling party of Pakistan) Pakistan. That was the most fun. Even adult and old ladies came up to us and asked whether they could participate or not. But sadly, our camp was only for 14-18 year olds. The community response was splendid. A lot of the guys who played in the regional/club teams offered to volunteer as a coach at the camp.

Lower Hunza doesn’t has any sports clubs for girls. So our initiative was first of the kind. Girls learnt and enjoyed a lot. Some of the girls had never played any sports, but their enthusiasm and spirit of learning surprised us. Our aim wasn’t just to introduce sports for girls, but also to help in their confidence building. We also aimed to teach them the concept of positive body image. 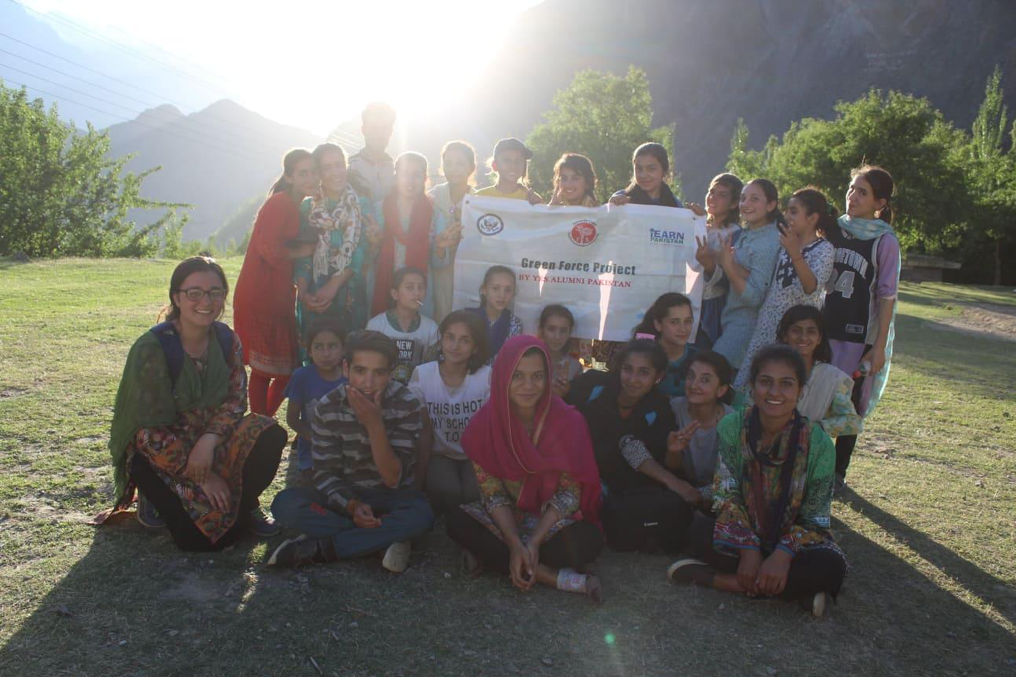 This camp was definitely a rewarding experience for the girls who had participated. It acts like a root upon which they will build their interest in sports. After participating in this camp, they would realize about the potentials they have and a little bit of practice everyday can enhance it further. This platform will motivate the girls to consider sports as an integral component in life to stay mentally and physically strong. As being YES alumni, we feel the need of serving our community through grassroots projects and while doing that we are not just creating opportunities for the people but also inspiring and reminding them to continue the legacy of community work generations over generations. A person knowing that some other member of his community has helped him achieving his passions, would do the same act of kindness to others and that way communities grow and head in better directions.

We believe that every girl should know about her rights and build the strength to defy the barriers like gender inequality, which diminishes the spark of dreaming big in life. This camp had helped the girls to boost their self-confidence and develop leaderships skills, with which they would not just outshine individually but also lead the entire community to reach the sky.

As much as this camp has benefited the village girls in many ways, it also has a huge impact on us. It was truly a worthwhile and eye-opening experience to work with the young and enthusiastic girls. The authorities of all villages showed unconditional love and support for our project. Around 30 girls had participated in each village and many senior citizens showed up on the tournament day to cheer the young girls and to celebrate their  success in sports that they never had. Seeing all the girls supporting and uplifting each other through the camp, made us believe the truth of Hunza being the most literate region of the country. 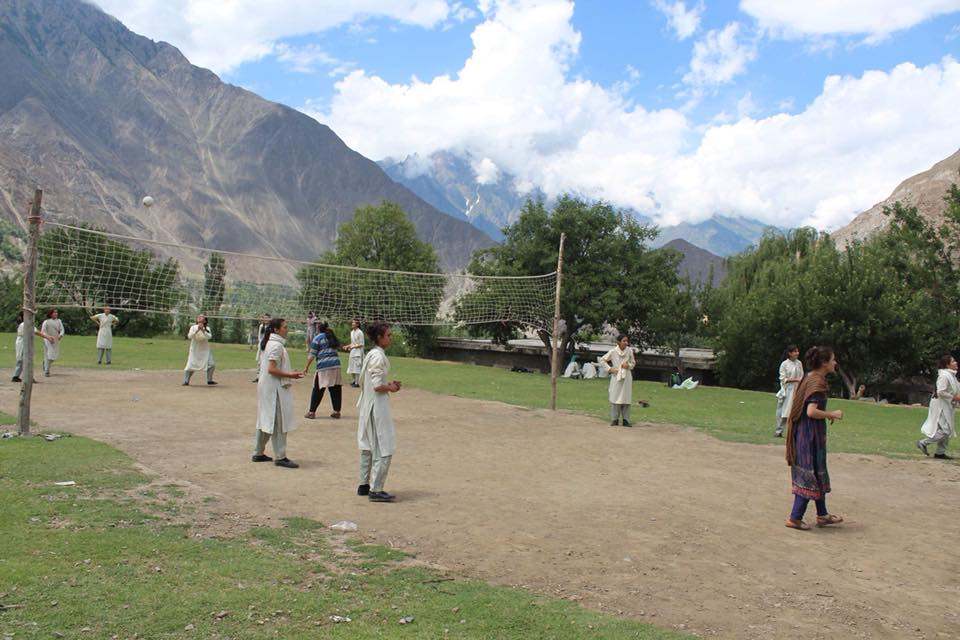 As the organizers and mentors of this event, as much as we have taught the girls different values and important lessons, we also have learnt from them. Every girl we came across, has motivated us to keep doing the good work. The interest and willingness they have shown to make our goal successful, inspires us everyday to create such opportunities again in the future.

This camp has an impact not only on girls in terms of embracing sportswomanship and developing various skills, rather it also has changed the community as a whole. Working together against one cause through this project has increased the sense of community and further united people of lower Hunza. They are ready to collaborate more with each other in order to fight back the  problems that exist in their society.

The reason behind doing such camps is to have the satisfaction for playing our part to overcome major issues like gender inequality. We want girls to avail equal opportunities in every aspect of life. No matter how little impact this small project would have on the community right away, we did our part of struggle and when everyone does their part, the collective impact would be big.

We are very proud on the success of our camp and we hope to continue organizing such events again in future. Because we believe in constant struggle for the betterment of our community. With the knowledge and skills we own, we will keep putting our efforts to eliminate gender inequality in sports.