Davor Tunjic, a YES Student from Bosnia and Herzevgovina who is hosted in Bakersfield, CA, wrote to us with his experience sharing about his country during International Education Week this fall.

"My role during International Education Week is to present my country the best as I can. Presenting Bosnia and Herzegovina is one of my two major goals as a YES student, the other is to learn about American culture and lifestyle. For the International Education Week kickoff, I made two boards. One was about Bosnia and Herzegovina and it contained a lot of pictures, interesting facts about my country and Bosnian crochet crafts called 'heklanje'. The other board was to show American what life in my country looks like and had a lot of examples from my own life. I included pictures of my family, my friends and the city where I live.

I had my own table with a black tablecloth so the big white Bosnian crochet could stand out and it drew people’s attention. I showed Bosnian souvenirs and artifacts like traditional sugar boxes, baskets, socks, hats, coffee cups and a Bosnian flute. I had also a tourist book about the city where I live, and a doll with traditional female Bosnian clothing. A balloon globe helped me to show people where Bosnia and Herzegovina is located and how far away it is from California. I tested the georgraphical knowledge of visotrs to my table by asking them to find my country on the globe. 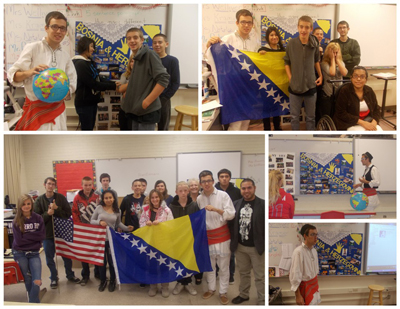 I spent the night before in the kitchen making huramsice and burek, Bosnian traditional dishes. Hurmasice are wet cookies and burek is meat pie. Everybody liked it even though I’m not a great cook. They were fascinated by the wet cookies, because they never tried something like that before. I also had the chance to be on stage, where I performed a famous Bosnian poem written by Ivo Andric to show American people what Bosnian language sounds like. People enjoyed the presentation and the food that I made.

After the Kickoff I kept on doing presentations, most of them were in my school. I started with five presentations in my classes, but I ended up doing 20 presentations in 20 different classes. The teachers gave me the whole period to talk about Bosnia and Herzegovina. I had my two boards, a power point presentation, media files such as songs and videos and souvenirs that I brought to America. I was talking about Bosnian history, tourism, sports, traditions, religions, industry, language, government - every presentation was different! And people that heard it more than once didn't get bored. In some classes I played traditional Bosnian music called Sevdalinka and Bosnian pop music. In the other classes we danced the traditional dance called kolo and I wrote down their names in Bosnian Cyrillic script.

I had special presentations for the World History classes, where I focused on Bosnian history. I told them the story that happened in the capital city Sarajevo in which a guy started World War One by walking out of a Sandwich bar. I made also three presentations with Special Education students. They were excited to hear about a different country and to be able to ask questions about Bosnia and Herzegovina. At the end we took pictures with the Bosnian and the American flag. 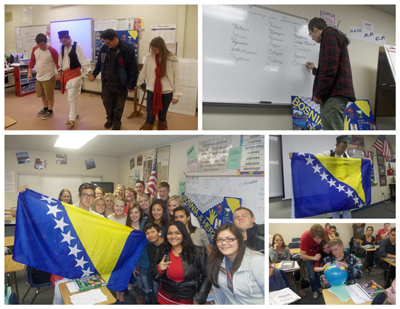 I was wearing my traditional clothes in school and everybody wanted to take pictures with me. I felt like a celebrity. I tried my best to make my schoolmates remember Bosnia and Herzegovina and I got really good feedback. My teachers supported me also by putting questions in tests about the capital city or the national symbol of Bosnia and Herzegovina.

I’m glad that my placement organization, World Link gave me the opportunity to present my country to the American people and I’m sure that people will remember my presentations about Bosnia and Herzegovina, even after I leave."