The Individual Impact of Volunteering on YES

YES participants are known for doing pretty impactful volunteer work while they are on program, and YES alumni are known for working together to improve their home communities. But how does the community service component of the program impact individual YES alums?

For one alumnus, Sherif ElSherif, being on the YES program has inspired him to continue giving back to his community, no matter where he is.

While he was living in Missouri as a YES student from 2013 - 2014, Sherif volunteered at his high school’s technology help desk and says he “spent pretty much all his free time there.” When he found himself with a bit more free time, Sherif gave cultural presentations to elementary school children, and he even served as a mascot for the school’s football team!

Working at the technology help desk was especially impactful for Sherif. According to Sherif:
“Working in the help desk isn't the most romantic idea of volunteer work, but it did teach me first about what it's like to work in such an environment and also pressured me - in a good way - to expand my arsenal of computer whiz tricks, since I had to come up with creative ways to fix people's weird computer problems. I suppose most importantly it made me happier at the time, since it was an opportunity to help humans, tinker with computers, and talk to people - three of my favorite things in the world.”

Now that he has completed the YES program, Sherif is studying…Computer Science! He is in his first year at the American University in Cairo, and in the long term Sherif sees himself, as part of a team working on something critical in the field - “today it's artificial intelligence and the cloud, tomorrow something even bigger!”

Alongside his career plans, Sherif makes plans to help those around him. Now that he’s in Cairo, Sherif volunteers through a city-wide student organization called ISLC. The section that Sherif works with, ISLC Cares, “makes contact with charities and sponsors in Egypt, looking for opportunities to do various kinds of good.” As Sherif describes it, “If charities were kingdoms, ISLC Cares would be the mercenaries.” 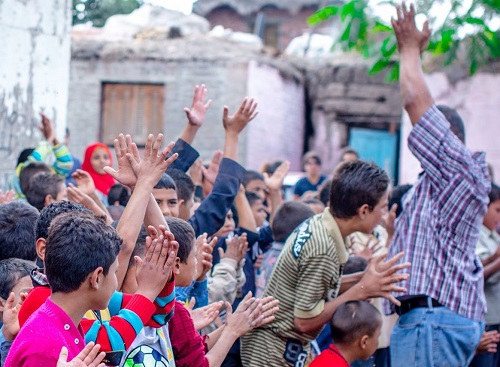 Through ISLC Cares, Sherif recently went to a village to provide hygiene and education seminars to underserved children. The trip was part of a joint effort between ISLC Cares and the Egyptian-Palestinian Friendship Association, as the village “was home to Palestinian refugees from the 1948 war, and is currently still home to their descendants.” Sherif said this village is “the kind of village where most kids don’t go to school, some get married at the age of 15, and most grow up to become sustenance farmers or trash collectors.” Even something as simple as a hygiene lesson could help improve their lives.

Although Sherif doesn’t have any specific plans for volunteering in the future, he continues to help wherever he can. Sherif has clearly taken the goals of the YES program to heart, as he makes community service an important part of his life, whether he is in the U.S., Qatar, Egypt, or anywhere else!