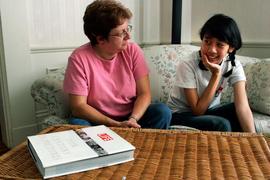 This article was originally published in the Hamilton Journal-News, Hamilton, OH
by Eric Robinette, Staff Writer
MIDDLETOWN — Annissa Izzati couldn’t have timed it better.
The 17-year-old Indonesian girl came to Monroe last month to start a yearlong stay as an exchange student at Monroe High School. Little did she know of an event called Middfest that celebrates a foreign country every year — and this year’s country just happens to be Indonesia.
Now that she knows about Middfest, scheduled for Oct. 2-4 on and around Donham Plaza, Izzati, who goes by the name “Icha,” promotes it to anyone she can.
“Will you be there? You should,” she has been telling other students.
Izzati is staying at the home of Monroe City Councilwoman Suzi Rubin. Rubin had served as a host for Middfest guests last year when some Mongolian girls stayed at her house. Having Izzati there this year was a happy accident.
Earlier this year, Rubin received an e-mail from the Youth Exchange and Study program, a state department initiative to bring students from Muslim countries here. After she agreed to host an exchange student, she found out that Middfest would be featuring Indonesia this year.
“She’s just been a delight to have here,” Rubin said of her house guest.
In addition to having no idea about Middfest, “I never thought I wanted to be an exchange student,” Izzati said. “This is my parents’ dream, so I said, ‘OK, let’s give it a shot.’ So here I am.”
For Middfest, she will be telling guests about what it is like to grow up in Indonesia and working in the crafts and activity area, showing people how to play Indonesian games.
“It’s crazy. I meet a lot of people at school who have no clue about my country. The whole thing will be an amazing experience for people,” she said.
And it will be a time of discovery for Izzati, too. This is not only her first trip to America but her first trip abroad. When asked what she wanted to see while she was here, she replied, “Snow.”
“She’ll get over that really fast,” Rubin said.
Copyright © 2009 Hamilton Journal-News, Hamilton, Ohio, USA. All rights reserved.
Share: