From Lebanon to Alaska

I came all the way from Lebanon to the United States, left my family, friends, and relatives to learn more about another part of the world. I wanted to put a limit to all my doubts and to all the stereotypes in my country about the United States. I’ve been in Anchorage, Alaska nearly 3 months. This is my first trip outside of Lebanon.

It's not easy to get into another culture –it takes time. I’m in a big, diverse school and am not recognized as an exchange student from Lebanon. Understanding American teens and how to interact with them is a learning process. I have had to introduce myself and take the first step to build acquaintances and friends.

Participating in International Education Week gave me a lot of exposure to students in my high school and to people in Anchorage. I spoke to elementary, middle school, and high school students. I was interviewed on a radio station and spoke to a small group of professional adults. I spoke in front of the Anchorage School Board. I spoke to groups of over 300 people and then to a small group of people who either lived in or travelled to Lebanon. I was asked a wide range of questions ranging from questions on the military, corruption, and government to how to write the numbers to 10 and how to write unicorn in Arabic. 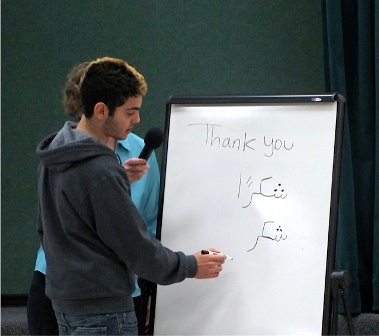 I was asked about my favorite foods in Lebanon and the United States. It was interesting to me to hear the types of questions asked. Even though there were some questions about Syria and the war of 2006, there were more questions about food, entertainment, religion, and sports. I taught people how to dance the Lebanese dance known as the dabke, showed them how to write in Arabic and how to speak some Arabic phrases. I played some Lebanese music and shared some of our traditional dishes to taste. I taught 3rd graders how to make baklava and told them a Lebanese folk story. I learned that people are fascinated with how the Arabic language is written and love our food.

Now many people in my school and community know who I am and have a better understanding of the Lebanese culture. The presentations helped people get rid of some of the stereotypes they had about Lebanon. I am also more comfortable speaking to people and will be able to speak to more groups here and at home. I’ve now been asked to provide additional presentations about Islam and Lebanon to a church youth group and to a Scouts troop.

I’m glad that I participated in the challenge of giving multiple presentations during IEW. It has helped me grow more self-confident and has given me a new appreciation for my own country.