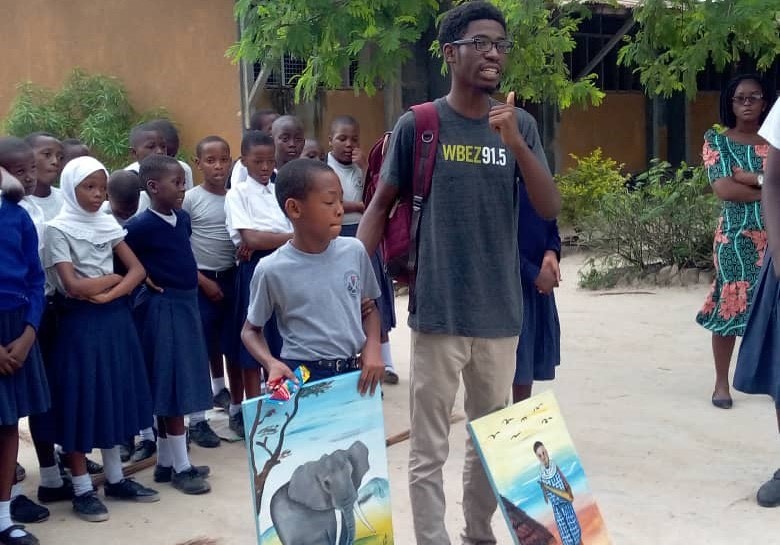 From October 10th through the 16th in Dar es Salaam, James Chungu (YES 2012-2013, hosted by IRIS in Grundy Center, IA) and his father and close friend organized an environment-themed drawing contest at Mlimani primary school. The goal of this project was to deepen the children’s appreciation for both art and nature. Chungu, who is an experienced graphic artist, was inspired by his father’s artwork as a child which led him to use his enthusiasm of animation and graphic design in his own project.

This project, called Mazingira Yetu Drawing Contest, allowed school children to draw and participate in a contest around the themes of environment. Chungu says that climate change and a changing environment is one of the Dar es Salaam’s greatest contemporary challenges. Because of issues such as waste disposal, limited land resources, depleted marine resources, and exposure to natural disasters, Chungu asked each participant to work on their own interpretation of environmental change in their artwork for the competition.

“Interactive, practical, and visual contests like this give the opportunity to go beyond the patterns of instruction, imitation, and repetition,” Chungu said. “The aim of this project was to inspire children to create their own, original work and thoughts on environmental issues.”

Over 70 children from 3rd to 6th grade at the Mlimani primary school participated in this contest and three students were awarded a painting, color kit, 6 pencils, a sharpener and an eraser. Some students were also awarded cash prizes for the art they created and even after the contest ended, kids continued to send fun artwork to Chungu. The contest overall received a great response from the kids who had a fun time taking part in the contest and the school thought it was a great idea as well.

Chungu is looking forward to working on another drawing contest in the future. He hopes to work with more schools in the future and is even planning on hosting an online version of this contest.