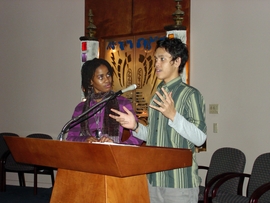 This article was originally published in the Bowie Blade-News

By JODY AXINN Special to the Blade-News and DAVID EMANUEL, Editor
Published 12/03/09
On the night before Thanksgiving, a unique service at Temple Solel showed the importance of the blessings around the world.
The Bowie Clergy Association invited Jewish, Protestant, Muslim, and Unitarian houses of worship to gather together to pray using liturgical material from even more faiths.
“Coming to America,” the theme of the Faith Communities of the Greater Bowie Area’s 15th annual Thanksgiving interfaith prayer session, resonated perfectly with the AFS/YES high school exchange students who joined in the leadership of the event.
The AFS/YES program’s mission, to promote peace through personal interaction and presentations about their religions and countries, blended well with the interfaith prayer session at Temple Solel, featuring Jewish, Muslim, Methodist, Presbyterian, Episcopal, Lutheran and Unitarian houses of worship.
Mundhir Mohamed, a Kenyan AFS/YES exchange student, and Imam Kareem Abdus-Salaam of the Islamic Society of Southern Prince George’s County, chanted the adhan, the Muslim call to prayer, to start the Thanksgiving interfaith prayer session.
One of Mozambique’s first AFS/YES students, Marcia Jose, read from Christian Scripture’s James 2:14-18 about joining faith and works, and another prayer for strength and peace, while Indra Mardiansyah, AFS/YES from Indonesia, read Al-Ma’un, The Small Kindness, in Arabic from the Qu’ran.
Later in the session, the students described their stories of coming to America. Indra came to the United States because he “wants good relations with other religions, and between Indonesians and Americans.” He explained that, “When I go back to my country, I will make presentations about America to Indonesians so that both countries will have a good understanding about each other.”
Mundhir stated, “Since 9/11 many Americans think every Muslim is a terrorist. It’s not so. In every religion, there are bad people. Peace is what Muslims need and want. We can’t stay in a world without peace and humanity.”
The clergy appreciated how the students will bring the values of the AFS/YES program home to their countries.
Abdus-Salaam said, “If more youth were brought here to see the real America, it would dispel the myths and set a positive way of thinking as adults. The AFS/YES program is great in that it utilizes real Muslim youth to spread the word that Islam is about peace; not about all the people you see in the news who are not practicing Islam correctly.”
Said Rabbi Steve Weisman of Temple Solel, “The students added refreshing honesty and energy to this interfaith service that us old clergy can’t always summon on our own. Their message of inclusion is exactly what we need.”
The Rev. Cynthia Snavely at Goodloe Memorial Unitarian Universalist Congregation agreed, saying, “The exchange students provide a wonderful perspective that allows us to see ourselves in a different light.”
And, concluded the Rev. Lawrence Harris Jr. of St. Barnabas’ Episcopal Church, “It takes a lot of courage to do what they did tonight and they did it really well.”
And the week before, Temple Solel invited AFS/YES Muslim high school exchange students to share with the temple’s Jewish classes about their lives as Muslim teenagers. The theme was “A Day in the Life of a Muslim,” and exchange students Indra and Mundhir, who spoke at the Thanksgiving service along with Nate Natasia, 17, from Indonesia, shared the importance of the five formal prayers said each day, each one according to the movement of the sun.
They discussed the wudu (cleaning and washing before prayer) and the clothing worn when praying – girls cover all body parts except face and palms when praying, boys, from navel to knee.
And, said the students, they do homework, play games and watch television, just like Americans.
“And I really like the music here, like Panic at the Disco and Backstreet Boys and Fall Out Boy,” said Nate.
But it’s the month of fasting that’s toughest to undertake here in the states.
Said Indra, "When I am in the school cafeteria, seeing the hamburger to my left and the french fries to my right, I think, oh no. And someone asks me, ‘would you like my hamburger,’ which is very nice, but I have to say no thank you. It’s hard to do. …
And, here in the U.S., “it’s harder to make prayer time, and it feels very different to fast alone, but the host families do make special time,” said Mundhir.
“It’s good to learn about different cultures,” said Andrew Skidmore, 14. “Stuff like this doesn’t come around all the time and it’s good to see other people and see how they live and what their lifestyle is. It’s just fascinating. Their prayers are really structured, for example. Just meeting these students means a lot to me.”
The Youth Exchange and Study (YES) program, created in 2003, in association with AFS Intercultural Programs USA, advances mutual understanding between the United States and countries with significant Muslim populations by bringing students, ages 15 to 17, to the United States to study at a high school and live with an American host family for up to one academic year. Exchange participants attend classes in an American high school.
Copyright © 2009 The Bowie Blade-News and Capital Gazette Communications, Inc.
Share: