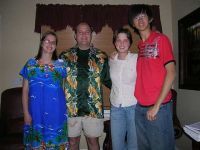 This article was originally published in The Star Malaysia
One solid sojourn
HEARING-impaired Kuala Lumpur native Liew Tim Choy never dreamed he would ever get the chance to experience life in another country. But last week he swung by Studio V, 1 Utama Shopping Complex, Petaling Jaya, to talk about his experiences in Colorado, the United States.
Tim, 19, was on a six-month AFS Intercultural exchange programme under the Youth Exchange and Study Program (YES) scholarship.
AFS is a school-based programme that offers inter-cultural exchange for students, professionals and volunteers to learn about a foreign country through their stay with a local family.
‘’I attended the local Colorado Springs High School for Deaf and Blind, and stayed with a ’hearing’ family, who had limited knowledge in sign language,’’ explained Tim, gesticulating excitedly as he began the interview.
‘’At first it was a bit difficult for me to communicate with them and my schoolmates; they speak American Sign Language (ASL) so there was some miscommunication and I tried to improve my limited speaking ability in English,’’ recalled Tim, who has limited speaking ability.
At school, it took him around four months to be able to fully understand his schoolmates and communicate well with them.
‘’On my first day it was so hard, the culture there is so different — people were talking all the time, and they sign so fast, it was hard for me to catch up,’’ said Tim, who quickly made friends among the hearing-impaired students.
Once he settled in, Tim began taking up as many activities as he could, including camping, sports, playing golf and the piano.
Learning how to play the piano was tough but Tim was so excited that he worked hard and learned the basics in four months.
‘’My piano teacher, Julie, had been teaching hearing-impaired students for some time. We learn by way of vibrations, and memorising the keys on the keyboard,’’ said Tim. ‘’I had to memorise which keys go with which sound. I memorised the music notes and even though sometimes I didn’t understand, bit by bit, I improved.’’
Since he returned from the United States, Tim hasn’t had anyone to help him out, but regularly surfs the Internet for sites that can help him with his piano playing.
He misses his friends and family in Colorado, but upon returning to Malaysia, he has discovered a new-found motivation to broaden his horizons.
AFS National Director Atty Sulaiman, who was present at the interview, explained that the programme sends at least two students with disabilities a year for the experience.
‘’We started sending them in 2004, the first batch was one hearing-impaired student and one visually-impaired student,’’ said Atty, who added that this was to give everyone interested a fair chance to take part in the programme.
‘’We send them to cities or towns which are fully equipped with the proper facilities needed to support students like Tim, who, in addition to adapting to new surroundings, must also get used to being independent despite their disabilities,’’ said Atty.
There are times when some of these students are placed in families that have little or no knowledge of sign language, but Atty assures there is always an AFS volunteer/support group nearby to help the student out.
’’Many students find that in the United States, families are less controlling but they also expect them to be independent.
‘’This really helps the students build confidence. Another good thing about sending students with disabilities is they get a broader idea of what they can do, and challenge themselves to become more than they thought they could,’’ said Atty.
Photo: Tim and host family.
Copyright © 1995-2009 Star Publications (Malaysia)
Share: