Playing for Peace in Ghana 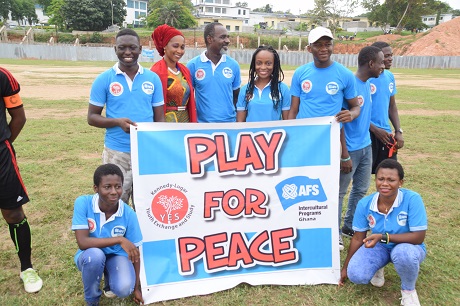 The YES Peace Games took place at the sports complex of the University Of Cape Coast. The Games marked one of the major events the YES alumni in Ghana seek to use as a tool to educate youth on the importance of peace and stability in nation-building and their role as peace-builders before and after Ghana's national elections.

Spearheaded by the president of the Ghana YES Alumni, Nasir Adu Ahmed, the event hosted eight schools who competed in soccer, basketball and the tug of peace. The games kicked off with Mr. Kwame Otchere, National Director of AFS Ghana, who remarked to the group that the peace games were a creative way to engage the youth on a sensitive societal issue whilst having fun and practicing ways to be peaceful even during competitions.

Nasir emphasized that the youth are assets for peace in the society. He stated that the peace games are a way of engaging youth to show their willingness to be responsible for ensuring an atmosphere of peace in their communities. He urged the students not to underestimate their importance in this regard.

Also present at the Games were representatives of various national political parties. They advised the youth to look beyond partisan politics and embrace elections as a democratic right to choose leaders who will engender national development. 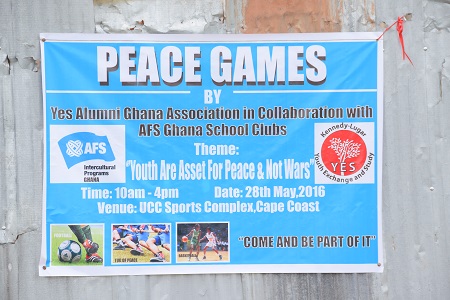 Wesley Girls High School in their speech mentioned that “the time has come for the youth to realize that peace-keeping is not the sole responsibility of the military." This theme ran through all the other speeches with the other participating schools calling on their colleagues to use education as a tool for youth ambassadors to spread the gospel of peace.

As for the games, there were three major competitions: soccer, basketball and tug of peace. The tug of peace, named after the famous sport "tug of war," was used to signify the existence of peace even when parties are at opposite sides. The game was won by Adisadel High School.

The event was mainly facilitated by YES Alumni Ghana Association members as well as club patrons. The YES alumni volunteered in many areas including keeping score, keeping time, and acting as referees

The games were fun, educational and above all, engaged not only the students but the community. The constant reminder of the need for peace is even more pertinent this election due to our previous political turmoil. It was also very useful to the students who became more aware that peace is not just a national policy but a joint responsibility that starts with them.

The YES Alumni are very grateful to the YES program, AFS, the patrons of the AFS Clubs, the participating schools, and all those who worked behind the scenes to make the whole program a huge success.