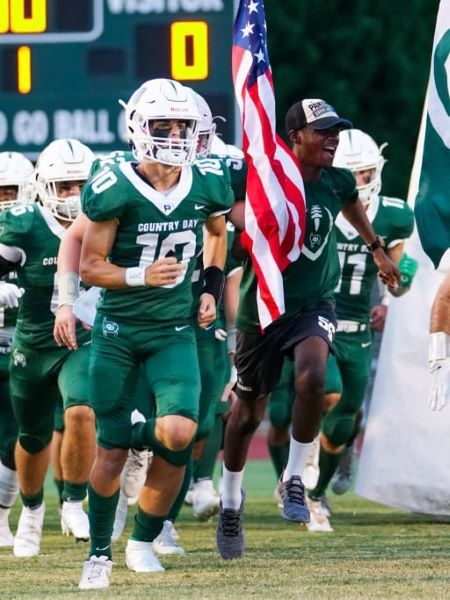 This was originally published on the Charlotte Country Day School website.

A week ago, on the eve of the 20th anniversary of 9/11, a special moment occurred among a group of teenage boys born several years after 2001. Here is the backstory behind the above photo and the beaming smile on the face of senior Emmanuel Omari, who goes by Omari.

Omari joined the Country Day community this year as part of the Kennedy-Lugar Youth Exchange and Study Program (YES). The YES program was established by Congress in 2002 in response to the events of September 11, 2001. High school students from countries with significant Muslim populations live and study for an academic year in the United States.

Omari joined the Country Day community this year, and since day one he has made an impact in the Upper School with both his intellect (he moved from 11th to 12th grade his first week) and his enthusiasm for school life. He wanted to be part of the varsity football team, so Coach Drew Witman found a spot for Omari as team manager.

In the team meeting before the September 10 game, Coach Witman told the players how the team would honor September 11 before the game by running out of the stadium with an American flag. “Omari raised his hand in the meeting, not to ask a question but to volunteer to carry the flag,” explained Coach Witman. “As I went on with my pre-game speech, I remembered the conversation that Omari and I had the first time I met him just a month ago.

“I spoke to Max Dawson, the player who was going to run with the flag, and I told him about Omari’s story. He went right to Omari and invited him to hold the flag alongside him as they entered the stadium and ran through the banner.”