American icon and deaf-blind author-advocate Helen Keller once wrote, “All the world is full of suffering. It is also full of overcoming.”  In that spirit—while a February sun shone brightly outside—Saint Paul area AFS exchange students on the Kennedy-Lugar YES, FLEX, and CB programs were engaged in an experiential activity designed to raise awareness of people with disabilities. The students donned sleep masks and sat themselves in a semi-circle on a dark and totally empty stage for a performance of local actress and author Leslye Orr’s “Hand in Hand.”

Totally blind in one eye herself and with acute tunnel vision in the other, Orr wrote her one-act play, "Hand in Hand" to celebrate the life “overcomings” of Helen Keller.  Unlike most plays, Orr’s work is meant to be experienced with eyes closed:  the action would be “seen” with the ears, the hands, and the heart.

During the performance students were riveted by Orr’s myriad changeable voices and sound effects.  Fingers, ears, and noses (but not eyes) scrutinized the flowers, articles of clothing, and Braille books that Orr deftly handed to them while recounting Keller’s life story.  At one point spice bread is quietly toasted offstage as a scent of cinnamon surreptitiously begins to float through the air. 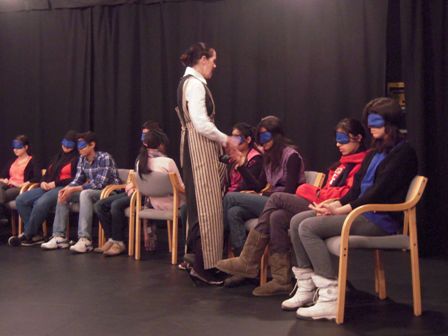 This year our area is hosting Jane Soh, a student from Malaysia who is deaf.  Orr, who has also written a children’s book about disabilities, adroitly adapted her play so that Jane Soh could also experience “blindness.”  During a facilitated discussion afterwards, Jane Soh excitedly told the other students about recently becoming friends with an American classmate who, like Keller, is both deaf and blind.

Waseem from Pakistan was moved to write the following in his on-line blog:  "Have you ever thought ‘What is it like to be different?’ .... Different in a way that's apparently not Normal or Good.  I am sure not many of you have thought about it or would have any idea what it is like to be different ....Well, I used to think the same way ....until today."  Aruba from Pakistan followed up with a message to the actress:  "Hey Leslye, thanks a lot for the wonderful and epic show you presented for us. It had such a deep sensation and message in it ‘to take every disability as an opportunity.’ Please come to Pakistan, where you will always be welcome."

If you're interested in bringing "Hand in Hand" to your area, visit Dreamland Arts