Teaching and Learning Together 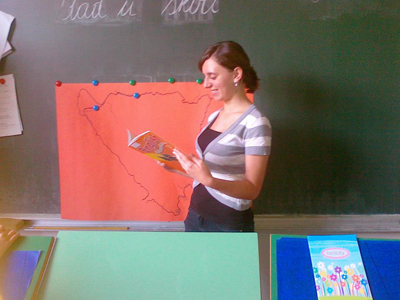 Dzenana Brkic, a YES Program alumna from Bosnia and Herzegovina, decided that offering free English language tutoring in her school, the Center for the Blind and Visually Impaired  in Sarajevo, would be a great community-based activity and an excellent way to assist her fellow schoolmates. Ms. Brkic spent the 2011/2012 school year at the Indiana School for the Blind and Visually Impaired while living with an American host family in Indianapolis.  Here, Dzenana shares her inspirational words regarding tutoring her classmates in Sarajevo.

"Upon my return to Bosnia after a year spent in Indianapolis as a Kennedy-Lugar Youth Exchange and Study scholarship recipient, I knew that some community service was in order. Since I still had a few exams to finish at my high school in Sarajevo, I decided to start my very own English Club. First, I asked for permission from my high school principal and luckily he was very supportive and enthusiastic about my idea. I then spoke to the English teacher at the school too and she said that she will check with the students from the middle and high school levels and see if any of them are willing to participate. After a few days, she gave me a list of kids that would like to get extra tutoring in English. Unfortunately, there weren’t a lot of kids that were eager to spend their free time in an extra class, but I was still very excited to begin teaching especially considering that teaching is something that I’ve always wanted to do.

My first class was made up of three students from the middle school level and ten from high school. I divided them into three groups, meaning that there were three English lessons per week. I have to admit that I can already tell that I have three awesome groups of students. I especially enjoy working with the younger ones. They, in particular, are so eager to learn, sing and read in English. My observation so far has been that there are some students at the high school level that are slightly reluctant to speak in English, but I am doing my best to encourage them and I can already tell that some progress has been made.

What I do in the classes with the younger students, for example, is to take some lessons that they do in their regular English classes and have them read the texts they get there out loud and translate them. We’ve also sung some songs they learned in class as well. I am also very glad that I have their English book in Braille (a special writing system used by the blind and the visually impaired) so that I can follow them while they read and correct them where correction is needed. 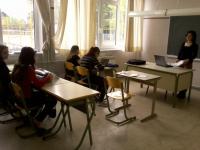 When it comes to the high school students, on the first day of our class I asked them what they wanted to learn the most. They told me that they would like to learn more English grammar, to translate some songs from English to Bosnian and to learn more vocabulary. Speaking practice was also one of the things on their list, so I had a student that knows English rather well translate what I was saying into English.

Lesson plans and materials for my classes are kept safely stored away on my computer in my dorm.  The lesson plans cover various topics such as sports, food, holidays, music and so forth. During classes we often listen to various audio files in English, when necessary we pause to write unknown words and discuss them afterwards. Another typical activity we do in the class is translate songs from English into Bosnian such as “Every Breath You Take” by Sting.  My students were thrilled to translate this particular song because we sang it last year in our choir group at our school. In our English class we sang Sting’s hit song, translated it and had so much fun!

What I plan to do more of with all of my students is to improve their vocabulary so that they can communicate better in English. I always tell my students that I am aware of the fact that when you are a beginner, it is really difficult to talk; at least it was for me when I first started learning English. But, once you've started to speak English, the language becomes easier with every conversation you make.”