The Ability in DisAbility 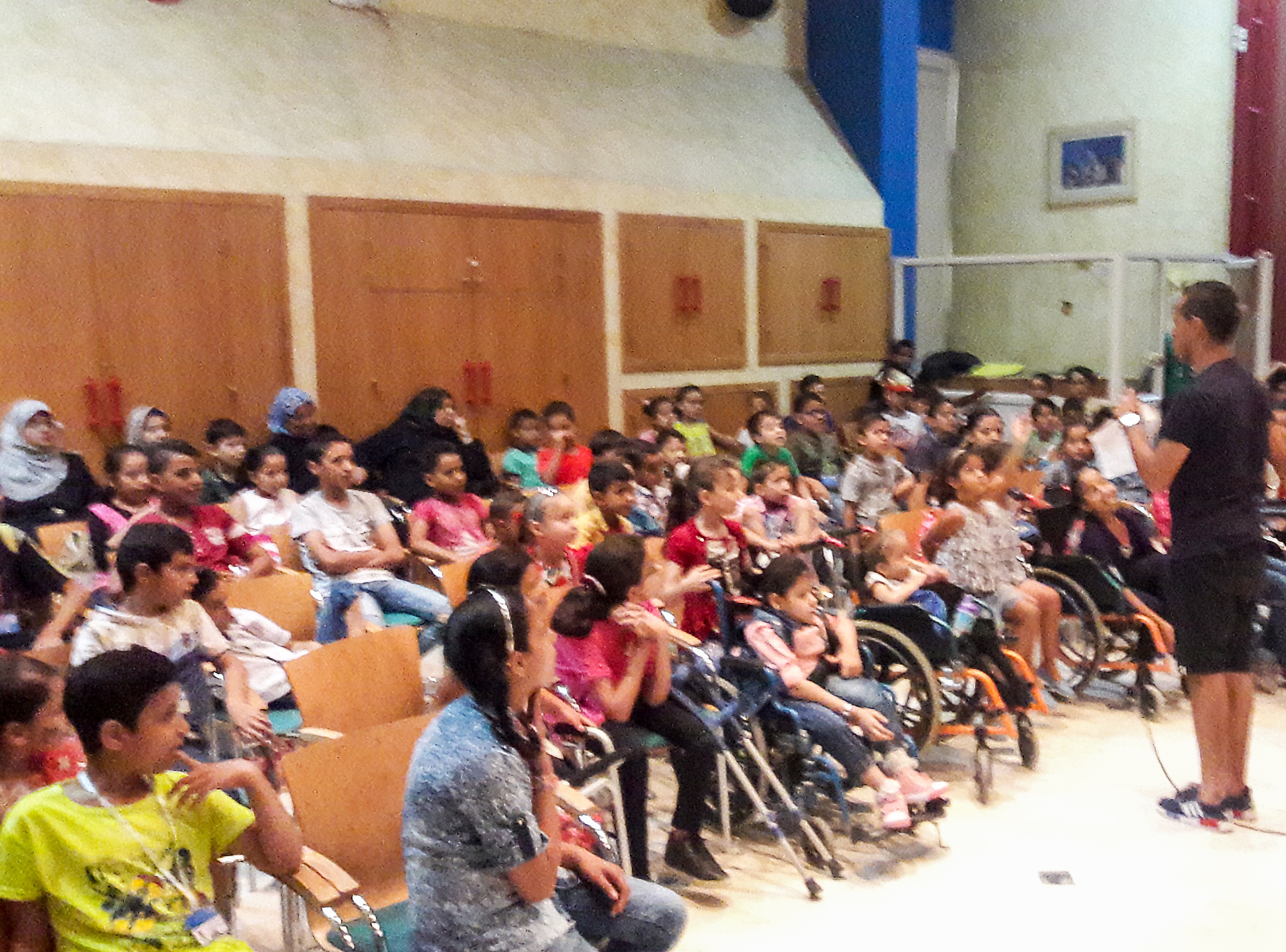 I am a Palestinian from Gaza, which is where I attended the American International School. I am now on my way to study at the American University in Cairo, Egypt. I love my country and the beauty of our traditions and culture. Unfortunately, although many Americans may not be well informed, in my lifetime, my community in Gaza has seen many acts of aggression and violence, including sustained bombing for weeks and months due to the Israeli–Palestinian conflict. The outcome of this is not only physical destruction of the land and cities, but also injury and psychological impact on the children of Gaza. Many children have physical disabilities as a result of the wars and many also experience post-traumatic stress disorder (PTSD).

My goal is to help my community heal, so I applied for the YES Alumni Grant Competition and won funding for my proposal, the Ability in disAbility – Smile to Heal. The project was designed in partnership with the National Center for Community Rehabilitation (NCCR), which is a non-governmental organization that serves the disabled community in Gaza by providing professional, multi-disciplinary services and care. The project targeted seventeen children with disabilities, including quadriplegia, hemiplegia, and PTSD, who receive services at NCCR and fifteen children without disabilities, nine of whom were siblings of the children with disabilities. The purpose of the ten day workshop, which was done in two parts, was to provide all the children an opportunity to learn, have fun, and develop mutual understanding about people with disabilities. We hoped the children’s participation in an experiential workshop would help them overcome misperceptions about the capabilities of people with physical and mental health challenges and for the children with disabilities to gain confidence and skills.

A team of YES alumni spent several months planning the workshop to develop content-rich, fun educational activities. We used the training skills we had learned in the U.S. in our American high schools as well as the YES alumni workshops and conferences we attended over the years in order to do this. We got input in developing the curriculum from four health professionals at NCCR who are trained mental health counselors. The week-long workshop took place in mid-August and for the first couple of days, there were ice-breaker activities and energizers for the kids to get to know each other and for them to become comfortable with our alumni team. A good deal of the workshop was aimed at allowing the children, with and without disabilities, to create bonds and build relationships through involvement and inclusion for all. For days, the kids were challenged to work in groups to create objects together, solve puzzles and teasers, draw and paint, sing, and dance. Each session was designed to develop a particular skill, such as empathy, cooperation, inclusion, and self-confidence. The kids enjoyed the activities and it was clear that the children with disabilities were happy to have had equal roles in accomplishing something special with their peers.

Storytelling is an art and gives children the chance to share themselves, so one day was designated for storytelling. On this day, the YES alumni and the kids read stories aloud and talked about the moral, or idea, behind each story, and also shared their own story. On another day, a band of young musicians from the prestigious Edward Said National Conservatory of Music came to play and sing traditional Palestinian music for the children as a form of music therapy, which is an approach to healing. The joy and happiness on the kids' faces as they danced and sang was overwhelming, and I was deeply touched. Our focus was also on fun; so on other days, a clown entertained the students, we held a drawing competition, and we hosted a magic show. 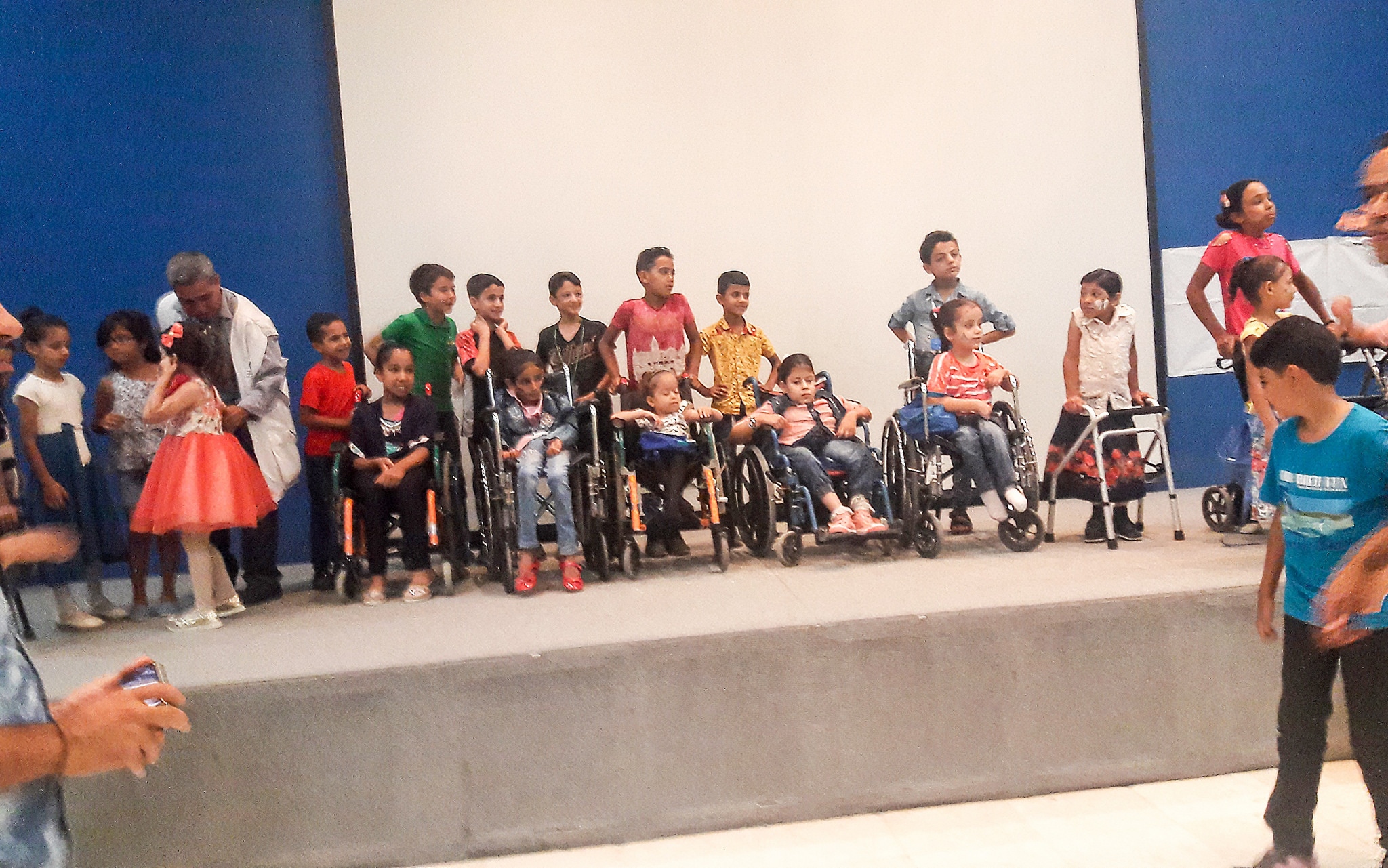 The closing ceremony was held at Al-Qattan Center, which is an NGO that was started by the Palestinian activist and philanthropist Abdel Mohsin Al-Qattan. The Al-Qattan Center works in Gaza in the fields of culture and education with a particular focus on children, teachers and young artists. At the ceremony Dr. Abdelkareem Shaheen, the lead of NCCR health team, spoke and thanked us for our partnership. Members of the YES alumni team, including myself, also had a chance to speak. When it was my turn to talk, I shared my pride and amazement over what we as a group (the kids, their parents, the alumni, the NCCR professionals, and the volunteers), had achieved. I asked everyone to continue to taking steps to make this world a better place. All the speakers and staff said they wished for further cooperation and more projects in the future. Of course, the children sang and danced and participated in the fun competitions, and at the end of the ceremony, the alumni team distributed prizes for the children.

The project proved to be a success as the children and parents expressed how important and satisfying it was for them. One of the girls, Maha, is in wheelchair; she lost her mobility due to a bombing that killed her entire family, except her father. At the end of the ceremony, Maha said, “I haven't been this happy in a very long time. I know I didn't choose to know any of you, but you are like a family to me now.” Maha’s father said, “Since the workshop, I have witnessed strength in my daughter's personality.”

We witnessed a change in the morale of the children with disabilities. We held a post-project follow up event in early September, before the Eid al-Adha holiday. We repeated parts of the workshop and played games that were intended to evaluate the program. We were able to see the difference in the interactions of the kids as they showed more confidence during the activities and were able work and help each other as they had built trust in their relationships. I can proudly say that we achieved the goal of "The Ability in disAbility" as we noticed the change on the kids' faces and in their actions before and after the project.

I would like to thank the AMIDEAST staff and volunteers. I would also like to thank the YES program and its funder, the Bureau of Educational and Cultural Affairs at the U.S. Department of State, as well as Sahar Taman at American Councils for International Education, for leading me through this. Team work is inspiring. No matter how hard a person works alone, it’s the team that allows them to succeed. I would like to thank my team of fellow YES alumni, Anas Ismail (YES 2010-2011 hosted by CCI in Bozeman, MT), Ahmed Ewaida (YES 2010-2011 hosted in Wichita, KS), Heba Salem (YES 2011-2012, hosted by AYUSA in Hanover, PA), Yahya Ashour (YES 2014-2015, hosted by YFU in Fostoria, OH), Heba Al Zaidi (YES 2013-2014, hosted by CIEE in Lake Stevens, WA), and Omar Alrabi (YES 2012-2013, hosted by PAX in St. Luis Obispo, CA).

Learn more about this event by watching the Youtube or Vimeo video that the team made and Yahya Ashour produced!