Three Cultures Under One Roof in Marshall, MN 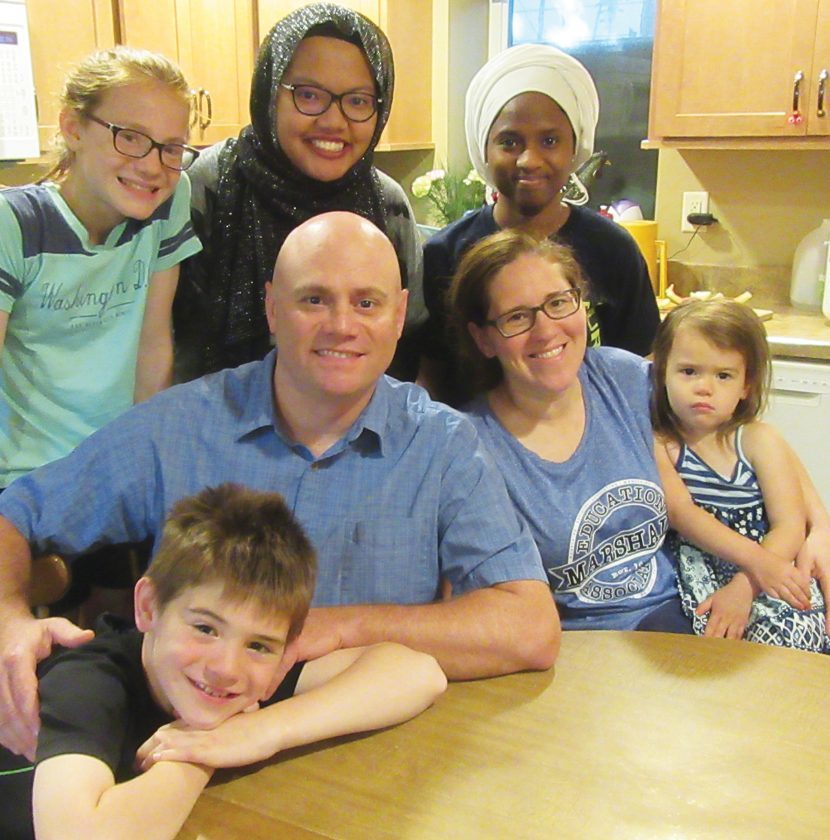 The Dana and Heather Moore family of Marshall got more than expected when they agreed to be a foreign exchange host family for the 2018-19 school year.

They began a year-long family stay [through the Youth Exchange and Study program sponsored by the U.S. Department of State] when they welcomed exchange student Phanita (Mariem) Hiemharn of Thailand. After the year began they added another international student, Hussaina Abubakar of Nigeria, to their household.

“Traditionally it’s been one exchange student with one host family,” Dana said. “When we found out that Hussaina still needed to be placed, we thought it would work to have two. We tried it and it went great.”

Together they formed a family group made up of countries on three different continents. Mariem and Hussaina became big sisters for the Moores’ three children; Foster, Lydia and Cady.

Mariem was chosen from all the students in her class to take part in a foreign exchange. The process required both an exam and an interview.

She said one of the main expectations was human relations skills. In order to represent her school, community and nation, evaluators expected the ability to relate well to people with many different personality traits and to easily take part in conversations.

“I wanted to go to America, and thought the exchange program would be a good experience,” she said. “One of the things I like to do most is to talk with people.”

Hussaina was one of three participants from her school in Nigeria. She said the idea of travel has always been one of her interests. She also enjoys opportunities to learn more about other cultures.

They were both part of an AFS initiative to bring an even greater amount of diversity to foreign exchange travel to the United States.

Large percentages of students visit from either Europe or Latin America. Besides representing two other continents, Mariem and Hussaina bring religious diversity since both are Islamic.

They’d already experienced diversity of religious faiths through life in their home countries. In describing their cultures Hussaina said Nigeria has almost as many Christians as Muslims, while Mariam noted that Thailand has a large Buddhist majority with only small percentages of Muslims and Christians.

They said differences in race, religion, and languages did not create obstacles in their family stay. Instead they quickly became familiar with a similar family-based daily routine and a variety of family recreational activities.

“I’ve learned that there’s much more to the United States than what I’d seen in the movies,” Mariem said. “By coming here, there’s the chance to see and talk to people face to face. That makes a big difference.”

As the year progressed, they also became increasingly familiar with the change of seasons in the Upper Midwest. When the Moore home first needed heat in the fall, everyone learned how it was totally unfamiliar to people in Nigeria and Thailand even though 21st century Minnesotans find it hard to imagine not having a furnace.

Snowfall that was overly tame at first was far different for several months in a row as record snowfall resulted in enormous piles next to Marshall’s streets.

“I’ll always remember the day I scooped snow for the first time,” Husseina said. “I still like snow, but I decided I didn’t like the cold.”

Throughout the year they saw many smaller, interesting variations from life in their countries. In the Marshall area school buses are painted bright orange-yellow. Among the many differences during the school day were dressing in clothes other than a uniform, moving to a new classroom for each class instead of waiting for the next teacher, and having some multi-grade classes.

Lydia said she’ll remember many things about her older sisters from the past year, but that most all she’ll envision their happy, smiling faces.

“They’re always happy,” Lydia said. “If they were ever really grumpy, we didn’t know about it.”

Dana and Heather said their family’s 2018-19 experience made foreign exchange stays something they’ll probably consider again, and that they’ll recommend to other families who want to bring international cultural traditions into their daily household routine.

“It was a very positive process,” Heather said. “Our kids had the chance to see what life was like with older teenagers. It would be worth trying again when they’re are about the same age as the students we’d host.”