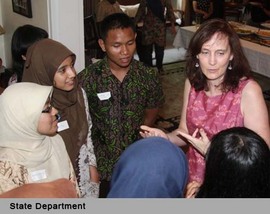 This article was originally published on the US Consulate General Surabaya web site.

Surabaya – June 7, 2010. Thirty-one students from Eastern Indonesia, who are selected to participate in the YES (Youth Exchange and Studies) program, and representatives from Bina AntarBudaya Foundation, the partner of the U.S. Department of State in implementing the program, were invited to lunch at the Consul General’s home.
During opening remarks, Consul General Caryn McClelland noted that this event celebrates the students’ achievements and opportunities. Caryn also said the YES program is about increasing cross-cultural understanding, not only for Indonesians but also for the American families and communities where they will live.
She hoped the students would continue the tradition of YES alumni, who come back from their time in America and strengthen people-to-people contacts between Indonesia and America. The alumni have organized events on earthquakes and disaster preparedness, English language camps, and so many others. More importantly, Caryn told the students to enjoy their time in America and take advantage of the wealth of opportunities that were now opening up to them.
After lunch the students used the opportunity of meeting the Consul General by asking her lots of questions about America. They also performed a dance that Caryn hoped they would teach their American friends while they are in America. The Consulate also invited several YES alumni to participate in the lunch and speak directly to students about their experiences living in the United States and attending an American high school for one year.
Share: