Want To Be The Change? 16 Inspirational Alumni Grant Projects 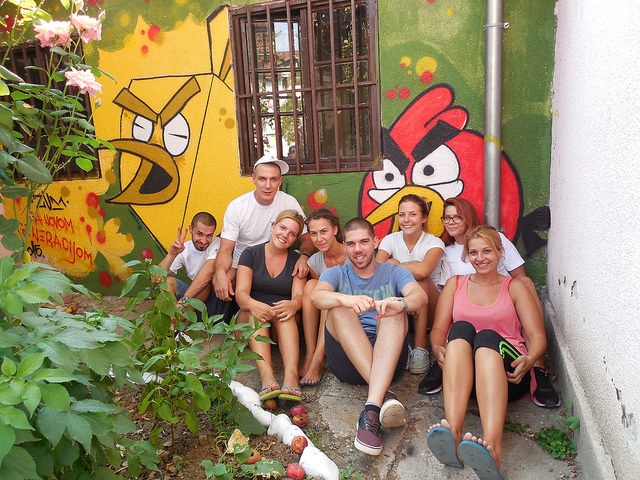 Above: Kristina Lukajic (YES 2012-2013, Bosnia and Herzegovina) and volunteers  created a center for teenagers from at-risk families. See story #1 below for more information.

Do you want to rise to Gandhi’s challenge to be the change you want to see in the world? It’s possible! The following 16 YES alumni projects are making that impact – a change for the better. The projects were conducted by YES alumni from all corners of the world: Albania, Bosnia and Herzegovina, Gaza-Palestine, Ghana, Indonesia, Kosovo, Macedonia, Nigeria, Oman, Pakistan, Philippines, Sierra Leone, Tunisia, and Tanzania. By receiving grant funding from the YES program, alumni, combined with the help of local teams, have been able to make a difference in improving the lives of their communities and countries through their passion and dedication.

Read how Sherina reconstructed her high school’s library and introduced an after school book club, how Kristina created an after school safe space for at-risk youth, and how Fanta helped children living on the streets to enter school. Recognizing the needs of college students in her country, Kulthoom developed an online portal for local companies to provide internships. YES alumni deeply care about the environment, so Ljupce mobilized students to plant trees and to learn about ecology, while Nor-Ain addressed flooding created by the water hyacinth in Southeast Asia.

Interfaith exchanges are also vital in YES countries, so Siti brought together scholars and students for an interfaith conference. Strategic dialogues shift us towards peace, and therefore Mondher organized dialogues with youth leaders to address problems facing disenfranchised youth. Vullnet created a poetry slam event that encouraged youth to share their ideas on societal issues and Shafic introduced and built debate teams in several high schools. Job skills are needed everywhere, so Kamal gave 25 unemployed youth the opportunity to learn the art of Plaster of Paris, and Isha trained women survivors of Ebola in micro-business. English and intercultural skills are essential in our global world so Shujaat’s team taught boys and girls high schools in a remote area of his country. Wasim and Ahmed worked to promote the inclusion of persons with disabilities. Ndeenga brought an HIV/AIDS public health campaign to her tribe.

Feeling inspired? Find out how to apply for a 2017 alumni small grant here.

1. Creating a Safe Space for At-Risk Youth (above and below). Kristina Lukajic, (YES 2012-2013, Bosnia and Herzegovina, hosted by ASSE in Bloomington, MN), set up a teen center in her home town of Banja Luka. The project targeted teenagers from at-risk families by providing them with a safe space at a youth rights organization’s office where they can enjoy spending time after school and receiving support from social service professionals. 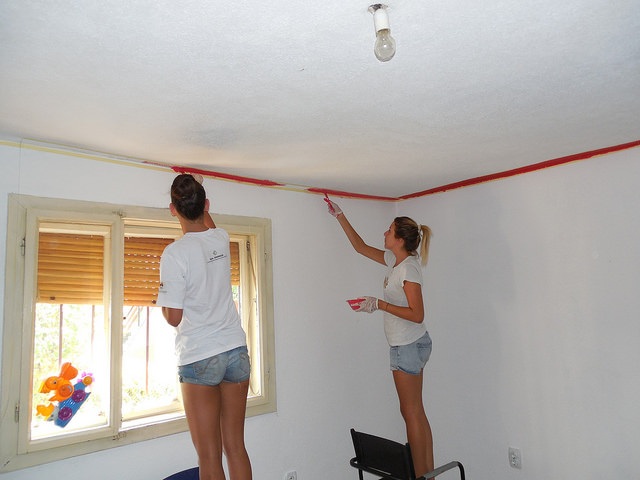 2. English Books for the Library (below). Sherina Dyrma, (YES 2013-2014, Albania, hosted by American Councils for International Education in St. Paul, MN), reconstructed the existing library in her old high school in Elbasan, and provided both new English language books and an American literature collection. She also created an after school book club which introduced debate and public speaking skills. 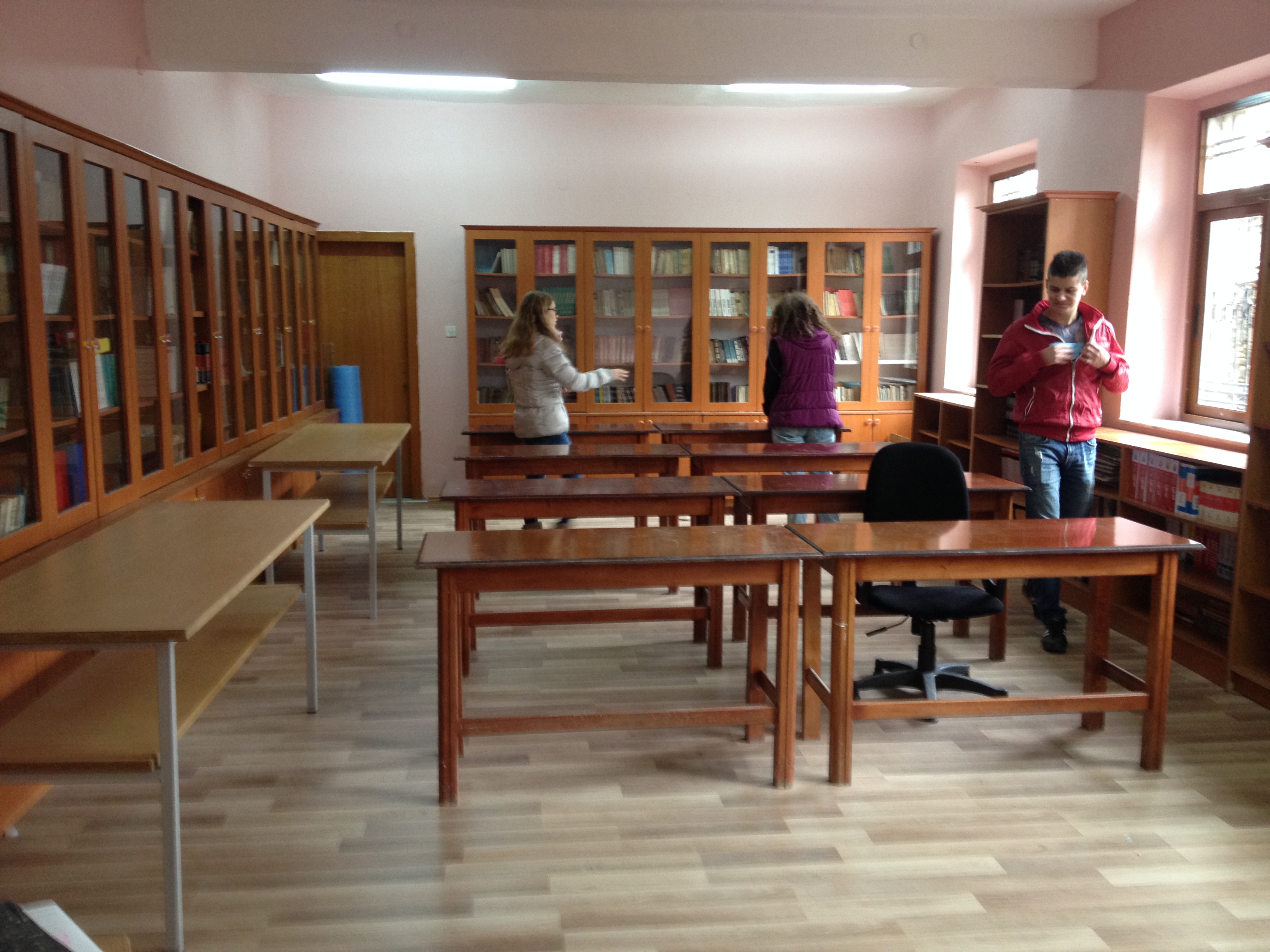 3. School children deserve Opportunities for Education in Sierra Leone. Fanta Kondeh, (YES 2013-2014 hosted by AFS in St. Louis, MO), recognized that lack of education for poor children of Lumbebu in the eastern province of Sierra Leone would have long term negative impact on her community. Fanta spent time counseling 50 students and their parents on the importance of going to school. She conducted home visits, worked with community leaders, and provided school funds for the 50 student participants to assist them in enrolling and attending school.

4. JISSER is a bridge to jobs (below). Kulthoom Al Khamayasi, (YES 2005-2006, Oman, hosted by AYUSA in Traverse City, MI), addressed the issue of youth unemployment in Oman, specifically the lack of access to internships for youth graduating from college, by creating JISSER, an online portal bridging the jobs gap. 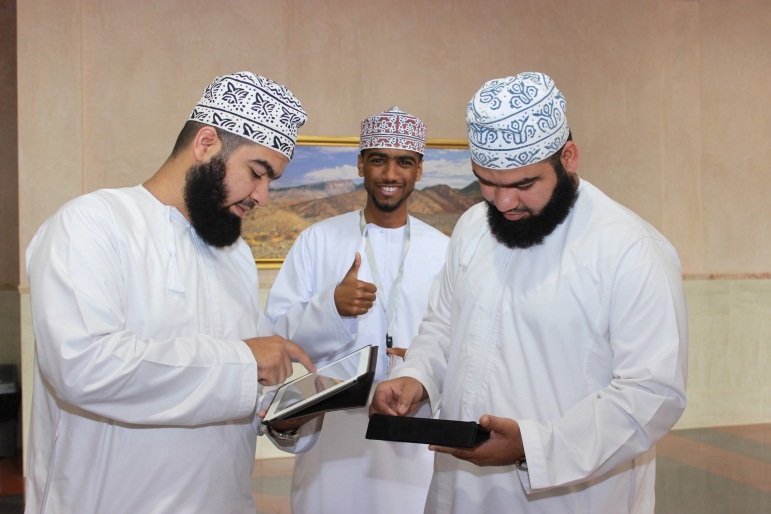 5. Let’s Go Green! Ljupce Stojanov, (YES 2012-2013, Macedonia, hosted by AYA in Kansas City, MO), engaged over 60 primary school students in planting trees for Global Youth Service Day to instill the values of volunteerism and community service.  It also was an opportunity to teach 150 students from the school about ecology, environmental protection, and recycling.

6. The Hyacinth for Green Energy initiative creates an alternative energy source out of an invasive plant responsible for annual floods in South Asia. In seeking out a use for the invasive water hyacinth, Nor-Ain Kumayog, (YES 2008-2009, Philippines, hosted by PAX in Lincoln, AR),and her team found a way to convert the plant into environmentally friendly, smoke-free cooking fuel, creating a new micro-industry.

7. Youth Impact creates a youth network in Tunisia (below). Mondher Tounsi, (YES 2013-2014, Tunisia, hosted by AFS in Gibsonia, PA), brought youth leaders together in Kasserine to address issues facing youth, including unemployment, crime, lack of resources, and youth disenfranchisement leading to radicalization and violence. Through workshops, participants learned about approaches to peace building and creating sustained dialogues, and are building a regional network of youth leaders. Mondher will be speaking at three conferences outside Tunisia about the Youth Impact initiative. 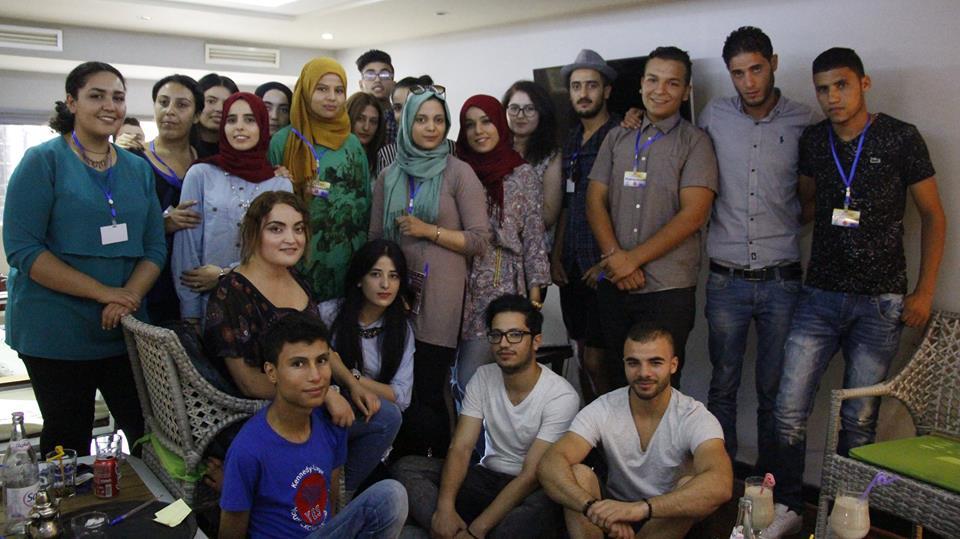 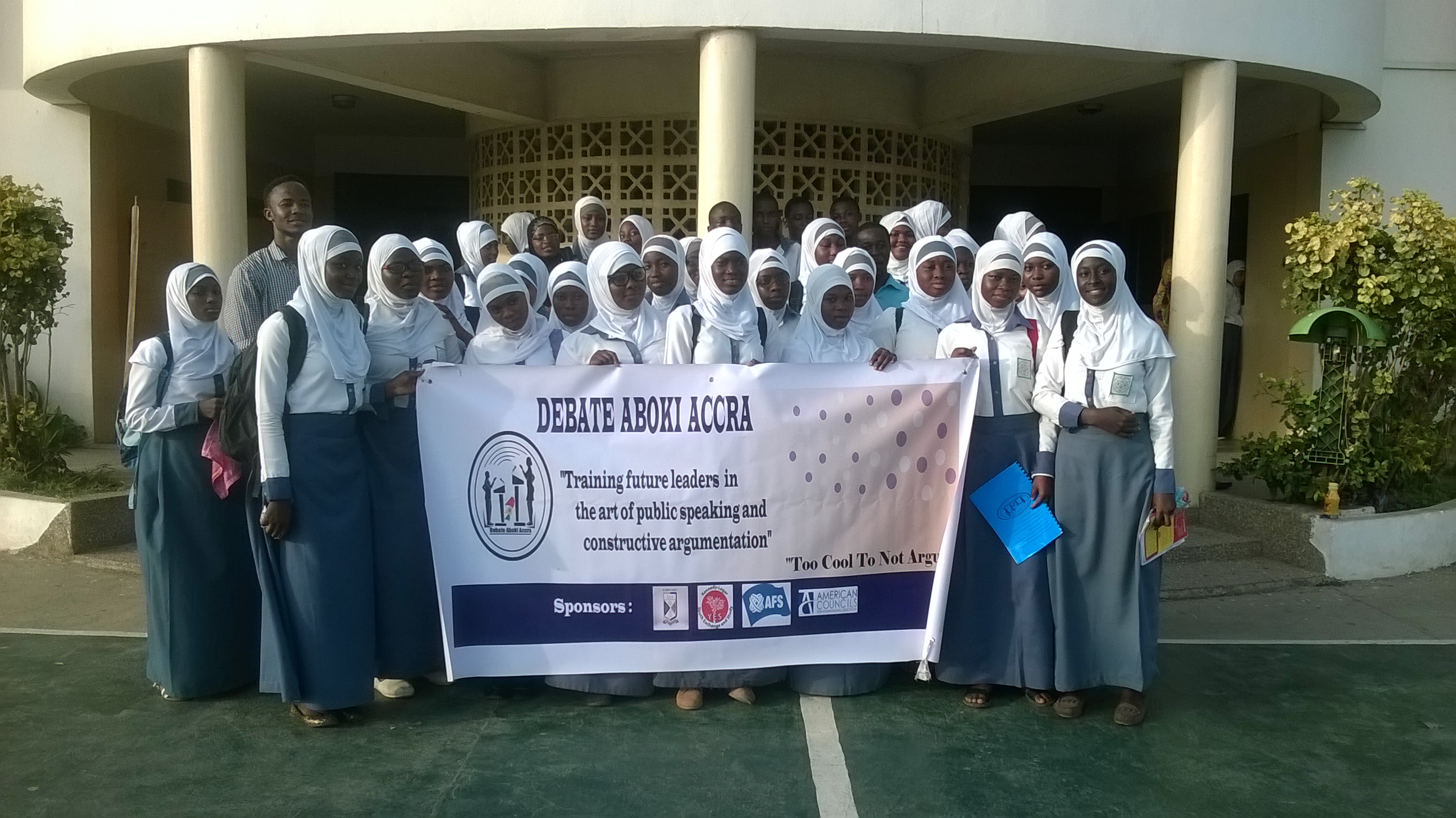 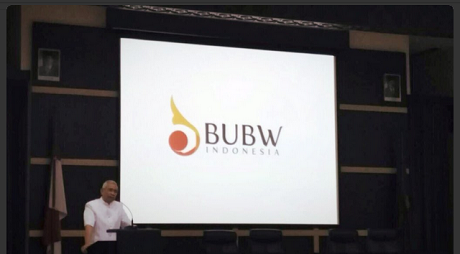 10. Kosovo Slam #Poetry #Word (below). Vullnet Voca, (YES 2013-2014, Kosovo, hosted by CIEE in Burkburnett, TX), provided thirteen spoken word poets the opportunity to perform in a slam poetry competition in Pristina. The competition allowed for artistic and literary commentary and advocacy for disenfranchised populations, including LGBT communities and ethnic groups in the country. 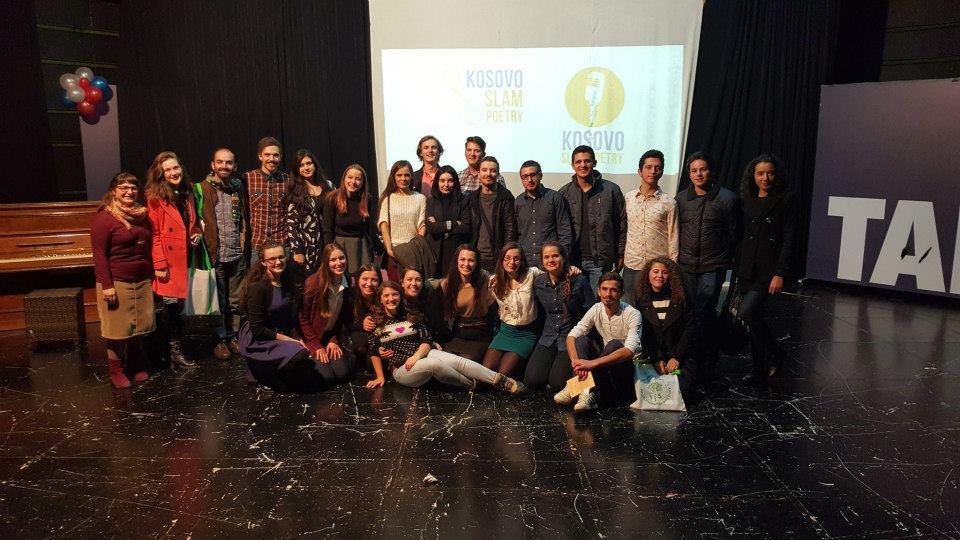 11. Training in Plaster of Paris creates young artisans (below). Kamal Adamu, (YES 2005-2006, Nigeria, hosted by IRIS in Des Moines, IA), is an architect with a combined passion for the art of Plaster of Paris (POP), youth, and jobs skills development. He developed a training program for 25 unemployed youth in his hometown of Zaria to learn POP, a much needed trade in Nigeria. Professional POP artisans provided instruction over a 12-week course where participants had an opportunity to showcase their work. 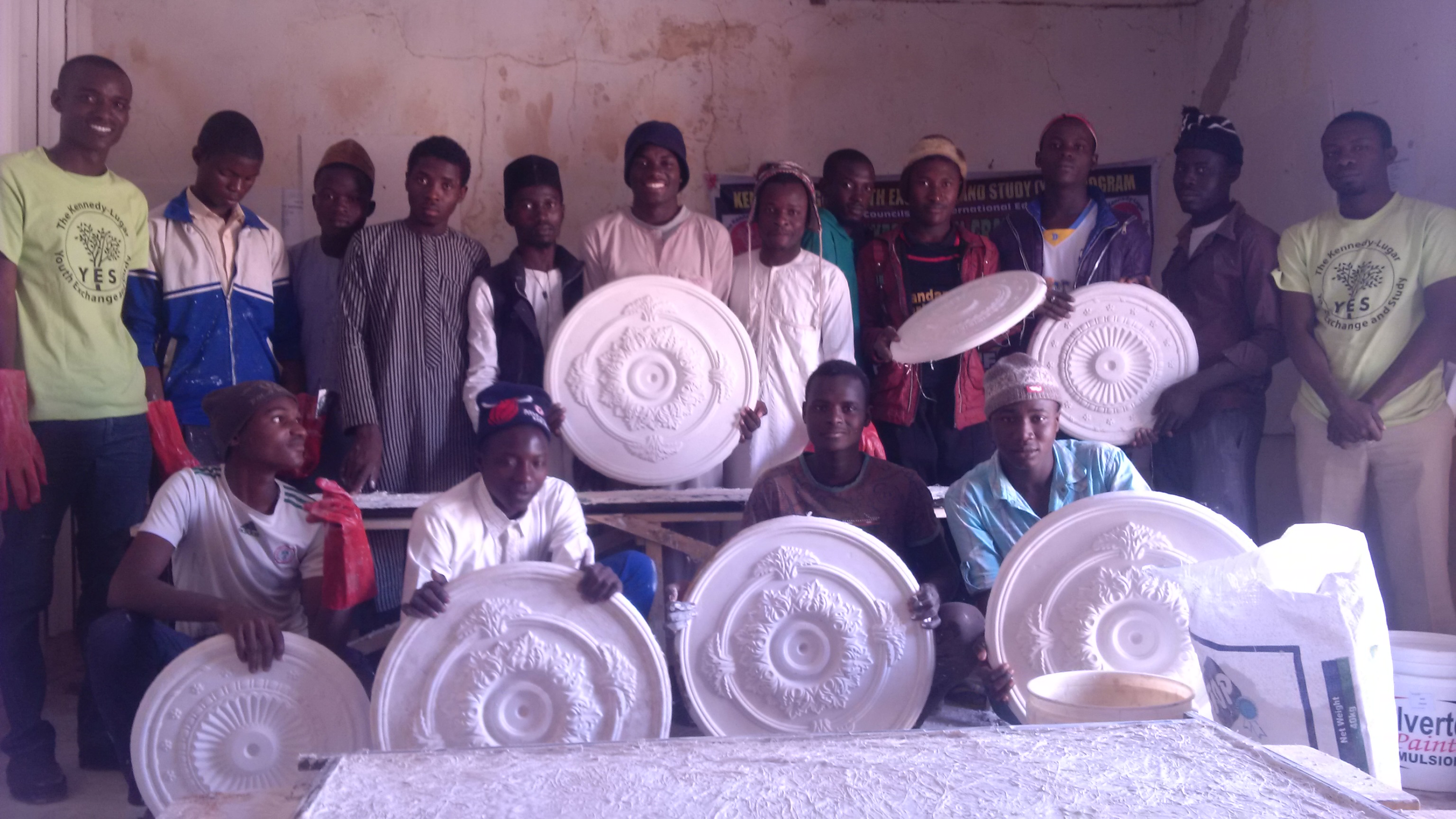 12. Empowering Ebola Women Survivors with job skills (below). Isha Haja Bangura (YES 2013-2014, Sierra Leone hosted by PAX in Springfield, MO), provided women survivors of Ebola with training on creating small micro-businesses. Twenty women from 20 different communities developed business ideas and were provided a small amount of funding to use as capital to start up their business. 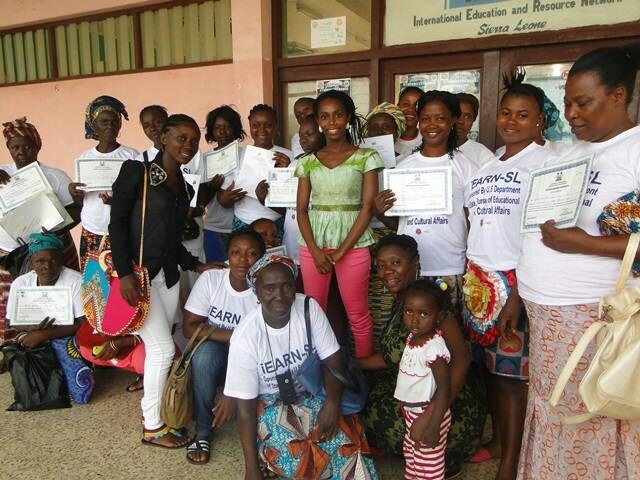 13. Encouraging youth to say ‘I Have a Dream’ (below). Shujaat Ali Khan, (YES 2013-2014, Pakistan, hosted by American Councils for International Education in New Auburn, WI), brought English language workshops to his community in Chitral, an area of Pakistan which is isolated geographically. His ‘I Have a Dream’ workshop, which took place during the wake of a powerful 7.5 magnitude earthquake, was conducted in two schools for 150 high school boys and 150 high school girls. In addition to English and diversity classes, the project provided sessions on career counseling and personal development for these underserved youth. 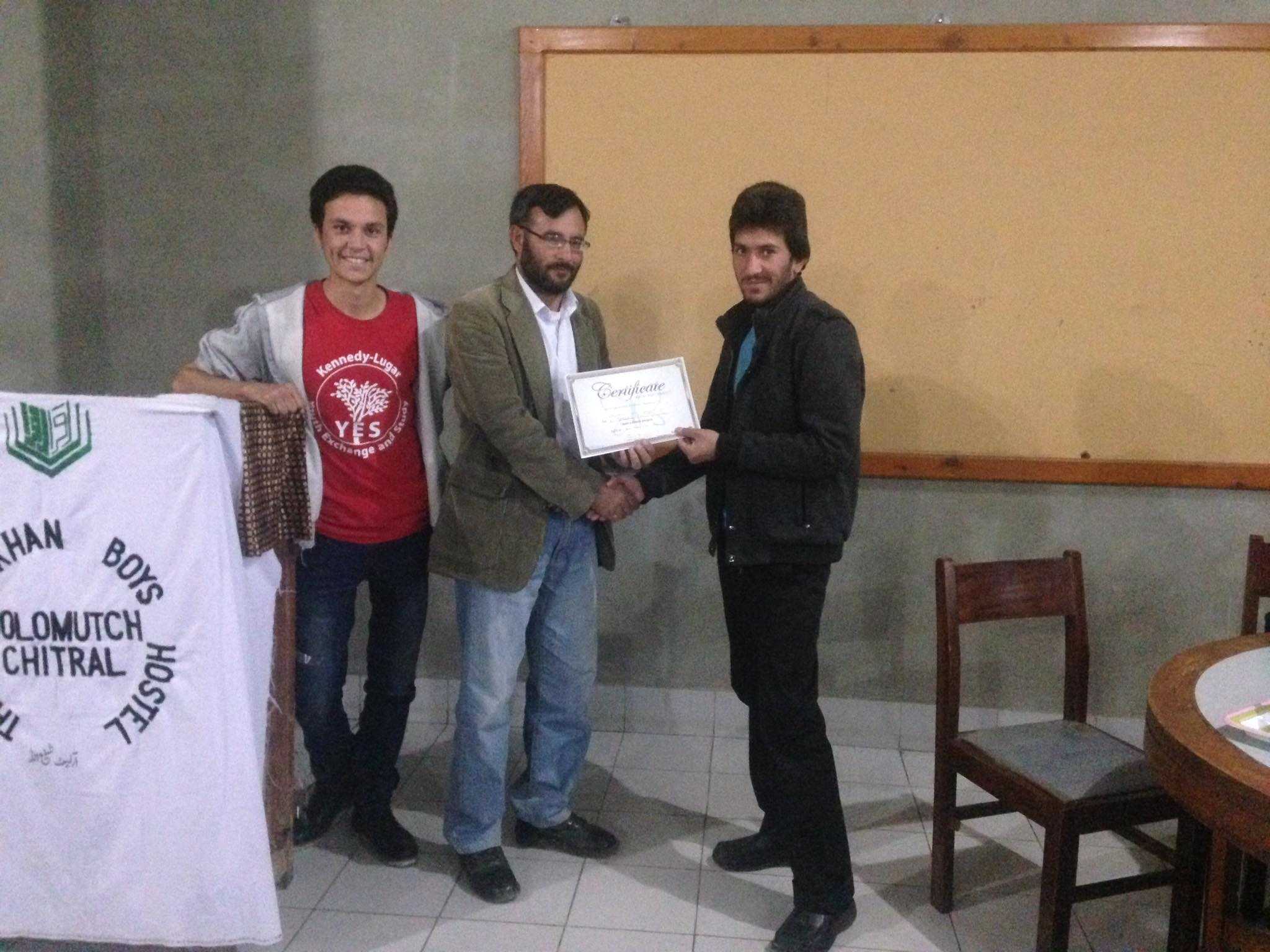 14. Ability in DisAbility workshop teaches empathy (below). Wasim Abuzaid, (YES 2013-2014, Gaza-Palestine, hosted by PAX in Greensburg, IN), wanted to provide opportunities for children who have disabilities and to teach other children about disability inclusion in Gaza. Wasim organized a ten-day experiential workshop for children with disabilites and their siblings and peers, providing each child the opportunity to learn, have fun, and develop a better understanding about people with disabilities. 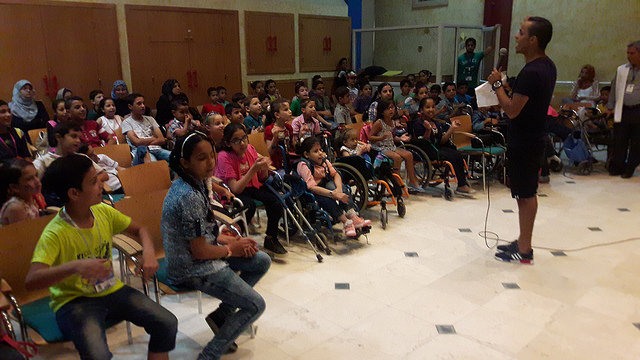 15. Visability initiative advocates for disability rights (below). Ahmad Fathul Aziz, (YES 2009-2010, Indonesia, hosted by PAX in Hillsboro, OR), conducted Visibility of Young People with Disabilities to Access Their Rights, a one-year disability advocacy campaign, in Malang. The multi-event initiative included: an online webinar followed by a seminar, a flash mob campaign, a Dance4Visability show, an Art4Visability workshop, and an exhibition showcasing the creative works of Visability participants. 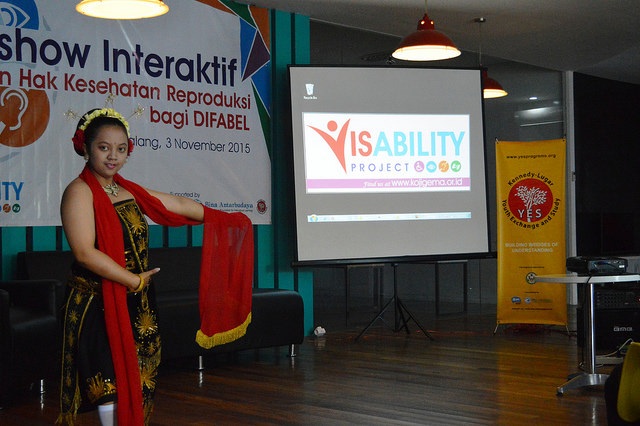 16. Organizing a Public Health Campaign on HIV/AIDS (below). Ndeenga Shamata, (YES 2009-2010, Tanzania, hosted by IRIS in Fort Madison, IA), led a campaign to educate her tribe, the Maasai, on HIV/AIDS. Ndeenga’s public health seminars provided information on HIV/AIDS to over 1,000 members of polygamous families, including young school children and women and men. 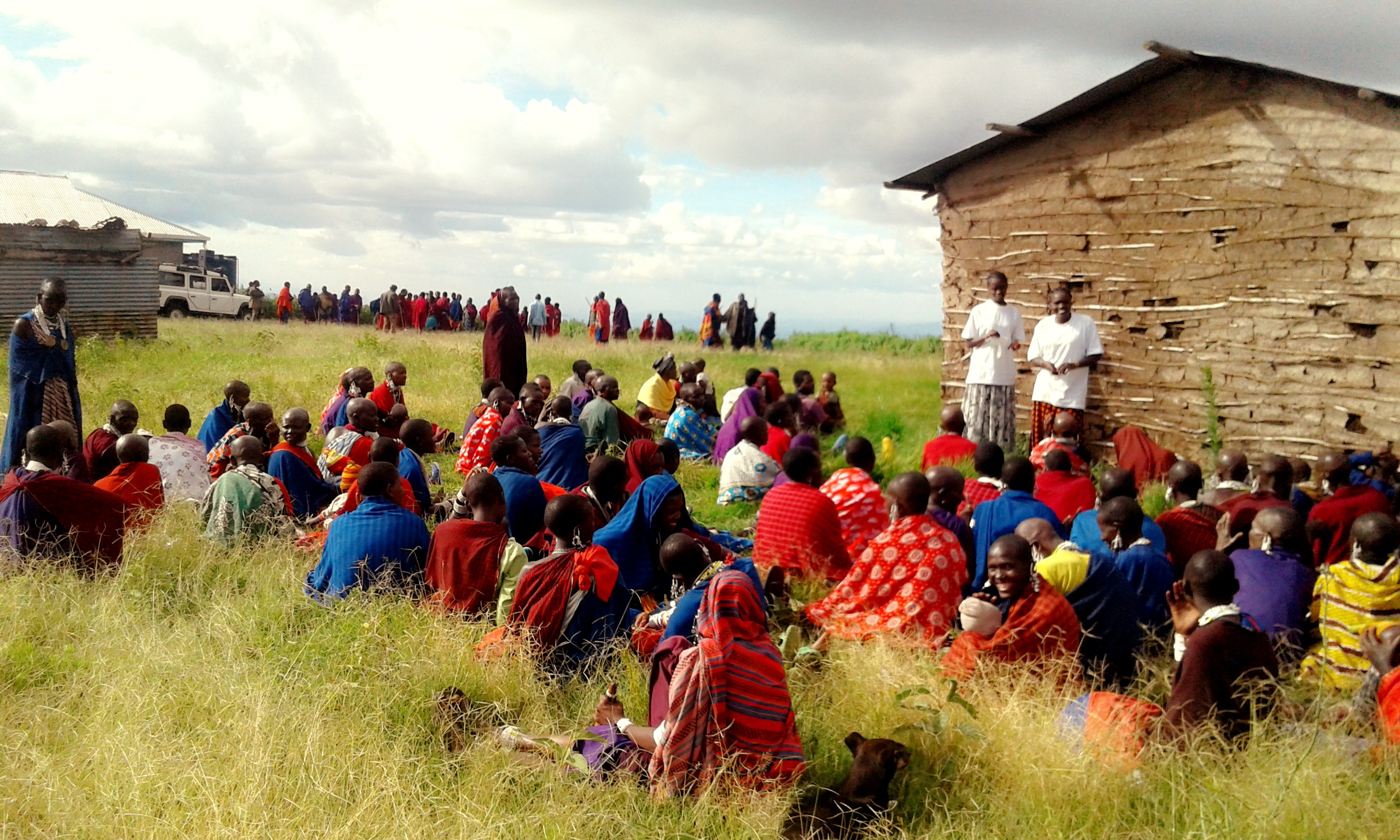 Are you a YES alumnus/a and interested in applying for a 2017 alumni small grant? Find out how to apply here!