We Are All Equal: YES Alumni Interfaith Harmony Workshop Project 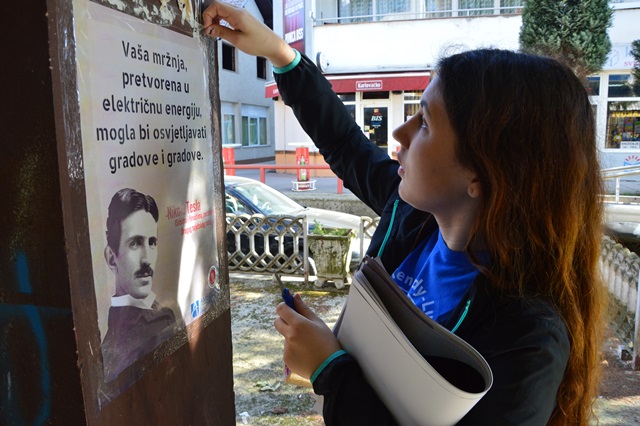 In March 2015, I had the privilege of attending the YES Alumni Interfaith Harmony Conference in Rabat, Morocco. This workshop focused on interfaith dialogue and ways that we, alumni, can implement it in our daily lives through volunteerism. I have always been passionate about fostering interfaith and interethnic relations and dialogue, but I was never sure how to go about it. After my stay in Morocco, I was truly inspired by the overwhelming love, understanding, and harmony that I had experienced, and it motivated me to spread that powerful message around my community.

My community is one of the most problematic areas of Bosnia and Herzegovina in terms of religious and ethnic segregation and discrimination. Muslims and Catholics make up most of its population and there is very apparent animosity between the two. The two religious groups in my community attend separate schools, and as a result, interaction between them is almost non-existent. That is why I started an anti-nationalism, interfaith harmony campaign, which aims to raise awareness about this ever-growing problem through visible, thought-provoking posters that I posted all over town.

For this project, I benefited from another YES-alumni training, the Digital Storytelling workshop. Bosnia and Herzegovina Alumni Coordinator Davor Tunjic ’13, who attended the Balkans Region Digital Storytelling Workshop in 2014, held a training for alumni in Sarajevo, where I learned a lot about reaching your target audience through media. I acquired skills that helped me execute this campaign, being able to create noticeable and striking posters that instantly attracted people.

For my posters, I used quotes from influential, historical figures in Serbo-Croatian language and posted them right next to graffiti with hateful messages or next to posters for political parties that promote ethnic and religious division of people. My posters called for peace and condemned religious intolerance and bigotry.

The photo below is Albert Einstein's famous quote: Nationalism is an infantile disease. It is the measles of mankind. 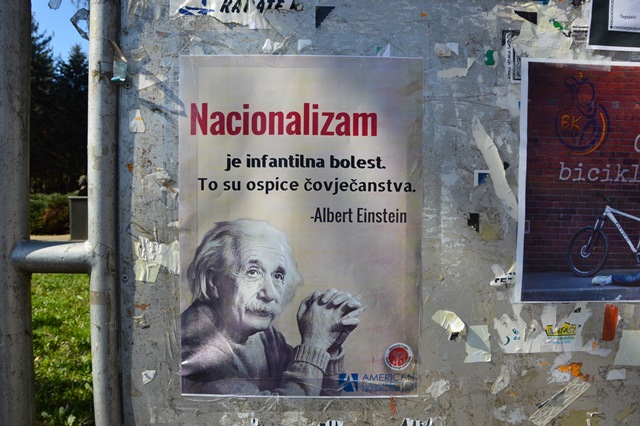 A campaign of this sort had never been executed in the history of my town and this was one of the first successful attempts at addressing this problem properly and effectively. It reached a lot of people and it definitely made a positive impact all around. I saw numerous photos of my posters on social media (Instagram and Facebook) being published by young individuals who applauded the cause and acknowledged the importance of the message.  Some of those posts had a huge reach, hundreds of likes and many comments.

In addition to the poster campaign, I held a discussion with middle school children about the meaning of each poster and their general take on interfaith relations. It was important for me to reach out to younger generations, as I believe they are the only ones who will be able to put an end to these imposed divisions. I am planning to do similar activities in other towns affected by this same issue and would like to hold a large scale Interfaith Harmony Workshop project later this year.


Pakistani alumni host a webinar to increase their disability and inclusivity awareness.

Expanding Entrepreneurship in the MENA Region

How did your YES experience change you? What have you learned about yourself, the U.S. and the world?