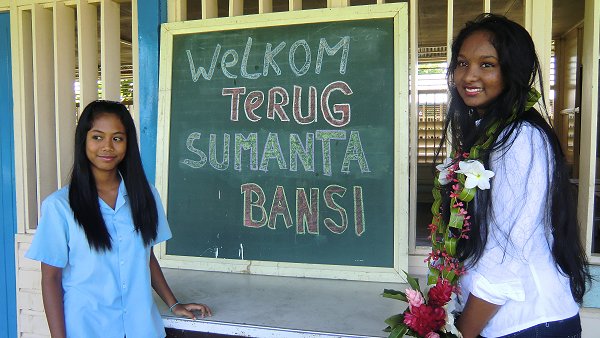 “I want to get out of this place. If I don’t make sacrifices I’ll be a Wageningen woman after 10 years.” Sumantha Bansi (17) is determined to leave her life as a village girl behind her. Every morning she gets up at 4:00 am to study, leaves with the bus at 5:30 am to attend the VWO (pre-university school) in Nieuw Nickerie and when she gets home she first teaches English to 27 drop-outs before starting on her own homework.

A life in Wageningen has nothing to offer to this young career hunter. The Nickerian village is too small, too remote from everything, there is too much gossiping and the prospect of ending up a housewife is a nightmare to her. Sumantha wants to become a brain surgeon, the first in Suriname. Marrying her off is not an option if it is up to her. “The person that wants to marry me at a young age will be sorry”, she warns. Not that she is that difficult, she adds, but she simply has other priorities in her life at the moment.

Sumantha’s big dreams are the result of one year of living and studying in the United States. She was selected for the Kennedy Lugar Youth Exchange and Study Program (YES) and spent a year with a host family in Florida. She attended lectures at university, obtained high marks, made many new friends and went on a road trip across the country. “That was the greatest present from my host families. I saw 25 of the 52 states: from Hollywood, Texas and Chicago to New York. I have really enjoyed too much.”

At first her parents were less enthusiastic. Although they finally also realized that the adventure would open up doors for Sumantha, they had to let go of their daughter early. The new ambitions of their daughter, since her return, have also led to conflicts at home especially with her traditional father. “My father thinks in the way people did in the past. He wants me to think like him,” she says.

Before she graduates and can make her big step to university, Sumantha now tutors female drop outs from her neighborhood. She teaches them English so that they can help their children with homework, read the English pages in the newspapers and can write good English sentences on Facebook. Her “students” are women because they are easier to deal with than the men from Wageningen. “You can teach me nothing”, the men often say. “It is quite difficult to deal with that attitude.”

Sometimes she gets homesick and with so much homework that she does not know how to start and where to end. The hours she spends teaching English calm her down. It is fun and relaxing but also motivates her. “Then Isee the women and what has become of them while they had so much potential.”

Self-assured and committed, the village girl embarks on her academic mission. She then especially thinks of her last host mother, a rich woman, a psychologist with a Ferrari. Sumantha has set her as her symbolic goal. Some day, she also wants to drive such a car. I have to study to do so. If I listen to a song when studying I immediately think: “This will keep me from that Ferrari for five minutes.”

Caption: Sumantha is welcomed back by her classmates and teachers in Wageningen after her year abroad in the US