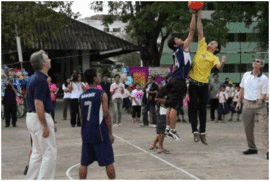 To celebrate Thai Children’s Day, on Saturday, January 9, U.S. Ambassador Eric G. John dedicated playground equipment donated by the Embassy, and toys donated by Mattel, to the Mahamek Home for Boys in Bangkok. Mr. Pinchai Pinkaew, the Deputy Director of the Department of Social Development and Human Security joined Ambassador John at the ceremony. After cutting the ribbon to the playground area, Ambassador John handed each of the home’s 134 boys a toy car donated by Mattel and a donut donated by Dunkin’ Donuts.
Alumni from the State Department’s Youth Exchange and Study Program (YES) also took part in this special event and helped entertain the children. The program included a friendly 10-minute basketball game, in which the Ambassador led an Embassy team against the team from Mahamek.
The Embassy team included three YES alumni: Mr. Nattawut Wetprasit (‘07-08), Mr. Sarawut Malaiphong (08-09) and Mr.Katcha Rerngsamut (07-08). Other YES alumni who did not participate in the basketball game spent time playing with the younger children on the new playground equipment and handed out donuts donated by Dunkin’ Donuts. The boys, too young to shoot hoops, were delighted to use the new playground equipment, play with their new cars, and have their pictures taken with the Ambassador and his daughter Nicole. The event put a lasting smile on the faces of all who participated, and made for a terrific way to celebrate Children’s Day!
These YES alumni were great role models for the boys at Mahamek, demonstrating through their actions how we can all help others. Sarawut and Katcha are also graduates of YES Alumni Training of Trainers Workshops, and Nattawut has been a Group Leader at the YES End of Stay orientation in Washington DC.
Read more at the US Embassy Bangkok web site.
Share: