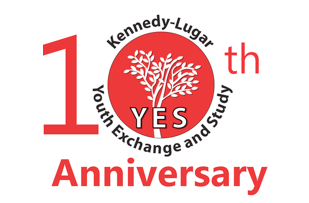 On December 12, 2013, the program hosted its final virtual reunion party. The YES 10th Anniversary Virtual Reunion was a 24-hour long event that celebrated the impact of the YES program and honored the thousands who have participated in the program, including host families, host schools, host communities, partner organizations in the United States and overseas, the U.S. Department of State, the U.S. Congress and countless other supporters of the program.

We invited all individuals and institutions that participate in, and support the YES program, to celebrate with us through numerous virtual events, videos, and a photo campaign as well as on Facebook and Twitter. The day kicked off with a special message from Evan Ryan, the Assistant Secretary of State at the Bureau of Educational and Cultural Affairs. Nearly 300 alumni submitted "I <3 YES because…" pictures and over 25,000 people from the YES community engaged with Twitter and Facebook campaigns.

Thank you YES for making the 10th Anniversary year so memorable!