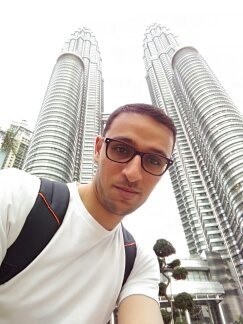 In 2004, Abdelraham Migdad (YES 2004 - 2005, hosted by Ayusa in Exton, PA) joined the third cohort of YES students from Gaza. Now in the YES program's 15th year, we caught up with Abdelrahman to hear about how his international exchange journey has continued - to East Asia!

Since his stay in the U.S., Abdelrahman says he has learned a great deal. Abdelrahman thinks that the YES program and other exchange programs are an opportunity to explore other cultures and learn about other people through academic programs that engage a person in extracurricular activities, which is priceless. He feels privileged to have been part of the Fulbright program in 2012, which allowed him to study at Pepperdine University in Malibu, CA. Now he is in Japan studying for a Ph.D. Abdelrahman says, “These programs are life-changing, with them you are comparatively advantaged over others and better equipped to serve your community.’

To Abdelrahman, the YES program was instrumental in his success. It was competitive, challenging, and demanding. When he looks back at all the community service he took part in and the personal success he attained, it gives him a better understanding of the value of such programs. Now he is spreading that message to another corner of the world, sharing his experiences from both Gaza and the US.