Alumni Responded to the Call for Volunteers

Alumni from all over Pakistan responded to the call for volunteers during the country’s biggest flood of 2010.  The disaster struck as alumni prepared for their national conference in the small town of Ayubia. Due to the heavy rainfall, the conference was postponed and the alumni were asked to organize relief efforts instead. 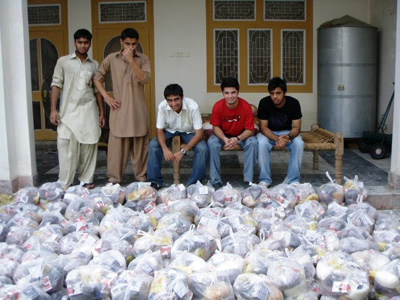 The country was under devastating conditions, as heavy rains continued for almost four weeks. Dams overflowed, property was damaged, and agricultural areas were destroyed. Thousands of families were misplaced, and the death toll continued to rise. On August 2nd, alumni began fundraising for the flood victims. They solicited donations from friends and family, and were able to collect more than half a million rupees (almost $12,000 USD). Many creative ideas were also utilized to raise additional funds, including the design and selling of Patriotism Wrist Bands, social events, and the placement of donation boxes at local schools and universities. YES alumna Zahra Ramzan Ali ‘05 even organized a fundraising project while participating in an internship program at Lehigh University in Pennsylvania.

Packages that included food, clothes and other basic essentials were put together and shipped to families throughout the country. The first delivery that went out to the flood victims was in Charsadda, a village near Peshawar, where more than 40 families benefited. Two full trucks of food and clothing packages went to a flood relief camp in Karachi that was set up by the Pakistani government.  More than 3000 displaced victims were moved to this camp, and the materials were distributed by a team of 18 alumni and other volunteers. Medicine from local hospitals was also donated and distributed.

The flood relief efforts haven’t stopped, and alumni are still generating and donating materials. They have also started to look beyond the relief efforts, to come up with ways to help rehabilitate the country so that victims may get back to their normal lives.  There is a lot of work that still needs to be done, but the spirit and energy of the alumni is enough to succeed and continue to give back to their community.