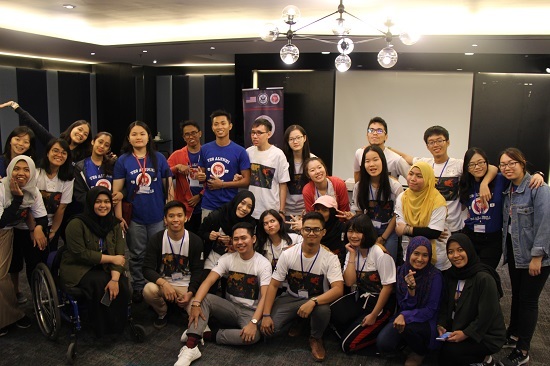 In celebration of this year’s IDPD, YES Alumni Malaysia had the pleasure of organising the ‘Inclusive Society: Look at our Abilities, Not Disability’ (ISLAND) regional conference from 1-4 December. The Conference provided a platform for 18 YES alumni from Malaysia, Indonesia, Philippines and Thailand to share and learn, to better understand and brainstorm for ideas to address issues surrounding persons with disabilities in their local communities. Two of the participants were alumni with a disability — Ernest Teoh (a Malaysian YES ’18 alumnus, who is blind) and Qurrata A’yuna Adrianus (an Indonesian YES ’14 alumna, who is a wheelchair-user).

I first conceived the ISLAND conference when I attended the YES alumni Social Entrepreneur (Change-Makers) Workshop in Alexandria, Virginia, in March 2018. As an alumna with a disability, I'm highly passionate about the rights of persons with disabilities and strive for a society fully inclusive of persons with disabilities. It goes without saying that my greatest inspirations came from my American exchange experience.

The inspiration for the conference title came from Robert M. Hensel’s famous quote, “Know me for my abilities, not my disability”. It is also worth pointing out the irony of the acronym, “ISLAND” — ironic because of John Donne’s resonating aphorism, “No man is an island, entire of itself; every man is a piece of the continent, a part of the main,” — thus, persons with disabilities, too are “part of the main” and, therefore, should be fully included in society; a bold irony that is also a loud calling for action.

On the opening day, the alumni organizing team was energetically up and about overseeing final preparations. For weeks, they had been working tirelessly to bring everything together. Everyone was buzzing with anticipation for the sessions that were to come. After introductions and an ice-breaking session — not to mention, pizza! — participants were formally introduced to the conference, its goals and objectives, and the essence of the United Nations Convention on the Rights of Persons with Disabilities (CRPD) and the IDPD. This gave the participants a picture of not only the rights of persons with disabilities, but also a notion of how very much more we have yet to progress in advancing those rights. 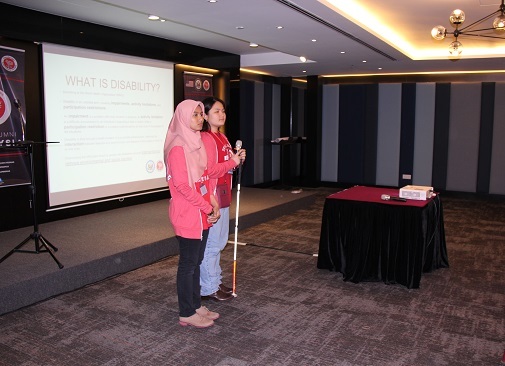 The following session examined the current status of disability rights and accessibility in the South-East Asian region; a session during which participants were divided into groups according to their home countries and conducted a thirty-minute presentation on the state of persons with disabilities and their rights in their respective local communities. During each presentation, participants in the audience asked questions that helped them better comprehend and made comparisons amongst their communities. By the end, everyone had a lot of information to process! Nevertheless, they were eager to dive right into the session on breaking stereotypes, where participants explored the various misconceptions towards persons with disabilities and debated the causes and how best to address such stereotypes. This was certainly no easy feat, but the biggest takeaway from this session was “ask? yes. assume? no.” And, #JustAskDon’tGrab, which was frequently brought up during discussions throughout the conference. And that concluded the first day! 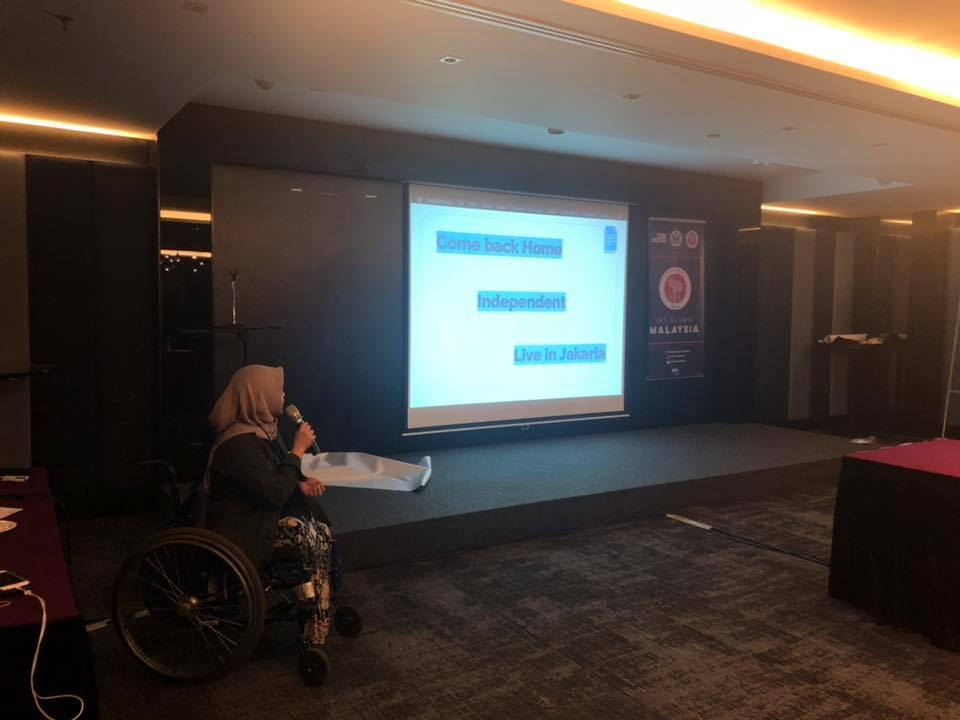 The next day started off with reflections and a general Q&A before launching into the next session—a forum consisting of a series of panel discussions, which were also streamed live on Instagram. YES alumni not involved in the conference were also invited to attend. The first part of the forum discussed issues surrounding visible disabilities. The panelists — all of whom are prominent advocates for disability rights — were Prof. Dr. Ruzita Mohd Amin, (a lecturer of International Islamic University Malaysia, who is a wheelchair-user); Mr. Faiz Shuhaimi (a youth volunteer and advocate, who is hard-of-hearing); and Ms. Amanda Kong (a lawyer, who is blind). 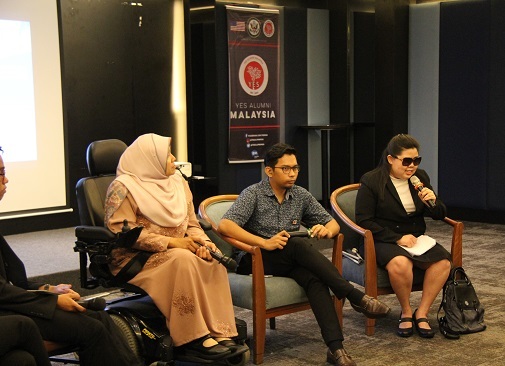 The second part of the forum took place after lunch, this time discussing issues surrounding learning disabilities. The panelists — once again consisting of disability rights advocates — were Dr. Daniel Leong (a former lecturer in the field of special education, who is autisitc); Mr. Fazri Hassan (YES ’11 alumnus and a teacher of primary school children with learning disabilities); and Ms. Puteri Farhana Dato Megat Ahmad Shahrani (a strong advocate for autism awareness, whose brother has severe autism). Despite each forum lasting approximately two and a half hours, the participants felt it was not nearly enough time, for they were all highly intrigued and had so many questions! At the end of each forum, the participants had time to mingle informally and speak with the panelists.

The session that followed helped put together all that the participants had learned so far and enabled them to begin forming their action plans. After dinner that evening, the organising team took the participants on a cultural outing around Kuala Lumpur. Far from merely feasting on the joys of the city, the participants were tasked to observe anything whatsoever that were either inclusive of or barriers to persons with disabilities. Some of the observations made, for instance, were of inaccessible staircases in newly opened and popular tourist sites, poorly maintained and inadequate tactile pavements, an airlift for wheelchair-users that were not available in some of the other countries, and much, much more. Needless to mention, the day ended with the participants filled with excitement! 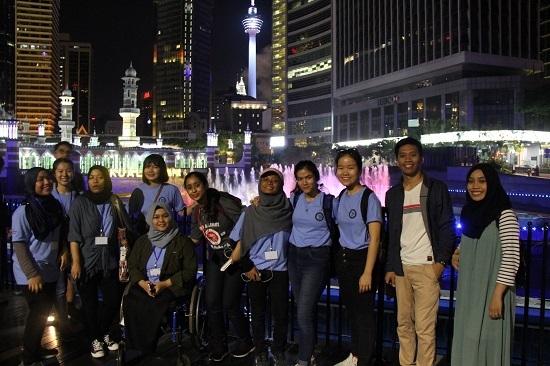 Monday, the 3rd of December — International Day of Persons with Disabilities 2018! After their morning reflections, participants settled in for a video conference session with Mobility International USA (MIUSA) via Zoom. The three representatives of MIUSA — Cindy Lewis, Justin Harford, and Olivia Hardin — all of whom dedicated their Sunday evening to spending time with the participants, shared inspiring and thought-provoking details about advancing disability rights and building community actions, and left participants with some great resources to take home with them.The participants then explored possibilities and the different types of actions — passive, active, or proactive — that could be taken. 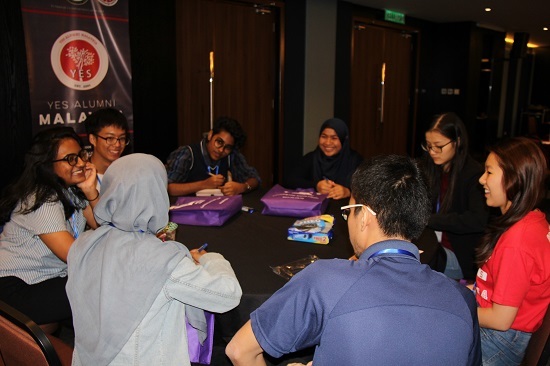 After lunch, all participants had brainstorming sessions to plan their very own projects that would, in one way or another, promote the rights of persons with disabilities. Each participant was asked to come up with at least one short-term action and one long-term action they could conduct in their home communities. They were encouraged to work in groups according to their respective countries for the short-run projects, whereas they were encouraged to plan their long-run actions in relation to their passions or careers. After some brainstorming, YES ’17 alumna, Umi Nabila Mat Yusuf, guided the participants through some steps that would be helpful for them when putting their ideas into action, especially where the short-run projects are concerned. Nabila adopted the model she has recently learnt from a YES Alumni Training of Trainers workshop.

Then, the real excitement of the day began, for it was time for the dinner celebration! The dinner was attended by Mr. Dean Thompson, Deputy Chief of Mission at the US Embassy; his spouse, Ms. Jane Thompson, who has over 25 years’ experience advocating for and working with children with disabilities; Dr. Mohd Nor Azman Hassan, representing the Malaysian Minister of Education; Ms. Khalilah Dato’ Mohd Talha, National Chairperson of AFS Malaysia; Ms. Atty Sulaiman, National Director of AFS Malaysia; AFS Malaysia staff members, and members of YES Alumni Malaysia. As a symbolic opening to the IDPD dinner, Ernest Teoh performed a set of awe-inspiring music with his violin. Guests were further entertained by performances from each represented country. 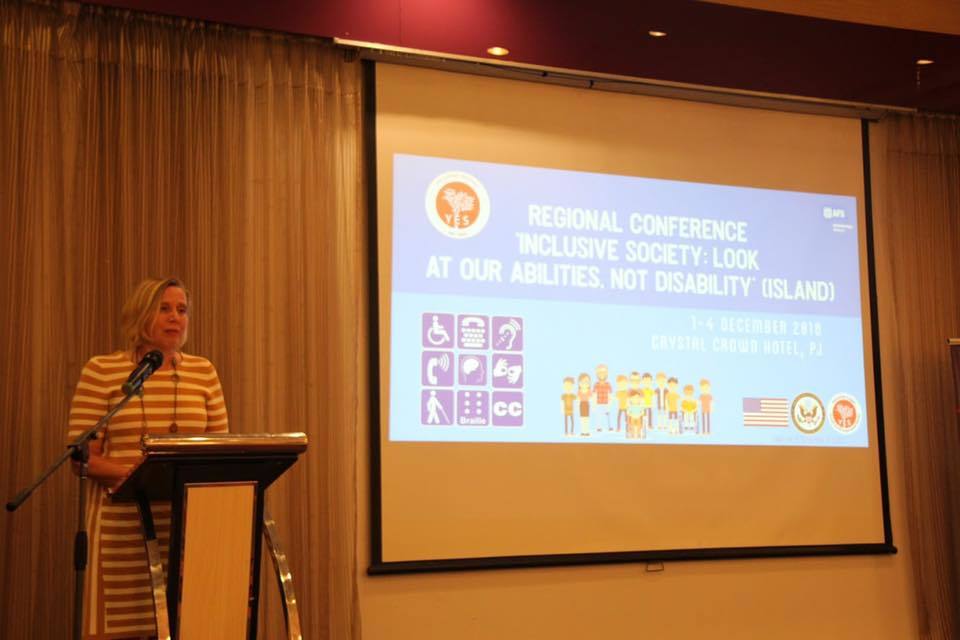 The final day started off with reflections, followed by the participants presenting their projects or ideas, which included discussions, Q&A and suggestions to improve each idea. Some of the most intriguing ideas, among others, are conducting disability awareness workshops in high schools; writing novels and children’s books that feature protagonists with disabilities to raise awareness; setting up support systems to enable students with disabilities to have better access to the YES program; and more. 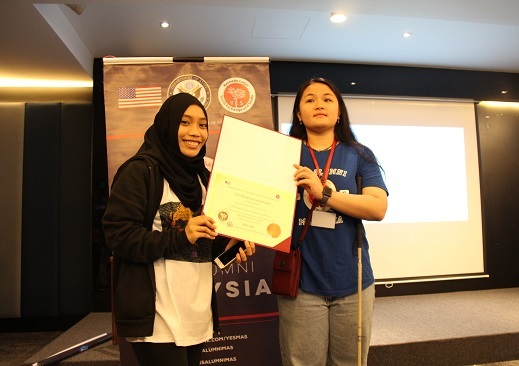 All too soon, it was time for the closing ceremony, in which each participant received a certificate of completion, followed by a gift exchange. Then came goodbye … and despite the parting, it is to the organiser’s infinite hope that every participant will return to their home communities and carry out their brilliant ideas, all in the spirit of promoting an inclusive society for persons with disabilities. Thank you to the US State Department for sponsoring this conference. Hopefully, the ISLAND regional conference 2018 is only the beginning — hopefully, persons with disabilities will no longer be excluded like an island in future.