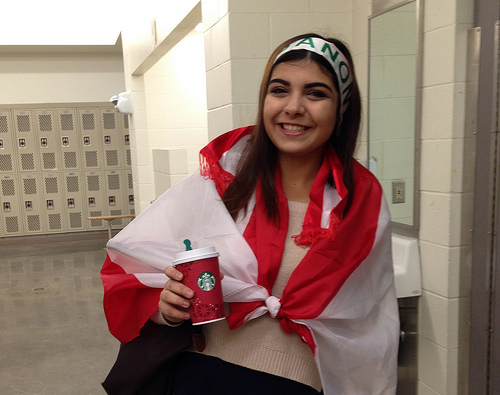 Roaa Hamadeh is a current YES student from Baakline, Lebanon, who currently lives in Bainbridge Island, Washington. As a part of her participation in International Education Week (IEW), Roaa taught classmates in her French class at Bainbridge High School the Lebanese national anthem; it just so happened that Lebanon was celebrating its Independence Day that week!

Roaa thought people interested in learning the French language would be equally interested in learning another foreign language. This gave her the idea that she could teach others her country’s national anthem in Arabic. According to Roaa, it took four class periods for her classmates to learn how to pronounce the words and follow the rhythm! Roaa also translated and explained the lyrics, which her classmates enjoyed.

“I thought it would be great to share something about my country with Americans, something more than them just listening to me talk about Lebanon. Teaching them the national anthem gave me the opportunity to listen to them represent my country, as well,” Roaa said. Given the success of the students in this effort, Roaa is already planning another interactive cultural awareness activity: she is going to teach her classmates the "Dabke," a traditional Lebanese folkloric line dance!

"The pride and happiness I felt while listening to my national anthem being sung by another nationality was indescribable," Roaa contined. "This is what the YES program is all about - cultural exchange!"

Here is the link to the video of Roaa’s classmates singing the Lebanese national anthem: https://www.youtube.com/watch?v=XPfgAodL6zc