Durfee HS Grad Traveled Thousands of Miles for her Diploma 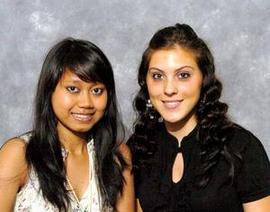 Photo from The Herald News

This article was originally posted in the Herald News and on The Herald News web site
By Derek Vital, Herald News Staff Reporter
Posted Jun 11, 2010 @ 10:36 PM
FALL RIVER —
Mentari Oktaviani proudly walked across the stage and received her diploma from B.M.C. Durfee High School Friday night.
Ten months ago, the exchange student from East Kalimantan, Borneo, could barely speak English. Now she is hoping to return to the United States in 2011 for college to study pre-med.
“I really enjoyed myself,” said Oktaviani. “This was a great experience.”
Oktaviani entered the country on a U.S. Department of State scholarship with the Youth Exchange and Study program. The cultural exchange program largely includes students from predominantly Muslim countries.
Oktaviani spent the school year with the Allard family, whose daughter Angela spent a month in Ghana last summer while participating in a program with American Field Service. Allard had a wonderful experience and persuaded her parents to take in an exchange student for the 2009-10 school year.
After overcoming the initial culture shock, Oktaviani immersed herself in the high school experience. She was a member of the Durfee color guard, learned how to play the piano and attended the senior prom, which she described as “really cool.”
Despite the language barrier, Oktaviani achieved A’s in all of her classes, except English. In the fall she was named student of the term by her teachers. She even found time to take, and pass, all of her MCAS exams.
“Durfee has been very helpful with Mentari,” said Allard. “The guidance counselors helped out a lot. They were really good with her.”
It was a very different experience from her school in East Kalimantan, which she attended six days per week from 7:45 a.m. to 5 p.m. and was required to wear a uniform. She described it as being similar to a military school, where students could be asked to perform push-ups as punishment.
“A lot of girls are Muslim and wear veils,” said Oktaviani. “The school is more strict than over here.”
Outside of school, Oktaviani got to visit New York City last summer. The trip took place during Ramadan, and being Muslim, she was unable to eat or drink from dawn until sunset.
“It was so hot,” said Oktaviani. “I thought I was going to pass out.”
Oktaviani also got the opportunity to tour Walt Disney World and celebrated Christmas for the first time.
“My friends that are Christians, they might get one gift,” said Oktaviani. “Here they get a lot of gifts.”
She tried her hand at kayaking during a trip to New Hampshire and attempted to surf in Newport.
“I heard ‘Angela!’ and I look at the water and see her standing on the surfboard,” said Allard.
Oktaviani will return to her homeland on June 28. She must complete one more year at her public boarding school to obtain her high school diploma. She is considering returning to the United States for college. High on her list is Bryn Mawr College in Pennsylvania, where Allard is enrolling in the fall. The duo have become like sisters, both having younger brothers and aspiring to work in the medical field. They plan to keep in touch throughout the school year.
“We’re pretty close,” said Allard. “I’m definitely going to miss her.”
E-mail Derek Vital at [email protected]
Copyright 2010 The Herald News. Some rights reserved
Share: