On September, 22nd 2012, YES Program Returnees of 2011-2012 from Bandung, held an event in MAN 1 Bandung (Madrasah Aliyah Negeri  – Islamic High School) to commemorate and to contribute for International Education Week which is the national project of Indonesian YES Alumni Returnees of 2011-2012. The theme of the presentation was Bridging Understanding, in which we hoped the presentation would help audience to understand better about culture of other countries.

We were very surprised with the number of student who showed up for the presentation. More than 200 students attended the event in a very enthusiastic manner. They were very attentive when each of the panelists who were not only of YES Returnees from Bandung, but also included a Rotary Returnee who in great enthusiasm, volunteered to be a panelist in the event, and another YES Alumni from Jakarta, told the stories of their experiences. 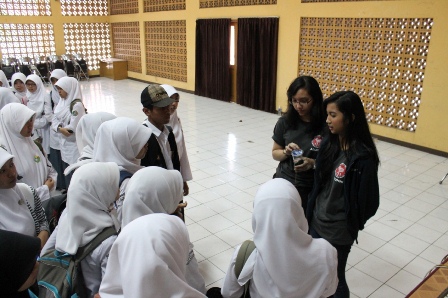 In the beginning of our presentation, we asked the audience what came to their minds when they heard the word ‘Amerika’ (United States).  Many identified it with the current president of United States – Barack Obama, a famous University in the U.S – MIT, the iconic Liberty Statue, McDonalds, or even an American Teacher who were a former teacher at MAN 1.

Lidya Sophiani, for example, told a story of a curious friends of hers who wanted to know how a Muslim exercises their prayers; Lidya decided to fullfill her curiosity by practicing it in front of her and her action was very much appreciated. Rininta Muthia, told a story of her friendship with a Muslim living in Israel which nurtured her empathy by learning the hardships that her fellow Muslim friend had to face.  Sri Izzati, the Rotary returnee who volunteered in the event, told the unique experience of living with a host family who took interest in learning Islam, despite of the different beliefs they had. There were many other stories brought up by Nabila Ratna, Vitara Caprinita, and Ibrahim Azizi.

Before the questions and answers session opened, we brought up the issue of The Innocence of Muslim video to elaborate to the theme even more. We asked the audience to reflect whether the rage and violent action shown in many Muslim countries might hurt the very true face of Islam itself. Many agreed that violence and rage is not the answer to the issue; they believed that there are many other options available to voices their opinions, disagreement or even anger.

When the questions and answers session was opened, many hands were raised up in the air! We were very happy to see this. We took as many questions as we could and answer them the best we could. 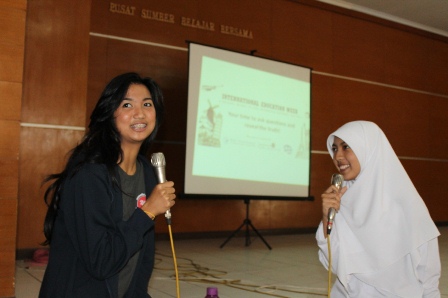 Some of the questions included : How did we cope with language barriers? How did we believe that we can make our dreams come true (to become an exchange student)? What American foods did we really eat in the US? What motivated us to be an exchange student? How does it feel to be left behind and to have to repeat a year at school, and one of a very interesting question which we had been anticipating is Why didn’t the US do anything to prosecute the video maker of The Innocent of Muslim?

Ilmi answered that patience, determination and practices in learning a new language is the main factor to cope with language barriers. Nabila anwered that believing in herself, and not being afraid of taking risks and chances are the answers to keep fighting for her dreams. Ibrahim Azizi shared that the US has very diverse foods; not limited to McDonalds and KFC but also cuisines from all around the world due to its equally diverse population. Vitara Caprinita shared that the curiosity about other parts of the world and other cultures sparked her interest to become an exchange student. Rininta shared that the experience, friends, family and knowledge which she had gained during her exchange year would never be able to be replace and is more than worth it to have to be left behind a year at school. Finally, Vitara and Lidya answered that each country in the world has their own constitution that  is upheld by the people and needs to be respected, including the US’s which protects human rights; and the rights of freedom of expression. The protection of these rights makes it very difficult – almost impossible for the US to prosecute the creators of the video.

A few motivation words from the panelist closed the two hours session of Intenational Education Week brought up by YES Alumni 2011-2012 in Bandung region.

The audience enthusiasm surprised us very much, as even after the session ended, many of the audience came to ask more questions about our experiences. We were all very delighted with the audience’s proactive and enthusiastic manner! 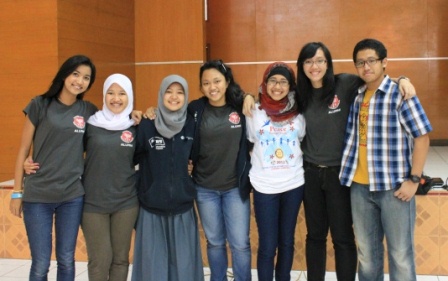