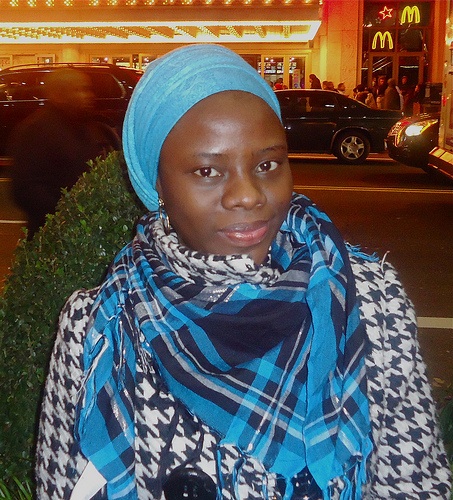 Aisha Waziri- In Feb. 2011, I received approval to be considered for a scholarship. That was the moment when I knew the YES program had given me a platform to start my life on. It was like an airplane beginning to take off, showing me the path to the runway. And yes, I took off, but only after trimming my crude edges and becoming an example of a true Nigerian.

I began observing the true identity of Nigeria around me. I saw Nigeria in the eyes of a hardworking shopkeeper. It was in the eyes of the elderly and in the hearts of the youth filled with zeal and fervor. I diligently continued fulfilling the myriad requirements of the scholarship; I wrote essays, did community service projects, but first and foremost, appreciated being a Nigerian. After that it was a series of rapid euphoric incidents, and my senses returned only when I stood at the airport in Washington DC, to realize the step I had taken.

I was astounded to meet people from around the world, which showed me we are all just part of one, united world. I was excited to meet the people who had openheartedly accepted a stranger like me. Surprisingly, I felt no surprise or culture shock at first because the Estes family welcomed me in a familiar way as if I was already a part of their life. Thus began a new journey with new companions, from whom what I have learned is impossible to summarize.

The rest of my days were spent in Poughkeepsie, NY. Gradually, I met new people and saw many new things which were awe-inspiring. It was a great fortune that my host mum was also an exchange student back in the 1980’s.  I practiced my religion and my host family was extremely tolerant of my religious habits. I don’t recall a single time when they would eat pork while I was around. I never intended for them to do so but it was a sign of their respect for my values.

Together with my little host sister and another exchange student from Pakistan, I enjoyed numerous occasions. Their jokes never failed to amuse me, and my laughter was forever ringing in the air. At school I met polite and charming teachers. I was at all times grateful for their efforts to include me in clubs, but I learned that in order to progress one has to take initiative. I joined four clubs: Future Business Leaders of America, Literary Magazine, National Honors Society and Interact club.

In the close-knit community of Wappingers Falls, I discovered many interwoven friendships and I was delighted to become friends with such people. They realized the stipulations on my lifestyle and appreciated the different aspects of my country. I reminisce about the time when they were all so inquisitive about me. With them, I developed a connection of full trust, love and fun.

We had slumber parties, movie nights and outings where I thoroughly enjoyed myself. I learned how significant friendships are. I always looked upon myself as a person who is relatively reserved, but my friends taught me that if you want to develop a long-lasting bond, it is crucial to be outgoing. I joined a lot of school activities. I can’t believe I went to my first bon fire!!

I got an insight on major religions of the world and also found out that to open one’s mind, a person has to be tolerant of differences and appreciate diversity. If I was adamant about my beliefs and tried to impose them on others, there would have been no possible way for me to find out about the wonderful aspects of other faiths. Several times during discussions, I stumbled across stereotypes about Muslims and Africa and I pondered over the choice I had. I could start arguing, which would inevitably be worthless, or I could talk to them and reason with people by getting my opinion across.

I quickly learned that if I don’t take the first step, people will be unwilling to approach me. People saw me as friendly and they were more willing to learn about Islam and Africa. I quickly realized I did not have enough time in America to quarrel with people or to tell them what I thought was right, because nevertheless, I was an outsider in their lives. The greater adjustment and flexibility should be on my side. They did their part by accepting and welcoming me, and it was my turn to repay their generosity.

I thank my host family who empathized with my discomfort in certain situations, but encouraged me to have fun. Christmas, Halloween and Thanksgiving are all not celebrated in the northern part of my country, more particularly the community where I came from (Muslim-majority community), but I enjoyed this once in a lifetime opportunity.

A few days before Christmas, I went to shopping with my host family and purchased lots of presents, which I refused to show them by pretending I got them for myself. The night before Christmas, they asked me if I want to go to a church and do a Christmas service. I was very excited and accepted the offer. I participated in every activity except few things that were against my religion.

On Christmas morning, I dressed in my red/green shirt that my host family and I made earlier, and the Santa Clause cap that was given to me by my amazing area representative Lorrayn Pickerell. I came downstairs to look for the plate of cookies and cup of milk that I left the night before for Santa Clause, and it wasn’t there. I just knew my host family picked it up and we all pretended Santa had it. We then went to pick the stockings Santa left us. He gave me so many things I really needed, then under the mighty Christmas tree, which we decorated early in December, received many gifts.

Words cannot express my feelings about. It was then time for me to give them my own gifts. I gave my host family gifts that they never expected from me and they felt excited. Everyone else liked my gift including the other exchange student from Pakistan, whom had become a sister to me in a short period of time.

During my entire stay I have been trying to expect the unexpected. I had the most superb time of my life. To end this speech is a huge task because many stories are still untold, but I will always remember the love of the people of Poughkeepsie, Wappingers Falls, and my host family’s amazing great line of understanding me. I have learned so many new lessons and have changed myself so much that I feel like a better person. Moreover, I have realized what a beautiful country America is and I greatly commend the generosity of it’s inhabitants. I found out what a prized possession I have in the form of Nigeria, and what role I, as a young person, have in building bridges between nations.

Lastly, I thank the sponsoring organizations and the U.S. Department of State for making such a massive difference in the life of a normal girl who once thought she wouldn’t be able to fly!