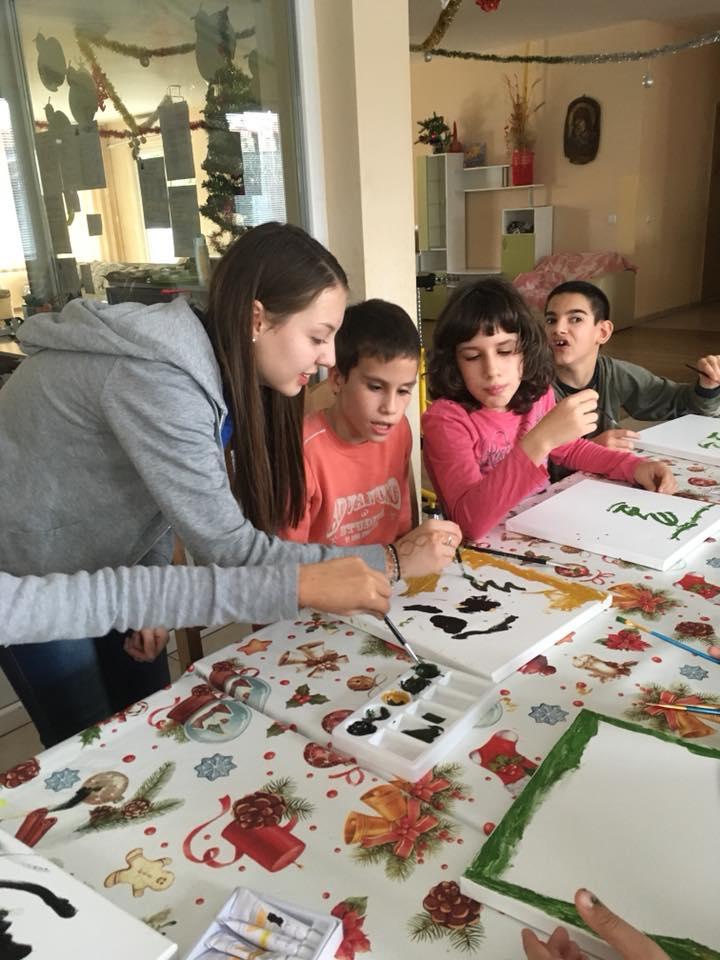 1. YES alumni in Bulgaria engaged children with special needs and disabilities with two projects funded by the U.S. Embassy in Sofia through the small grant component of the IDEAL Workshop. Nazmie Mustafa (YES ’16, hosted by YFU in Twin Lake, MI) worked with six Red Cross volunteers to organize a holiday-themed workshop for ten children with special needs in Kardzhali. Participants played games, sang songs, and created ornaments and cards that were later hung in their rooms. Each participant also received a package of toiletry items, which had been purchased through a fundraiser organized by Nazmie in which 18 parents and children made holiday-themed items that were later sold at a Red Cross holiday bazaar.

Mirela Minkova (YES ’17, hosted by American Councils PO in Edwardsville, IL) engaged seven volunteers in organizing an artistic workshop for 13 children with disabilities and special needs in Lovech. (Photo above.) Participants were encouraged to express what was in their imaginations through painting and drawing, an approach Mirela described as “therapeutic.” The artwork will later be displayed in a public exhibition aimed at demonstrating the beauty that can result when individuals of all types of abilities work together.  We think Naz and Mirela’s big hearts are a work of art! 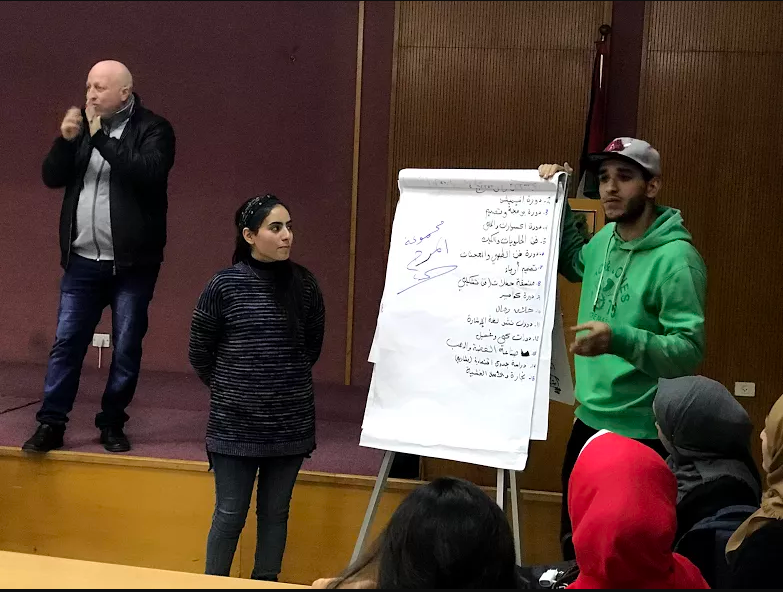 2. A group of YES and ACCESS alumni in Gaza City joined Atfaluna Society for Deaf Children for a two-hour training workshop. Funded by the U.S. Consulate General in Jerusalem, this training was focused on improving skills to advocate for greater social inclusivity and civic engagement for youth with disabilities in the Gaza Strip. The alumni also networked with 20 persons with disabilities to learn more about common challenges, success stories, and aspirations. The alumni engaged in discussions, practical activities, peer-to-peer brainstorming exercises, and group presentations, and they were introduced to a variety of skills and techniques for advocacy and lobbying, which they can deploy to defend the rights and hopes of young people with disabilities. These alumni are sure to work towards more social inclusion for their peers with disabilities!

3. Mariam Abdelkhaleq (YES ’14, Egypt, hosted by AFS USA in Vermontville, MI ) had an amazingly supportive and loving YES host family which included an autistic host brother. She and her host brother shared a passion for art and building things, and Mariam credits him with helping her see life from a new perspective. Mariam wanted autistic children in Egypt to have the same level of support from their families, communities, and schools, so she started basic art workshops for autistic children in Luxor and Aswan. Using skills she gained during a two-week internship at a psychotherapy practice in Berlin, Mariam provides art and music therapy for five children with autism and Down Syndrome twice a week. We applaud your great work, Mariam! 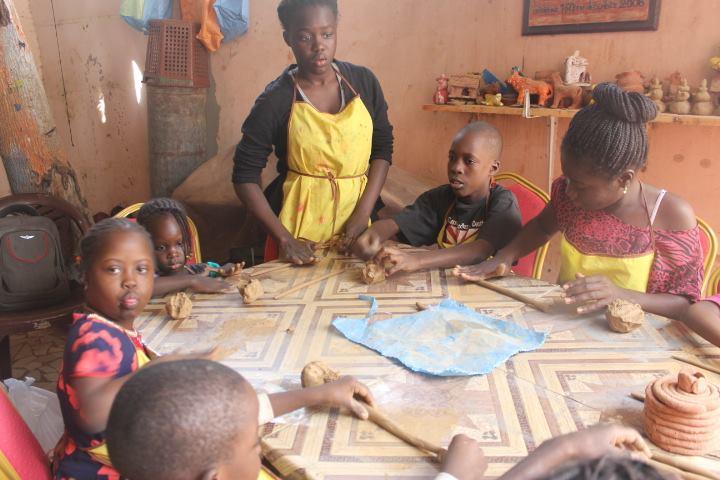 Alumni in Senegal create ceramic sculptures with children with disabilities.

4. In celebration of December 3, International Day of People with Disability, eight alumni in Senegal visited 20 children with physical and mental disabilities at Columbin Center in Dakar. The alumni helped the children create ceramic sculptures. At the end of the day, the group shared a snack, and the alumni presented the children with a donation of coloring books and pencils. Now that’s how you commemorate International Day of People with Disability!

5. Kristijan Spirkoski (YES ’17, Macedonia, hosted by AYA in Florence, SC) set out to use the knowledge he gained through participation in several workshops on human rights to organize a workshop for others. On December 21, Kristijan led a program for 15 young people at the youth organization Civic Leadership in Prilep Scholars Program. Participants explored topics such as disability discrimination and rights versus privileges through a series of interactive activities. Great initiative, Kristijan! 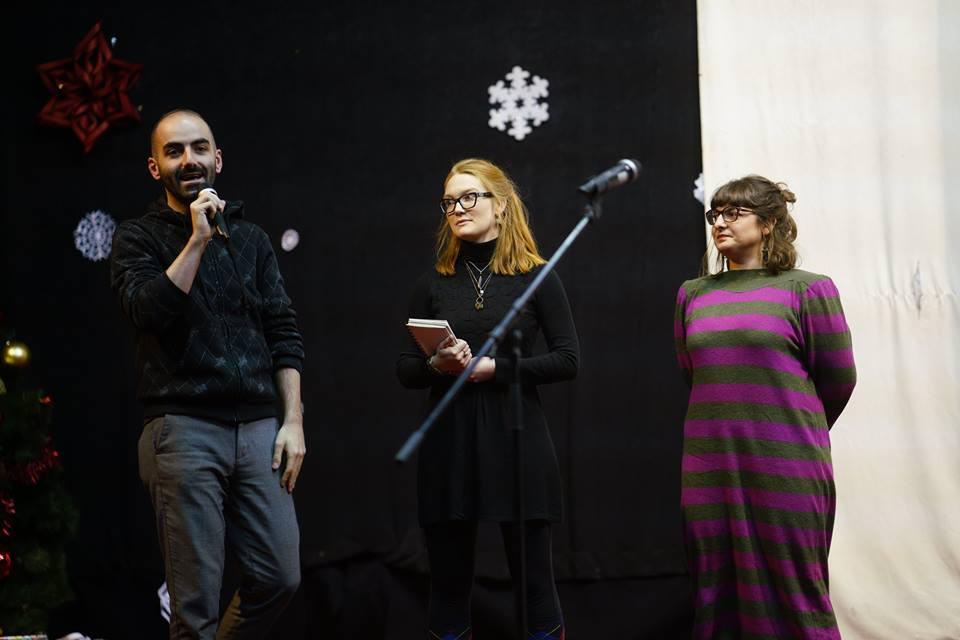 6. On December 23, a team of eight alumni held the third Kosovo Slam Poetry competition, an event supported by a small grant from the U.S. Embassy in Prishtina that allowed nine young poets to perform their original work in front of an audience of more than 150 people at the American School of Kosova. Participants addressed subjects including depression, racism, nationalism, and abortion. Thanks to the engagement of an interpreter from the Deaf Association of Kosova, the event was made accessible to members of the hearing impaired community for the first time. We call that a ‘slam’ dunk!