YES Alumni in Cameroon Work Together Toward Social Change

Four YES alumni from Cameroon, Joseph Lambe (YES 2012-2013), Patricia Meche Tamgno (YES 2010-2011), Clementine Noubosse Pafoule (YES 2010-2011), and Paola Wouappi (YES 2012-2013) have shown leadership through serving their communities. Joseph and Paola each received a 2014 YES Alumni Grant Award and Patricia and Clementine received grants after participating in the YES Alumni Transformational Leadership Training Workshop in Rabat in 2014. Joseph’s project, Save the Environment, and Paola’s work, Stopping Alcohol Consumption Amongst Youth, involved sensitization campaigns that educated their communities and encouraged conservation and prevention. Patricia and Clementine addressed conflicts and tensions in Cameroonian society. Patricia’s project, Who is an Albino? A Person Like You! – An Anti-Discrimination Campaign, focused on her personal story.  Patricia spoke passionately about this subject in her YESTalks video. Clementine advocated unifying Cameroonians through her project, Together Let’s Stop Tribalism. 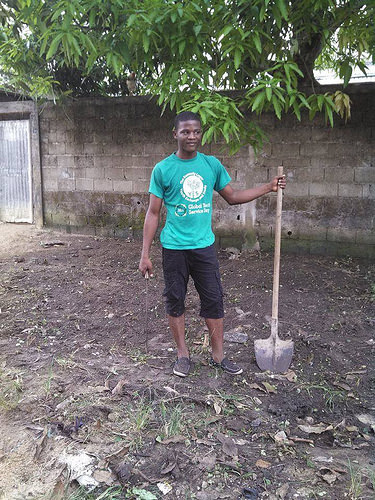 The YES program made an unforgettable, positive impact on my life. YES made me grow up mentally and gave me the courage to address issues that I believe hinder the development of my country. It is because of YES that I was able to start my community project, Saving Our Environment.

I noticed that in Cameroon, many people were not aware of the dangers their communities were facing due to poor sanitation. For instance, in Cameroon, sewage and garbage disposal are not handeled well, and in some areas, drinking water is not safe. Furthermore, many Cameroonians are not educated on how to maintain proper hygiene and sanitation in their communities and homes. They also lack adequate cleaning materials, like insecticides, disinfectants, and other chemicals to kill germs and mosquito larvae in standing water. The few cleaners that are available are either poor quality, or too expensive for most people to afford. In addition to that, the lack of infrastructure and the harsh climate also contribute to a lack of sanitation, causing excess dust during the prolonged dry season, and muddy floods during the rainy season.

All of these problems motivated me to address public sanitation and hygiene in my country.  I felt these areas needed immediate attention in order to improve the well-being of the people, community, country and nature. Thus, I initiated the Saving Our Environmental project in my hometown, Douala. I am happy to report it was a great success.

This project was conducted in two phases. We began by cleaning the main road and four other streets. We cleared the tall grass, emptied the gutters, swept dirt off the road and removed the stagnant water. After that, my fellow YES alumni from Cameroon helped me run an education campaign in which we made presentations to the audience with respect to research topics.

This project was aimed towards educating youth, so I was especially happy that nearly all of the youth in the area attended and assured me that they will continue working to improve the environment. For me, the project was a real success because I believe it had a life-changing impact in the participants’ lives. 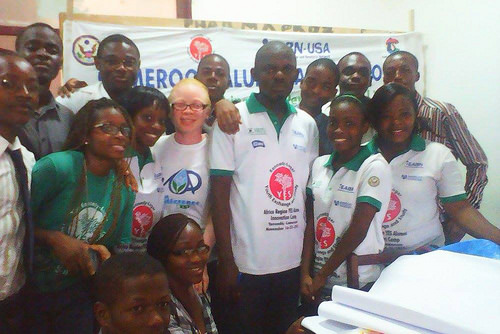 WHO IS AN ALBINO? ... A PERSON LIKE YOU! – An Anti-Discrimination Campaign

I was born an albino. This means that there is a lack of melanin in my body, which results in non-pigmented skin. Some people find it really weird to see a ‘white person’ having black parents. It happens to a good number of children around Cameroon and other countries in Africa. For many years now, people have tried to explain this ‘strange’ skin color, and their lack of knowledge on the issue has resulted in numerous misinformed beliefs. Thus, albinos often face discrimination at school, work and other public places. The discrimination is even worse in rural areas, where many local people believe that sacrificing albinos will bring luck or wealth.

Due to all of the injustices albinos face around the world, I initiated the project, "Who is an Albino?...A Person Like You." Since the future will be molded by youth, I decided to aim my project at educating students who attend my college. I felt it was really important to educate them on what it really means to be an albino; that it was just a lack of pigmentation and it has nothing to do with being cursed or granting luck after sacrifice.

I partnered with a college association called AEDO: Association des Etudiants De l’Ouest, and we invited many students from various departments and universities. We organized a workshop to discuss albinism, and together we tried to find some solutions to help reduce the injustices albinos face every day in our town. The workshop was held in early spring at my university, and about 70 people attended. Four other YES alumni made presentations during the workshop. After their presentations, we split the participants into small groups in which they discussed what they used to think, see and hear about albinism, and then presented to the whole group. We heard a lot of typical beliefs such as; “They are very fragile.,” “Sun rays can negatively affect their skin,” “They have weak vision and most of them wear glasses," and "They have a very restricted diet, most of them don’t eat shrimp or palm oil." However, some people also shared more upsetting ideas, such as, “They are sacrificed in the Northern part of the country because their bones bring luck,” or “They are sometimes perceived as a curse, sometimes as wealth.” Only one group knew that albinism is a genetic disease that causes a lack of skin pigmentation, which makes albinos sensitive to ultraviolet rays.

An audience member shared about her experience as an albino in the professional world, and then there was time for questions and answers. Before the workshop concluded, the YES alumni explained what it has been like to be friends with an albino, how we live and laugh together, and encouraged the attendees to have this wonderful experience!

(Patricia was hosted in Coos Bay, Oregon from  2010-2011. Her placement organization was AYUSA.) 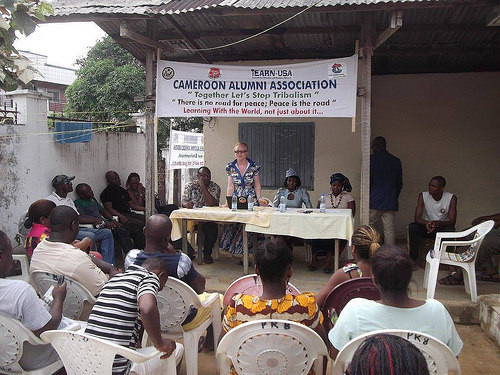 I conducted the "Together Let’s Stop Tribalism" project because I noticed that, in my neighborhood, many conflicts arise because many people are tribalistic and prefer sharing things and ideas only with people of their same tribe. These conflicts arises from having different cultural outlooks, traditional thoughts and beliefs, a sense of superiority and poverty.

In early spring 2015, the Cameroon YES Alumni Association worked with a youth association called Génération Active de Kondi (GAK) to hold a meeting for 50 youth and their parents. Together, we presented the negative causes and effects of tribalism in schools and in society. We also discussed different approaches that could help solve this conflict. After the presentation, we started a group discussion. During the debate, some participants were for, and other participants were against tribalism. One participant said,

"Tribalism is good because in a marital situation we will be speaking the same mother tongue, meals are shared and the marriage will last longer than the marriage of two people who come from different tribes.”

However, on the other side, one participant said that tribalism is a barrier to the development of a country, and being a tribalist can lead to wars and hatred. With all these diverse ideologies, many people were moved and enthusiastic to have been part of the project.

(Clementine was hosted in Sturgeon Lake, Minnesota from 2010-2011. Her placement organization was AYUSA .) 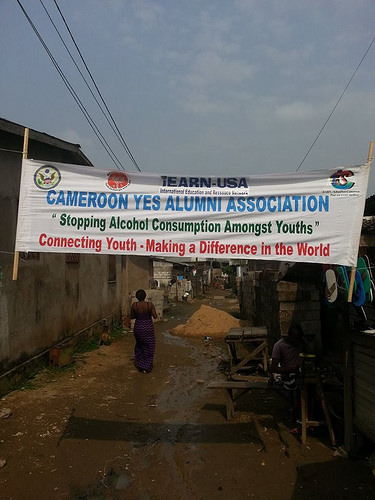 Three years ago, I was a little girl who was content with my life. I had no special ambitions; I did no special activities; I lived in my own space. Other people’s lives were just not that important to me. I didn’t care about what happened around me, and did not help others. Then, I went on the YES program and my boundaries opened up. I started having hope and ambitions, and I started to get involved in my society.

On December 31, 2013, something terrible happened. My classmates attended a New Year’s Eve swimming pool party that ended in a catastrophe. The party had food, music, a swimming pool and lots of alcohol. A friend of mine, who was only sixteen years old, and was unable to swim, became intoxicated and decided to jump in the pool. That was the last time he was seen alive.

Can you imagine a young man, full of life, suddenly lying as if he was asleep, but unable to wake up?! Here in Cameroon, our society has serious issues with drinking, and alcholism is prevelant, but not discussed openly. I decided to address this problem myself, although it was a difficult task.

The goal of my project was to make young Cameroonians aware of how bad excess drinking is, and how much more there is to life. We decided to conduct this project during Christmas break, since that is a time when people drink a lot, and to involve high school students, university students and parents.

The workshop began with a brief introduction to the purpose of the gathering. Then, one by one, the alumni presented research that they had done, including a scientific explanation of what causes drunkenness, a discussion on alcohol-related health issues, and an explanation of why the drinking age is 18 in Cameroon. Evangeline Safeh, president of the Cameroon YES Alumni Association (CYAA), presented about addiction, its effects and how to break addictions. After the workshop, one young lady said, “Really, with all that I learned today, I am now almost scared to raise a bottle of beer up to my mouth. I hope that it will have a great impact on the lives of those present today and that their experience will be shared.”

I hope that those who were present will share what they learned with their friends, and the knowledge will continue to spread. Thank you to the YES Program who introduced me to this exciting world. Thank you to the U.S. State Department who helped with the funding and to iEARN SchoolNet Cameroon who supported me in this project.

(Paola was hosted in Bloomington, Indiana from 2012-2013. Her placement organization was CIEE.)